I've implemented some rudimentary pathfinding algorithms, I did an overhaul of the GUI, created a new vehicle and did some other interesting stuff. ;)

A happy new year to everybody,

First of all, I am very sorry for the slow update rate. It's really hard for me to show the progress I've made if I think it doesn't look good or just isn't enough to show but after about two months since my last update I just had to give you a sign of life.

So, here we go, that's what I want to show you now:


When I started adding props I realised two problems:

The following paragraphs will explain the solutions to those problems and their impacts. This section will end with a small glimpse into a new model that I've created.


I increased the subdivision of cells/tiles from 2x2 to 3x3. This has some implications on the internal datastructure and increases the highest possible number of vertices per chunk. Especially the last part isn't good since I can't increase Unity's built-in vertex limit of 65535 vertices per mesh*! In case it does affect real use cases in the game I already have some fallback solutions.
For people interested in technical details: Unity uses unsigned short for vertex indices and it's not possible to make it use unsigned int instead. 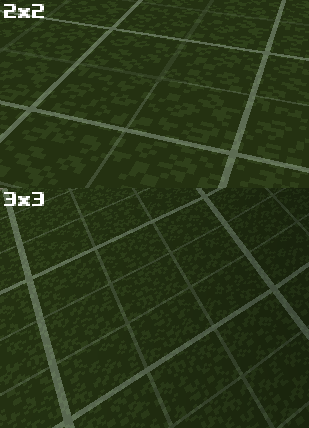 Comparison of 2x2 versus 3x3 SubCells

To make the frequency of details of tiles, walls and props match each other, I increased the tile atlas from 1024x1024 to 2048x2048 and, of course, I also adjusted the corresponding tiles and wallpapers accordingly. As a positive side effect the walls and rooms now feel bigger and doors and windows can become finer in detail as well which won't make them look clunky anymore.

The cooker/stove is inspired by cure's Kitchen Scene

Get to da Choppa!


Since programming all the time can be tedious and exhausting I sometimes need to take a break from it by doing more art related stuff. The helicopter you see here is almost done. Just those black rockets still need a real texture.


The last section is meant to show you the progress I've made in interactive areas of the game. Pathfinding, for instance, is roughly implemented, now. The Graphical User Interface was in need of an overhaul since some more buttons were required to supply new functionality like an undo and redo mechanism.


The first half of following video shows you the pathfinding routines and the second half a small preview of the new GUI. Both features are subject to change! The performance of the pathfinding for instance needs further improvements.

Right after my own implementation of some pathfinding algorithms, I've bought a license for the A* Pathfinding Project from Unity's Asset Store. It supports multithreading, path modifiers, door and elevator nodes, etc. It hopefully will safe me a lot of time.
For similar reasons I've also bought Edy's Vehicle Physics package. The cars now feel much better! During the next months I would like to invest time into both topics (cars and pathfinding). I think it's really important for me and for you to see some life in the game. Some basic pedestrians and a rudimentary traffic system would add a lot to the atmosphere of GWAIN.

Last but not least I'm thinking about changing the name of my project. If you have any suggestions, please feel free to use the forums or tell me in a comment. I am looking forward to here from you. :)

Wow this is cool! Is this unity free you are using?

plus i would like to help in the textures :D!

Yes, the roof model isn't done yet. There are so many things left to do that I sometimes don't know where to start. :D

@HelpWithTextures: I plan to make the tiles modifiable as in Minecraft, so you will be able to create your own ones.

I am in love with this game already. The retro(esque) feel is done perfectly already. I cannot wait to see what this game ends up being!

When you're prototype, The slow gui movement is very annoying. There should be an option to increase actions such as digging etc.

Most of your points are fixed in my current build except for the movement speed. The cars need to be able to drive noticeably faster than the player but if they drive to fast, they might get to fast to the edge of the world (like flying to fast in Minecraft). But I'm sure that I'll find a way to deal with that.

Thank you for your feedback. :)