Note: Having played around three versions of Imagination World 2, it seems that the mod is prone to crashes, freezes and other bugs. Two EDuke32 versions have been included in the package so it is recommended that if you run into difficulties with one, you should try using the other. For example, the older included EDuke32 version may crash to desktop when saving in some of the levels. This and other issues forced me to use the version named "EDuke32D.exe". Despite this, I still ran into difficulties such as overly black textures, random crashes and choppy fps. The mod is a bit demanding so you may want to lower the screen resolution. The mod is standalone, i.e., Duke3D is not required.

The Review: James Stanfield's Imagination World 2 is a massive 6-episode Total Conversion. I reviewed the first Imagination World years ago and haven't touched it since. The first three episodes of IW 2 basically comprise the first IW but the maps have been given a major graphical revamp.
The mod takes place in an impressively comprehensive, diverse and large fictional universe (to be continued in the upcoming "AMC TC") where an EDF agent James Stanfield finds himself in the middle of an epic adventure.

The first three episodes are thematically diverse with level themes ranging from urban locations to space ports, extrasolar planets, underwater bases and much more. Obvious shortcomings in the design department are easily compensated by interesting locations and fun gameplay. The maps are short, rarely going over ten minutes which is to my liking. Textures have been borrowed from many sources and nearly all sprites have been replaced with 3d models which obviously contributes to poor framerates from time to time, although I was more or less able to get rid of performance issues by decreasing the screen resolution all the way down to 1024x768. Then there are some effects that utilize some of the latest EDuke32 features, including a hugely impressive skybox feature. 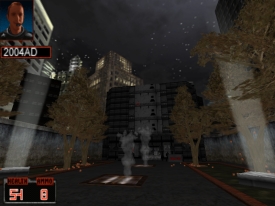 The levels are full of life and action. Particularly in the urban maps you've got civilians (although barely mobile) on the streets, sights & sounds and hovercars in the background. The aforementioned skybox feature also contributes to this sense of a relatively dynamic world as opposed to everything you've gotten used to in Duke3D-related projects so far. Through posters, advertisements, logs and so on you quickly learn that there's a history behind all the stuff you come across and leave behind. There are many pop culture references and insider (AMC) jokes. One of the most noteworthy features is the brilliant soundtrack which, as far as I'm concerned, should compete with games such as Unreal for the "best soundtrack in a video game" title.

Then there's the fourth episode, made specifically for IW 2. While all the previous episodes were of the basic run & shoot variety, the fourth episode is a lot more storyline oriented. The first map, a futuristic city, is a good example of everything said in the above paragraph. After this things get weird as James ends up in Alaska and gets lost in time. Somethings goes wrong and to prevent it from happening, James has to stop a man named Magnus. Teleporting from one location to another in the fourth episode provides a convenient excuse to bring forward various exotic locations. You don't see much of standard action until the fifth level which is a well-timed "adrenaline fix" in the middle of an otherwise untypical episode. This is one of my favorite levels, as you have to jump from one moving car to another while the surrounding cityscape keeps changing. After this there's an infiltration mission where you end up driving a motorcycle in the second vehicle session (there's a hoverboat sequence in the third episode) of the mod. The episode ends with a fascinating and awe-inspiring "weird" map where you're given a choice between two endings which both bring the whole thing to a very satisfactory conclusion.

If the four episodes leave you thirsty for more, there are two more episodes to go. The fifth episode consists of three "guest maps" made by Stephano Lessa, Geoffrey "Fakir" van Dijk and Rob Wijkstra. The sixth episode introduces the "defense mode" where you first pick a character, then a map where you need to survive waves of enemies. 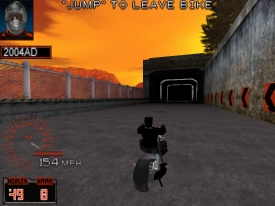 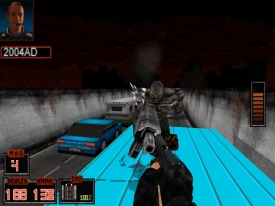 While most of the praise has so far been directed at the levels and their background, it's the gameplay that makes the mod fun to play. The weapons are good-looking 3d models and they pack a lot of firepower. There's nothing unique about the arsenal; you've got all the standard toys from assault rifles to rocket launchers and plasma guns. But each feels useful and instead of resorting to using one weapon all the time, you're compelled to use all of them out of sheer pleasure. Your foes are 3d models as well and the mod quickly resorts to recycling the two-three standard enemies from one level to the next but this is pretty much the way it is in arcadish shooters. There's a new boss at the end of each episode.

Of course IW 2 is not without flaws. As mentioned in the opening paragraph, performance issues are frequent and may severely affect the gameplay experience. (These only barely affect the score since the "release candidate" playthrough that serves as the basis for this review was relatively trouble-free.) The relatively plotless advance of the first three episodes stands in contrast with the fourth. Sometimes you have to deal with enemies blessed with superb marksman skills in cramped environments. The fourth episode might feel confusing after three action-filled episodes but you've really got to approach it not expecting it to be simply another collection of short "run & shoot" maps. There were bugs in the version I played and these may have been fixed for the public version but then again you may run into a few more depending on which EDuke32 version you end up using.

Conclusion: As the overall tone of this review may suggest, I really had a blast playing Imagination World 2 and will surely return to it every once in a while. What makes it work is the combination of fast-paced gameplay, awesome soundtrack and an interesting universe. 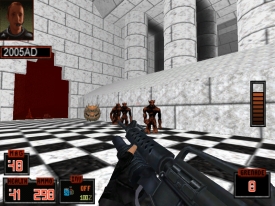 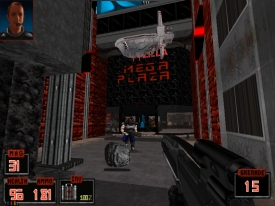