A video with International Space Station and a descent to Earth surface.

I/ITSEC, the world's largest modeling, simulation and training conference this year took place in Orlando. Although we weren't exhibiting, we still had a representation there. Packed with Alienware M11 notebook and a bunch of brochures, our friend and US partner Robert Francis was having several meetings with the attending companies, teasing everybody in range with images and videos. 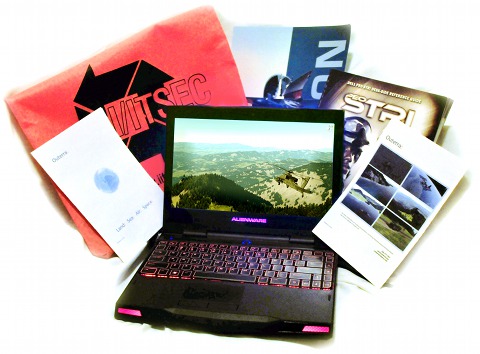 He was showing some of our older videos, as well as some newer ones with ISS space station and alpha version of ocean rendering. Even though the ISS model was using only default materials and wasn't quite finished, it's been a great hit - together with descending to earth surface it showed the scale of the world nicely. After showing the videos he ran the demo version on the laptop to prove the thing's real.

Robert is saying: The reaction received was extremely positive. Many times when demoing to one person they would call their team members over excitedly so they could see the demo. Several groups said that they would meet as a team to discuss options with us and would be contacting us soon.

Here's one of the videos with ISS, descending down to a bay with docked USS Bainbridge ship. Don't mind the bugs visible on the water - they have been fixed already for the presentation.
A blog about the new features in engine will be coming soon.

Incredible! I've been watching your engine for some time and am still impressed every time by the huge scalability. I've honestly never seen anything like it.

check out the infinity engine, although they don't update anywhere near as much as outerra

Cool! I love this engine.

Not bad water simulation. From orbit we can see what look like rivers - are those REAL, or did you do some elevation hacking to get the appearence of rivers?

You guys are catching up with the Infinity: TQFE engine fast. There's still some biggies though: multi-resolution shader and bump-mapping support, several advanced lighting methods, and procedurally generated celestial bodies. Best of luck in the future

Those are the river beds, you can see them because tree placement function skips those areas. Rivers will be coming later.

keep it up guys love what your doing here

ive been following this from the start and its really great to see how far you've come.
Congratulations guys.

Alienware's alright, but really overpriced. About $2,000 of the cost is for the logo. :/

Whhhoooaaaaa
This just keeps getting better and better.
GJ.
Can't wait for this to be picked up for CoD 10 :D

CoD? What a waste of the engine. There's not much point in a worldwide sandbox for a game like CoD.

but on eve online or other games like that (freelancer etc)