Post news RSS I fixed a few bugs in /game/, and the game is now playable offline

Bug fixes include signs working the way they used to, players below the map correctly dying, and a few minor things I’ve forgotten about, including stairs! The big news is that the stand alone client is pretty much finished!

Bug fixes include signs working the way they used to, players below the map correctly dying, and a few minor things I’ve forgotten about, including stairs!

The big news is that the stand alone client is pretty much finished!

I will spend the rest of the week phasing out indev and infdev in favor of /game/ (where all future updates will be) and resting. And a Seecret Friday update.

Next week, I will start working on Multiplayer Survival mode. 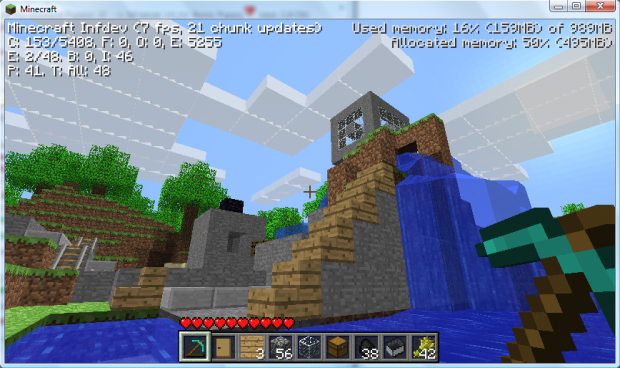 Edit: And another thing..

Sound does not work on Mac at all. I have no idea why, and I will probably have to write my own software sound engine.
But, the game itself (with sound turned off) should run much better now with the download version. At least it does for me. The applet version had two really really severe issues on mac; it didn’t get enough ram allocated, and it didn’t properly release resources, which kind of fed into the original problem.

I’ve been getting mixed reports about the downloaded version. It seems to work great for some people, and some say they still can’t run the game. Make sure you’re running the Sun JVM. I know other JVMs “should” work, but I put those quotation marks there for a purpose.

[EDIT:] Ah, the mouse issue! I forgot about that!! I’ll get my Ubuntu installation to work so I can actually test things first hand..

Piracy is bad. I don’t like it, and I worry about it. But I also know how horrible things like DRM and crippling copy protection schemes can be.
I will always value the needs of the legitimate player more than I will waste time worrying about potential lost income from a pirate. Sure, I’ll do whatever small things I can to combat piracy, but not at the expense of making the game suck.

I’ll keep the links up for as long as there’s no multiplayer and creative mode in the “normal” game (ie the version that was called “infdev” up until yesterday), and for as long as there’s no free demo. But as soon as all that is in place, I’ll remove the links to it from the front page, but it will still keep running from the same urls with the same functionality. So bookmark it, if you like it! You’ve only got [TIME ESTIMATE CENSORED] left!

offline mode! finally! now, the exe is all you need for infdev, uh, I mean, game XP
so, infdev is obsolete, indev will be merged eventually, and then, SMP!! ^^

OMFG! YAY!!! Btw, how dose it know that your registred when your offline? Dose it download a file with accs when your online that checks if it's vaild or something?

It asks for user name and PW when opened

Yea, but how dose it know that I bought the game?

you need to login and have "remember me" ticked. it goes to the site, verifies your user/pass, then you can play offline. ^^

but wouldn't the game have a problem when your not connected to the internet at all? or does it require internet to prove you bought the game then it allows for offline play?

it allows after you connect. only requires one connection =3

Aha ^^ I thought that you could start it offline :P
Idea for making it able to run 100% offline: Make the game download a encrypted file that has all usernames and passwords. Then the games check the username and password from the file. And everytime you connect to internet it updates the file for new accounts. I don't know if this is a good idea but I just wanted to suggest it. :P I don't care if you have to be online to start the game, I just wanna run it from my desktop in fullscreen mode ;)

but that idea would take up A LOT of room on your computer, sure, 1 account on its own is very small, but those will build up, if they did that with GMod, or any other Steam Game, they probably would take up half your hard drive!

Wow, really cool work man!
I will try it!
But pls remove the "centre" there.
Little mistake, I know them too ^^
Anyway, great work man!

I'm really sorry for annoying you btw =[
I'll try to make the posts better in future!

lol, thats nothing bad, to me it happnz always, because I never really was a friend of those codes xD

I annoyed them with a lot more than just that, or so I hear. x.x

anyone? making possible to combine torch with glass, and then you can place underwater lightings?
G0
T0

This runs so much more stable than the online application! I can now load full range view at 60 fps rather than low range at a laggy 4 fps. Ya done good Notch.

How big is the Game World?

Minecraft got on the spotlight!

thinking about buying are u able to play survival with 2 players?

o my bad should of read before i posted:/

I played some scary games before, but I don't think I have ever been more scared playing this game, after I first encountered a skeleton in a cave I was trying to branch. Had no idea they could spawn underground, and I thought I could willy nilly put torches in there without having to worry about anything.

Seriously, seeing that skeleton made me scream.

Omg its exactley the same as me, this game scared me more than doom 3. I was down in the cave and then the skeleton shoots at me randomly after hearing footsteps in the dark and it scared the hell out of me! I jumped and hit my keybord LOL

I bought the game just now, it doesnt let me download the client :\

Ive sent an email to support...

nevermind support got through to me very quickley :D

Love this game. Can't wait to see what else you add.