Post news RSS I am now back on DBolical after almost 2 months...

Now I'm back with a new PC, but is it powerful enough to play Minecraft? 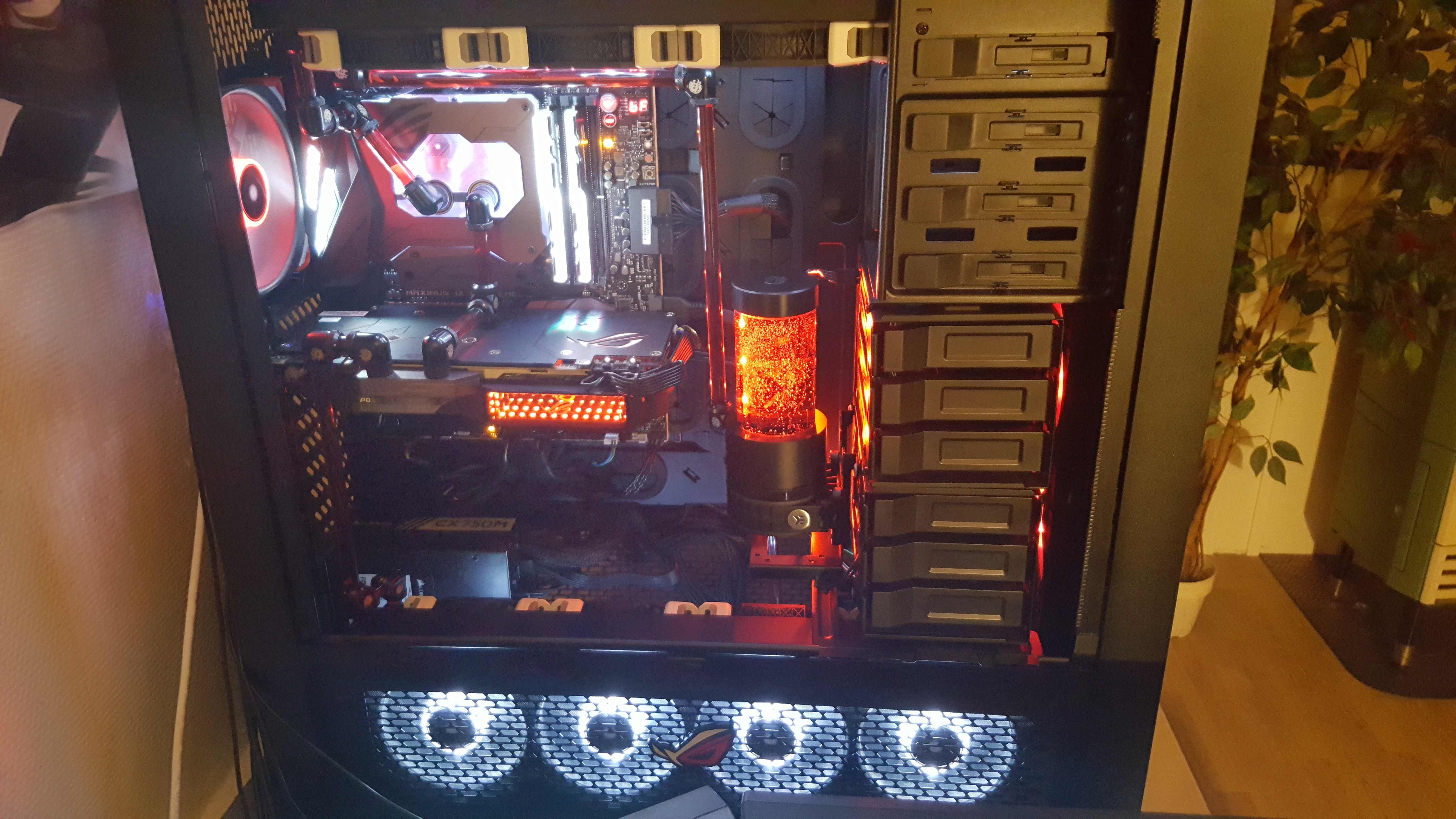 I am now back on DBolical.com after almost 2 months...

~ Now I'm back with a new PC, but is it powerful enough to play Minecraft? ~

I thought it would only take 2-3 weeks to make sure I got all the parts for my new PC, but it was incredibly bad with the shipping and that the company did not get the item I wanted.

What was most annoying was that the company did not say anything to me in over 3 weeks of waiting... I tried everything I could to buy all equipment here in Norway, without buying everything that i needed from other countries. So I could just jump over by paying for the tax and more in shipping, but that didn't work after all...

The first delivery was damaged on the up side part of the motherboard, which was easy for me to fix right away, but they send me other one as an apology for the waiting time and shipping damage. They were specific that you should get what you pay for, so one more for free, yeah!

The motherboard, graphics card, CPU, Ram, power supply and fans was ordered here in Norway. The rest of everything else is from other countries, such as Germany, Denmark, Japan and Taiwan.

A lot of waiting time, but the goods came to me in the end, just took a couple of hours to put the PC together... All information about this new PC can you read here:

I plan to insert 16GB more Ram later, when the company gets more of them back in. I really want a better processor, but you can not get a better than the one that's already in there for this motherboard. Below you can see more images of how the PC looks like before the liquid. 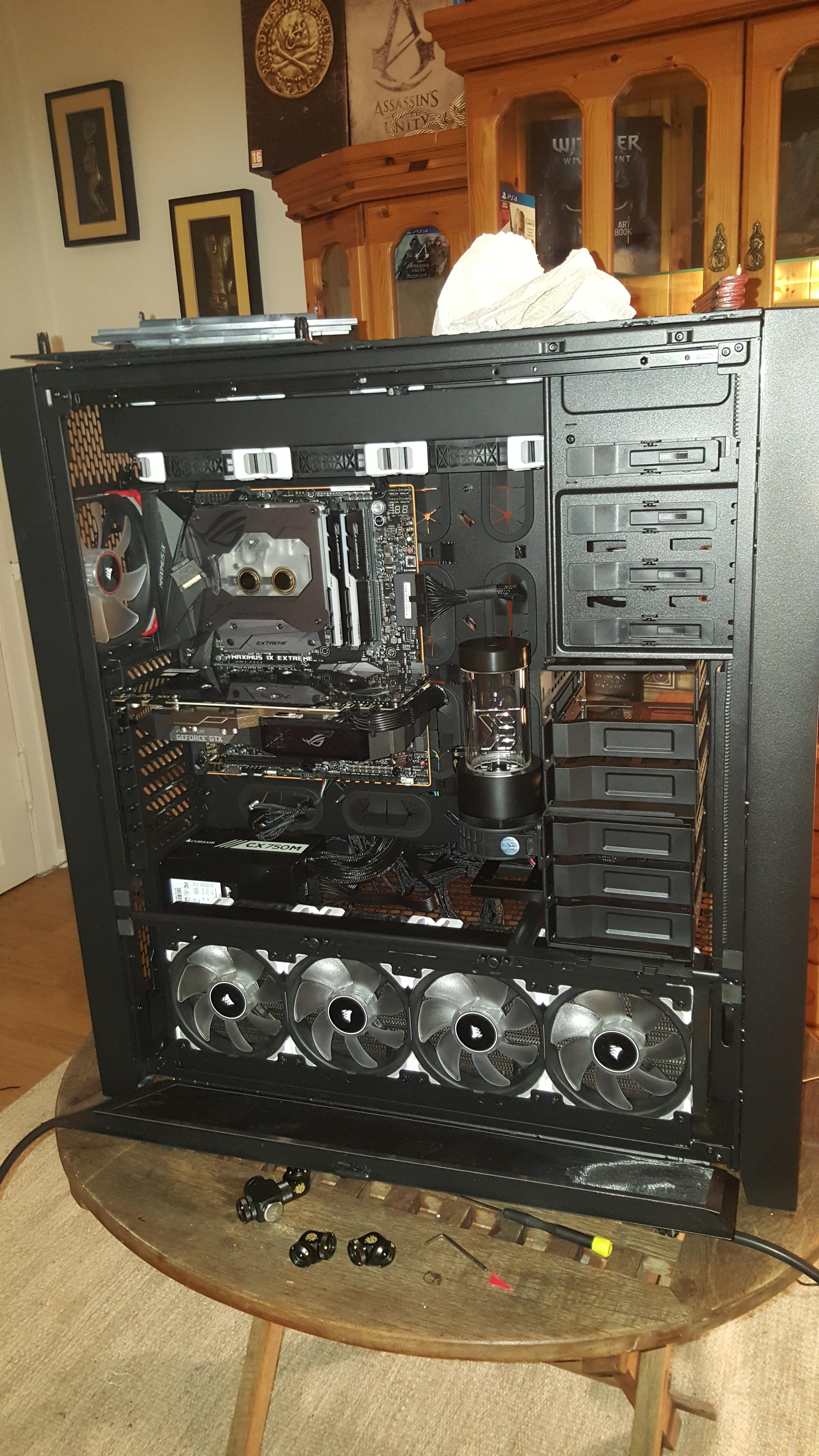 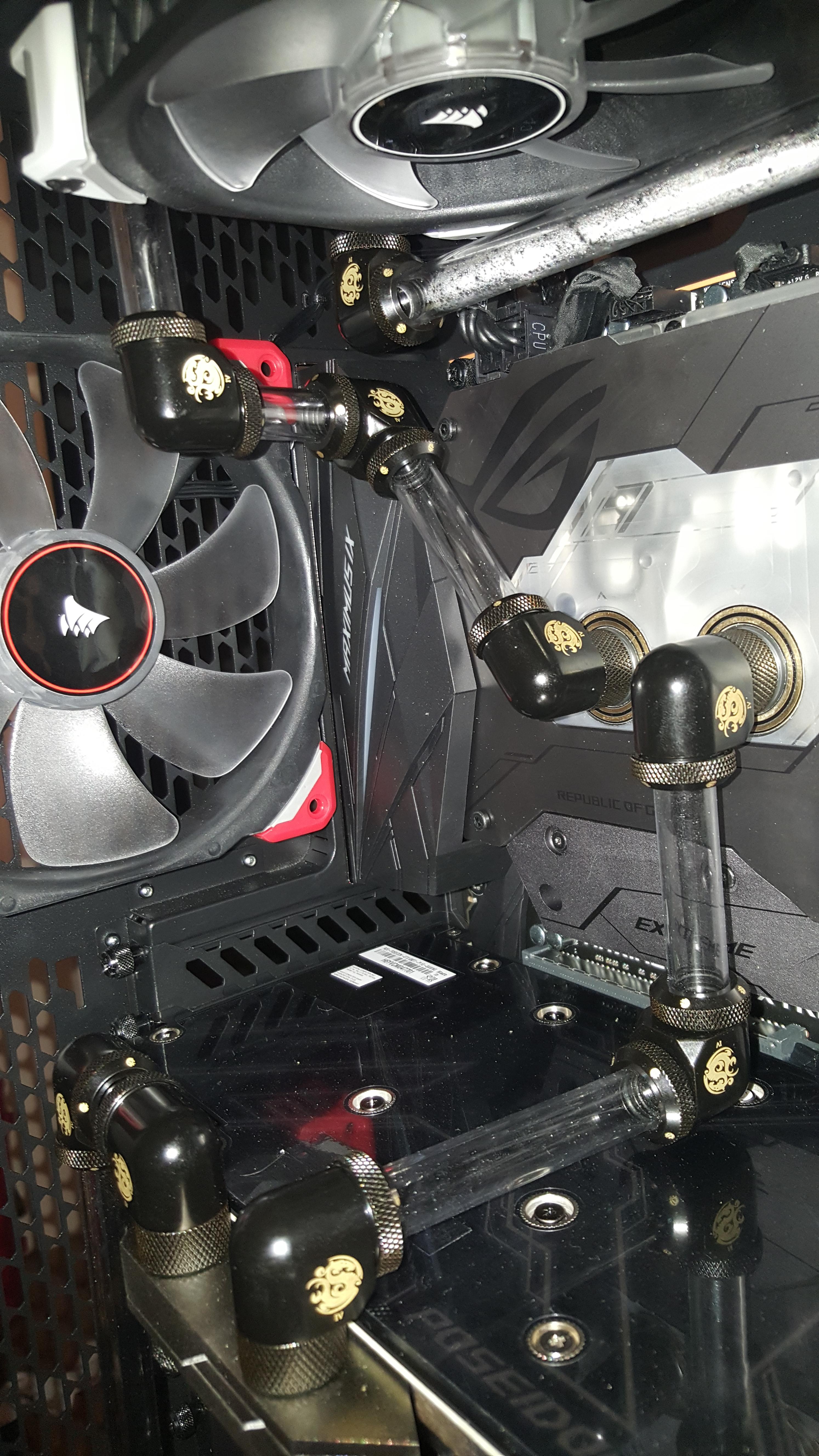 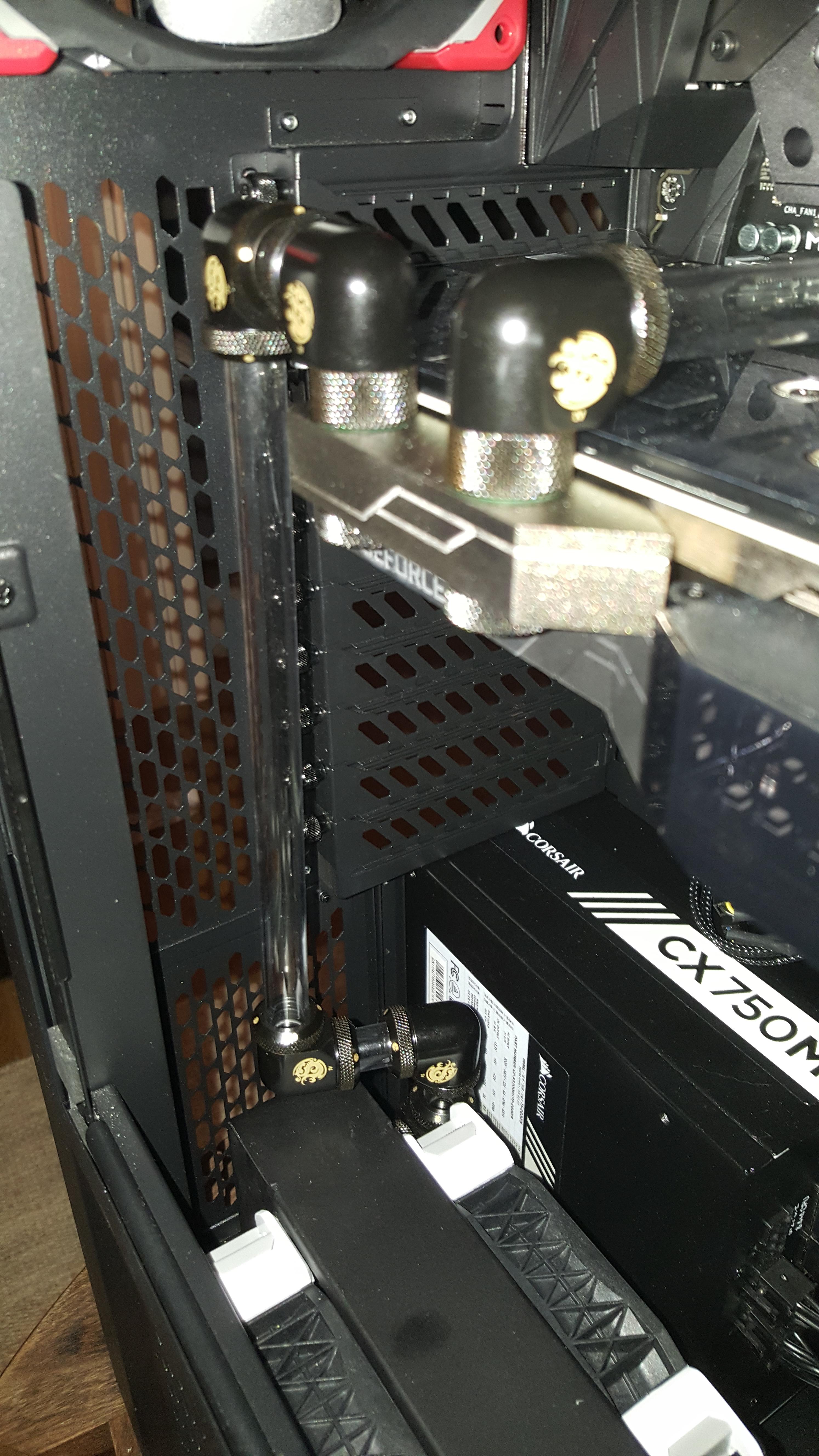 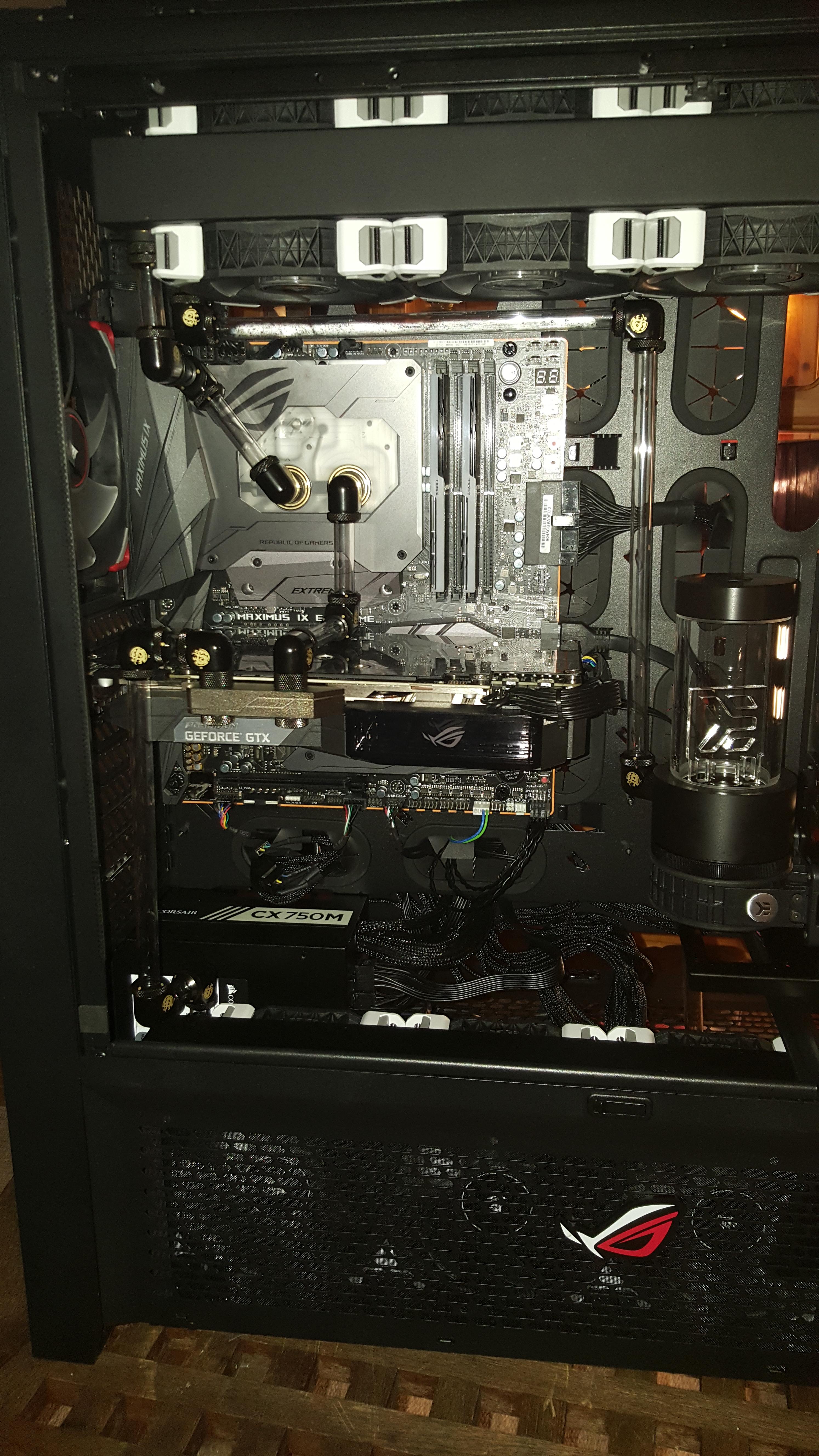 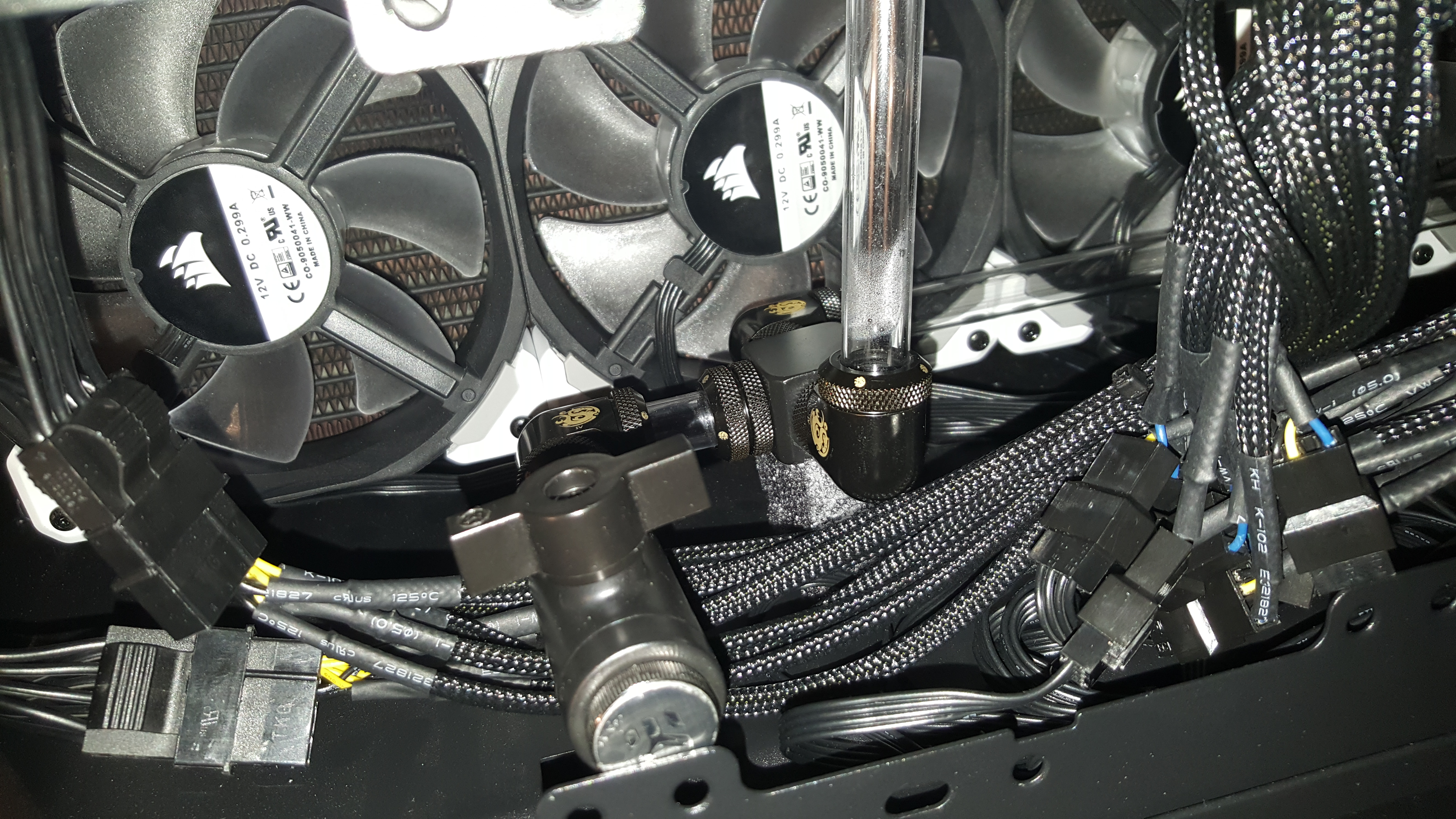 This was my first time that I worked with something like this, I was enough lucky that there was no leak. I had not been able to wait for several more weeks for more parts if I needed it now. I had a few screws, tubes and liquid after the first attempt. Some of the screws are from EKWB and Barrow. I first ordered from EKWB, but there was so much wrong with the shipping that I had to buy from somewhere else, I only got a few things from that company that I used. 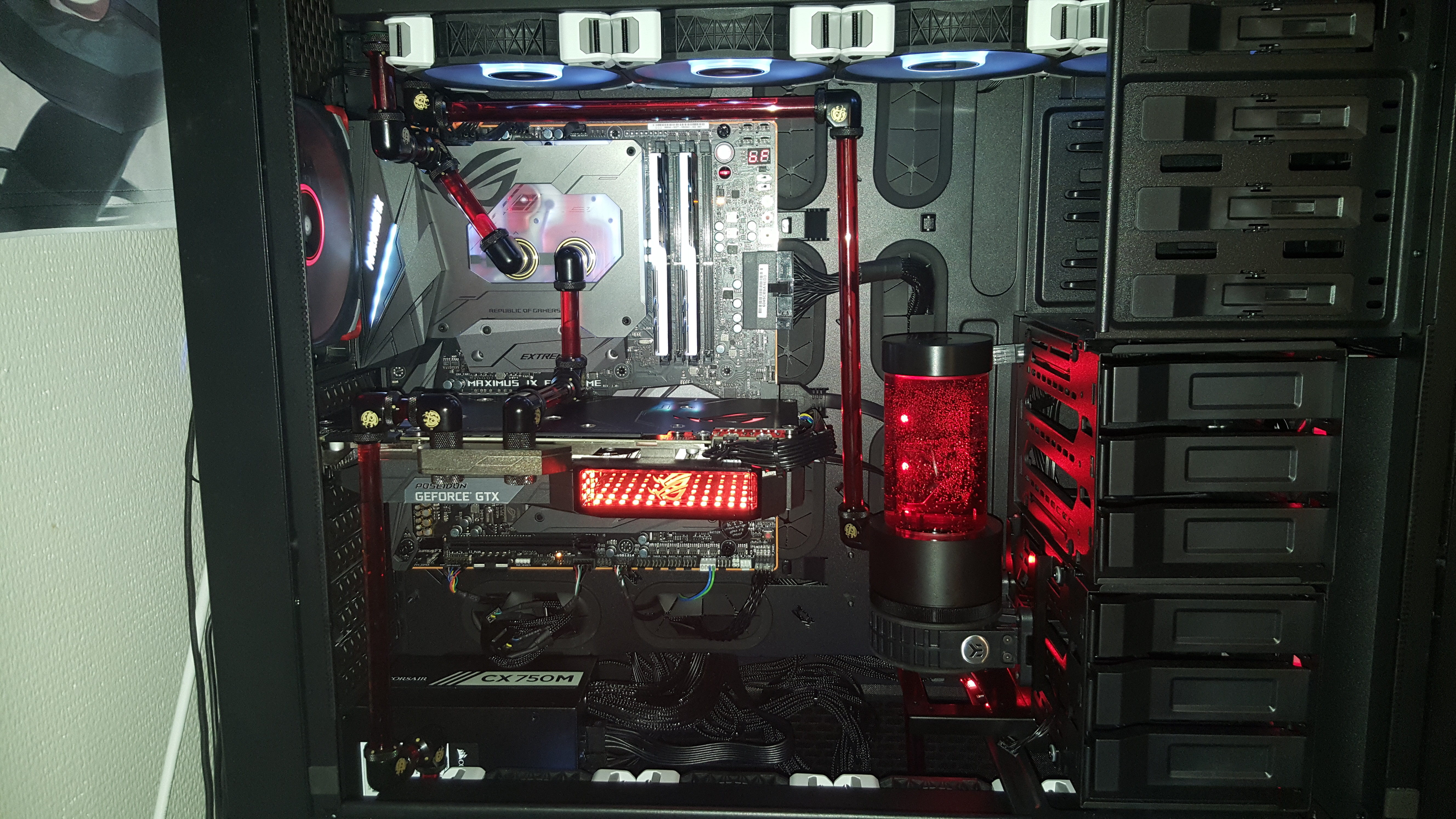 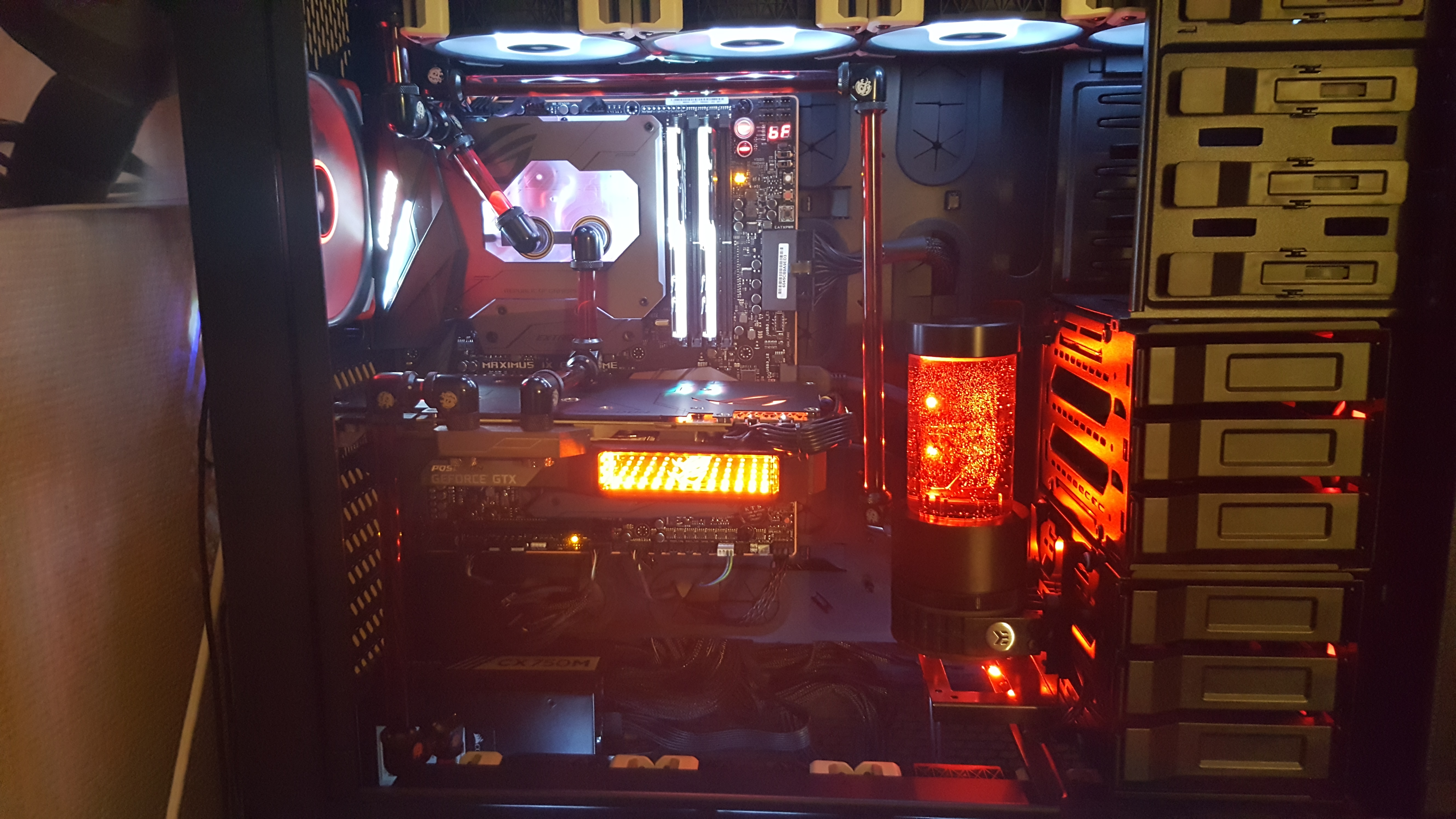 But in my opinion, I think the PC become a little overkill, there are more light inside the PC than what's on the monitor! Water cooling keeps the CPU and GPU between 26-38 degrees in games, depending on how fast all the fans goes. Makes incredibly loud sounds when I drive them at full speed! 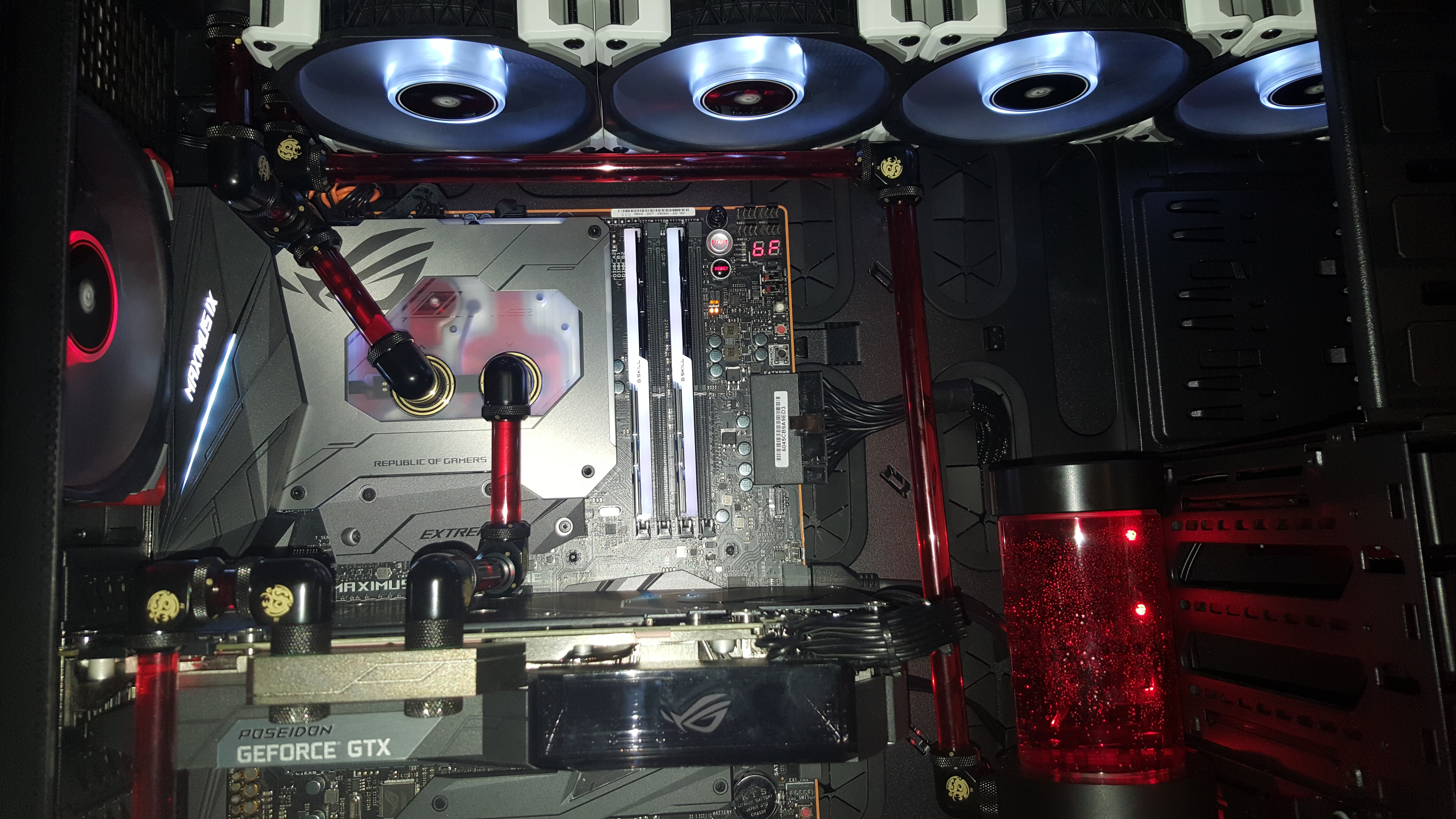 So now it's just to sit back and hope that all this waiting time was worth it. I'm unsure of which Mod I will test here on the website first, many new updates and releases that have come and ready to try out! 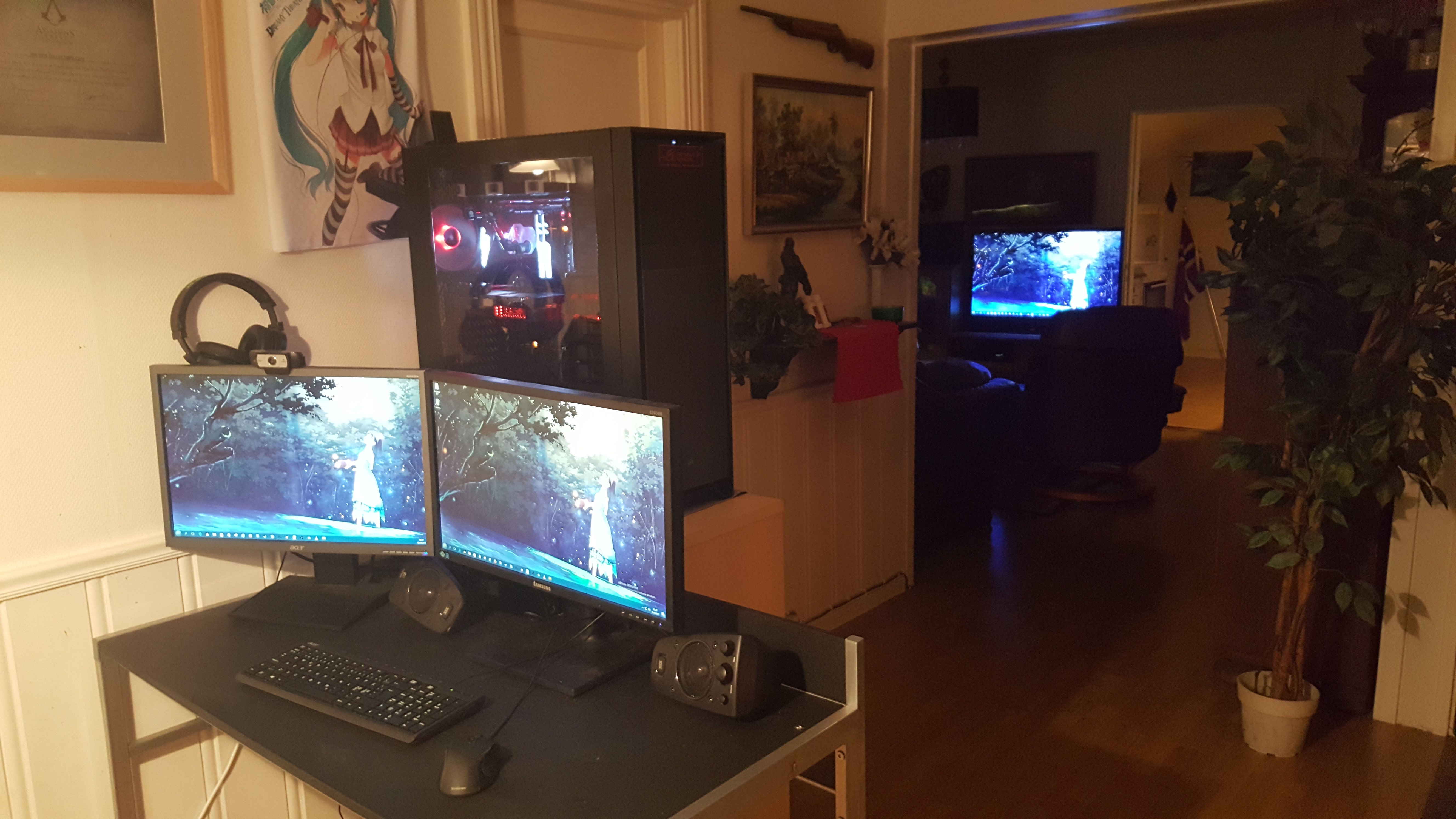 If I'm going to buy myself a new pc one day, I'm going to make sure to call you first! If you can't play minecraft on that monster pc, there most be a big problem somewhere! xD

P.S that last image, is that where you live? Looks great!

If you need help with PC, you can just send me a PM here.
And you like my place, thank you ^^

We missed you buddy!

I appreciate you saying that, it means a lot ^^

Everyone would have liked that, but I do wondering what type of great anime game would have been good to play on this PC? I.imgur.com

tales of berseria? thats the only high end example io can think of

All good here now, it's great to be back!

Very impressive. Bought a new PC more than a few months ago too, and built it myself, the first time ever (all others were built by the guys from the shop). Nothing that flashy though, just regular cooling, 32GB DDR3 RAM, i7-4790K, GeForce GTX 970... it has already been antiquated, more or less, lol.

You can play many incredibly good games on that PC of yours for a very long time. Only reason why I bought everything new was because the video card and CPU were incredibly hot when I bought the first part " Moddb.com " But this new PC had more light than expected xD

Jesus Christ man! That monster better be able to run some mods properly for all the waiting you (we) had to endure XD

the GTX1080 should easily run at least 99% of modern games/mods at max graphics.
The issue these days is mainly the processor. Since many popular mods are for 32bit games, they tend to rely on strong processing to run it all smoothly at max stuff.
Testing this is easy with games such as Total War Attila or Rome II with some of the high end mods outs there (like 1212, seven kingdoms, DeI,..etc).
If you really want to test your limits, I suggest Rome II with DeI mod; all settings on Max, custom battle with large armies (20 units each), in a walled city. If that doesn't kill your FPS, I don't know what will :P

I've tested out total war games and it doesn't matter anyway when I get higher than 12000 soldiers in the game it will start to lag, but it's because of the game. The game can't give more than that without start to lag, no matter how good or bad PC you have ;_;

But the quality is incredibly beautiful and nice, as long as I stay under the game limit.

Perfect timing, I will just try to put together a Ryzen build today. Have fun with the new toy!

Many thanks INtense! it's good to be back :)

Hore carp, THAT is an overkill build. It's only missing this guy on top I.ytimg.com
But seriously now, nice stuff.

I know it makes no difference at this point, but why not a Ryzen 7 1800X? While the i7 7700K has better single thread performance, it's not like 1800X wasn't gonna be enough to run anything at maxed settings. Get twice the cores while on it.

Also before I forget: Good to see you back Kark, you're sure making a grand return. My respect goes to you on having the patience to build something THAT good-looking, you even neatly tied cables that aren't directly visible :O

The only reason why I'm using i7 7700K is because I bought the CPU at the same time with everything else " Moddb.com ". I could send back the video card, ram, cabinet and the motherboard. However, I could not return the CPU because it is not possible to recover money after it has been used. But still after what I seen so do i7 7700 give better performance than Ryzen 7 1800X " Youtube.com "

I've been working a lot when it comes to PC and this is the first time I've been working on water cooling. It was much easier than expected, the only thing I had trouble with when I built this PC was the motherboard. Never worked with a motherboard that should have a water block on the CPU that big or heavy before. That motherboard weighs a little more than 4 kilos O_o Cables should always be sorted and laid out ;)

I had plans to add blocks to hide under the section, but for a strange reason, I liked it to be open that I can see what I've been working on. It's great to be back here again, just sorry that it took so long.