Post news RSS How not to attack an enemy Stronghold

Description of a failed attack against an enemy stronghold.

The enemy has a very well protected asteroid field. This asteroid field is a major problem to our interests; it has a long range cannon installed in it, and it's bombarding our mining facilities at regular
intervals. Adding to it, the Alliance also has a BattleStation close by, and everything‘s protected by a powerful shield generator. These structures are also protected by heavy turrets inside the shield itself, which means that any ships that try to attack this position will be completely exposed to the fire of the heavy turrets without any chance to fight back, as their shots will be stopped by the shield.

The Alliance doesn't have many ships stationed in there; they probably think they won't need them.
So we decided to gather a strong fleet, and try to destroy this Alliance position.
We gathered a fleet of 4 battleships, 4 cruisers, 11 destroyers and 10 Frigates and ordered it to jump out of hyperspace near the asteroid field. 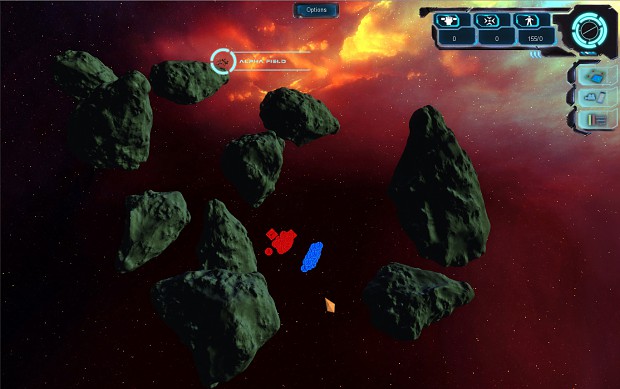 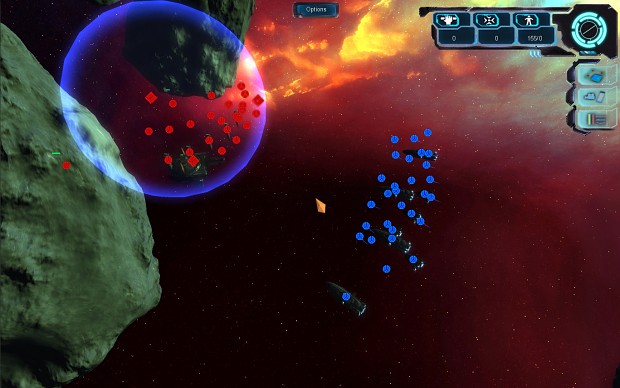 These kinds of shields are very strong, but our battleships have a lot of firepower - they should be able to disable it if they have the chance to concentrate their fire into it. But the Alliance commander will surely move his ships against our fleet to prevent that from happening. 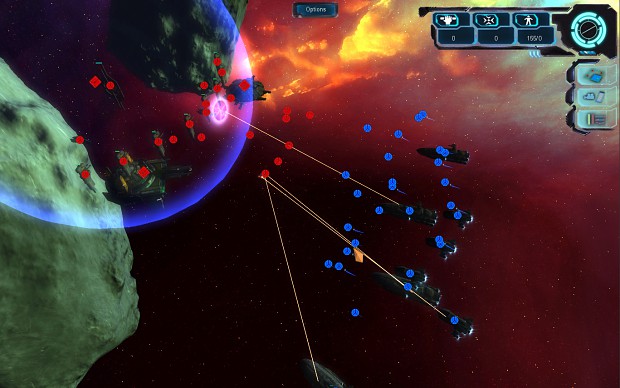 Some of our ships' long range weapons started firing against the Alliance frigates that are coming out of the shield. We can see one cruiser hitting the massive shield, and its shot being stopped by it. 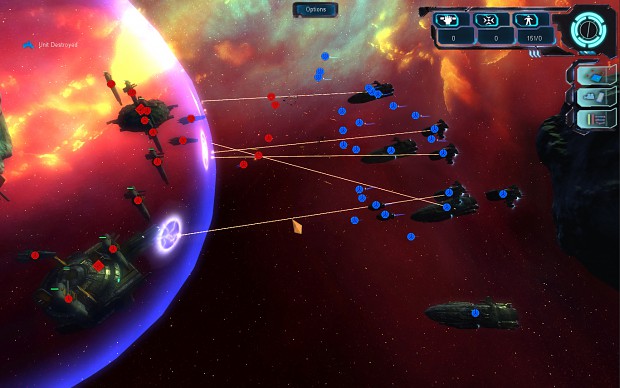 The Alliance frigates are no match against our fleet's firepower, and some of them are already exploding in pieces. In the meantime, the shield is now in range of some of our ships. 2 battleships and 3 cruisers start to attack the shield. 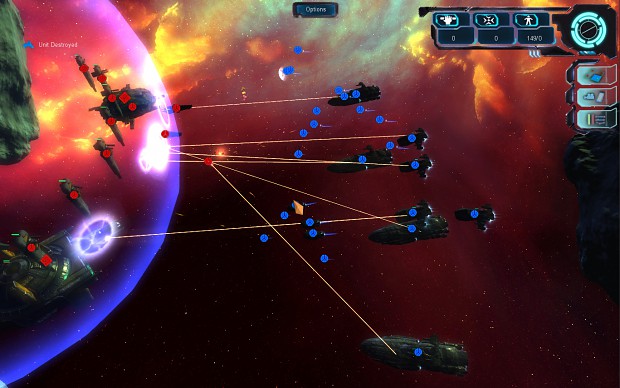 We just finished the last frigates, and now we're hitting the shield. 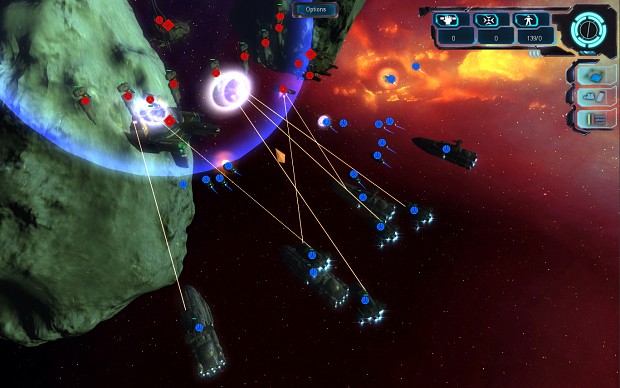 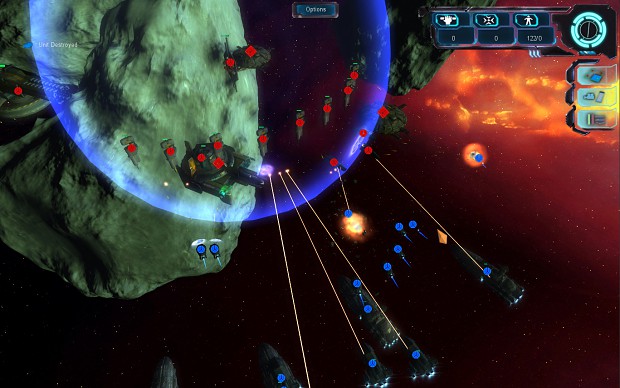 Our ships keep hitting the shields, and the enemy tries to prevent this, by sending their cruisers against our ships. Two of our destroyers just exploded. 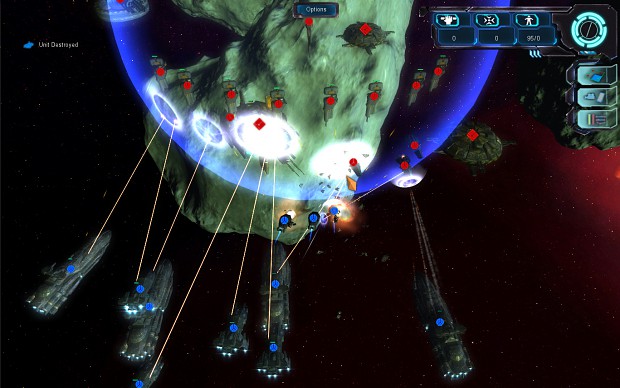 Although the cruisers are inflicting some damage to our ships - another of our destroyers is exploding - our ships keep concentrating their fire on the shields, and hopefully it will soon be down. One of our batteships is engaging an enemy cruiser with missiles. 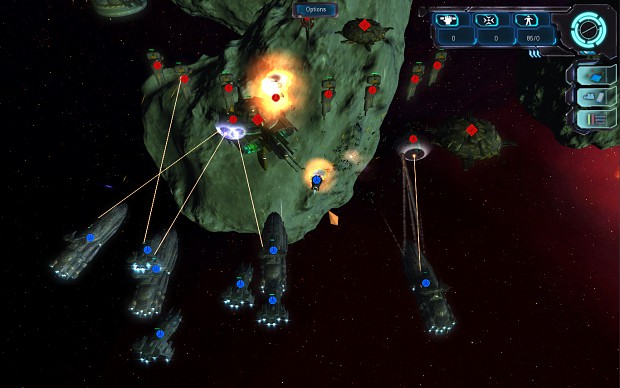 The shield is finally down - our ships can now get closer. The Battlestation has its own shields though, and there are still some enemy cruisers in there, and a lot of heavy turrets.
Let’s see if we have enough firepower to win this battle. 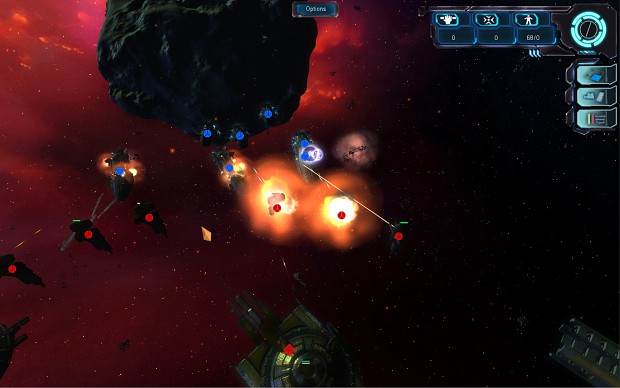 We are now taking heavy losses; one battleship and one cruiser are gone, although we just finished 2 enemy heavy turrets. There are no more screenshots from this point forward, but we did lose this engagement.

We were able to destroy the enemy Battlestation, but ended up losing all our ships in the process, and the enemy shield generator was not destroyed, so soon enough his shield will be up again. This attack was a complete disaster.

So the plan was basically to charge forward and shoot like a maniac? Doesn't sound very tactical.

Ever hear of flanking...

Of course im speaking from my experience on EVE so this may not be fully correct. That and im kind of used to working with atleast 30 Capitol Ships and about 60 Destroyers.

Yeah I know, and flanking would work here, but really the idea here is showing a failed attack, not a sucessefull one :P