After many years of speculation it's finally an official link between the games. 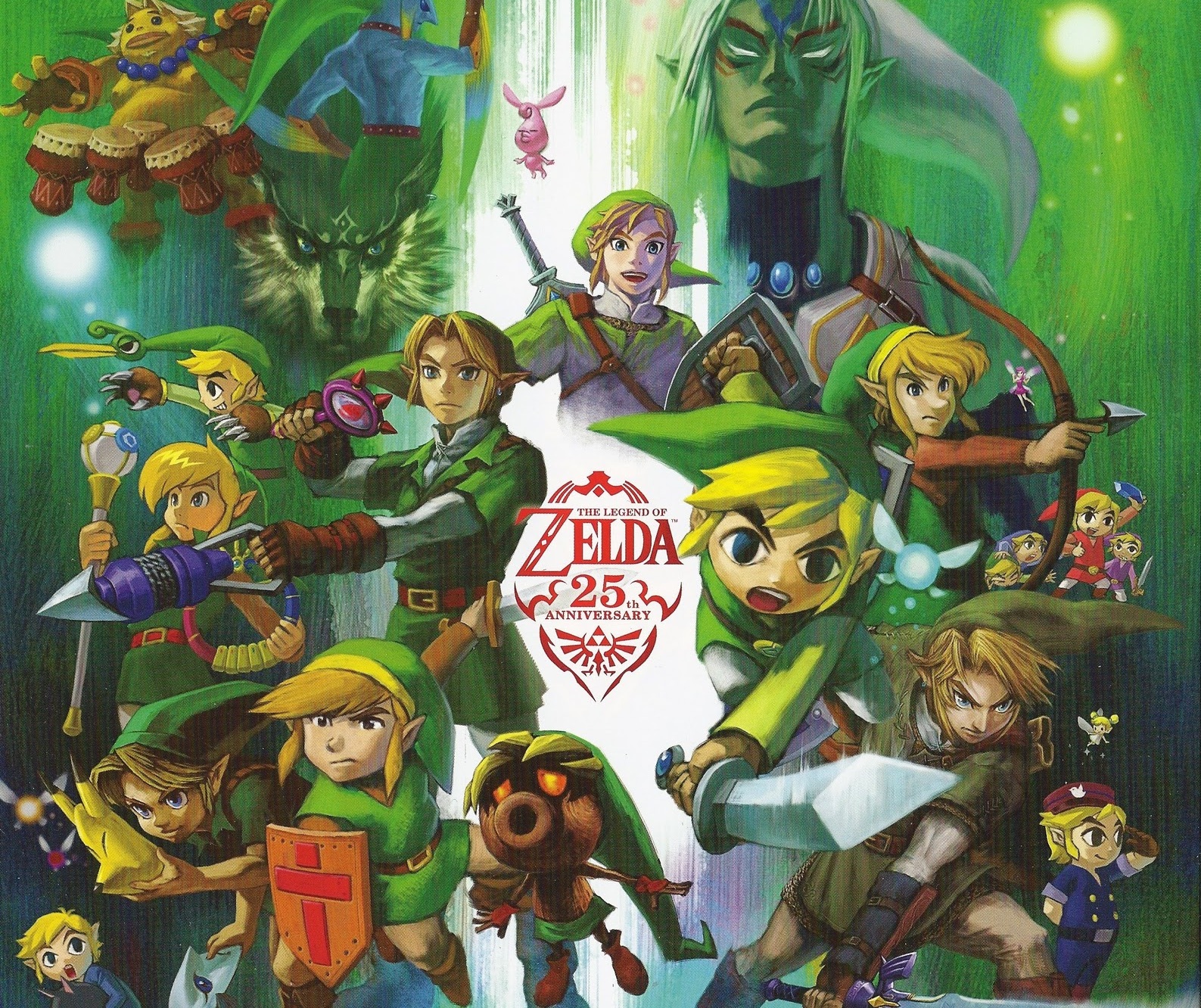 How does all hanging together?

After many years of speculation it's finally an official link between the games. 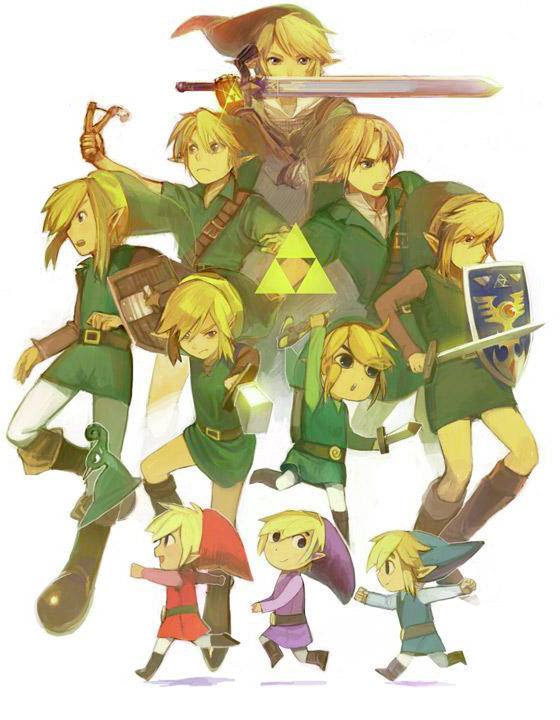 Zelda series is one of the most successful franchises in the gaming industry ever. Over 52 million copies have been sold, and there are 20 different adventure with Link in the lead role. There are few who have had one or two experiences with the verdant adventurer in her efforts to save the princess Zelda and stop Ganon. For many their eyes are linked, in line with Mario, synonymous with video games.

Nevertheless, it is a mystery that has plagued Zelda fans since the third game came out. Namely, how all the games are related. Some have accepted that every game is a unique adventure that has no relation to each other, while others have investigated and checked all the games to see a connection to how it all fits together. Many theories emerged online, where they were eagerly shared and picked apart.

In 2001, Nintendo of America issued out a separate timeline that explained all the games until then. This was picked apart by fans in both Japan and the West as pointed out major chronological errors, and finally had to Miyamoto and developers in Japan come out and point out that the timeline was wrong. The official reason was that Nintendo wanted players themselves should fill the back story and choose how things hang together. This of course does not stop the fans who continued with their theories and speculations.

Then came the 25th anniversary of the series, and then the first-ever series creator Shigeru Miyamoto speak out and released something on every forum and zelda fan pages on fire. Before we go game by what it was that made Zelda fans excited, do some research on the person who made Zelda

{One curious child inspires the world} 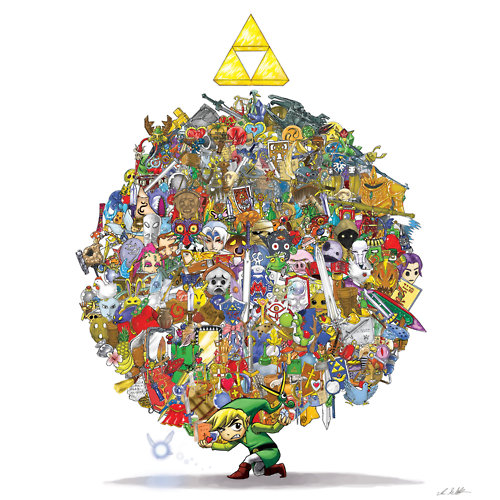 If there is a person who defines Nintendo, it's Shigeru Miyamoto. Born in the Japanese town of Sonobe, he was the eighties perhaps the biggest reason why the video game industry did not go under. His merits include the first Mario games, Donkey Kong, Star Fox and especially Pikmin. Nevertheless, the Zelda series that most people remember him for. As a child he lived with his family and near the extensive forests, and he was very keen to explore nature. One day he discovered a lake, than another day he found a cave, and so it continued. Being able to go out in the woods and discovering new things inspired over 30 years later when he started the Zelda series.

From a young age Miyamoto knew that he would work with culture and entertainment, and he was enrolled in a local art school. When he was finished in 1978 he entered the gaming industry, having been hooked on the game Space Invaders. At this time was money in the arcade machines and Miyamoto was tasked to create a game that was based on the old atari technology. Having been inspired by both New York and King King he created a story with a princess, monkey and a carpenter, which he later brought to a plumber. Success was not long in itself and rolled coins into arcade machines.

Yet it was not Miyamoto satisfied. Although he appreciated the Nintendo he did not play the way by using coins to spiille a game in minutes before you had to start again. He would create bigger games where you could let the player take time to examine nooks and corners before continuing with the story. When Nintendo announced its first console finally got the opportunity.

After 6 years great success with Donkey Kong he got free rein to create a game of your choice. HEFR he started to go back on their childhood memories and the joy of being able to walk around in unknown terrain and finding secrets. As development progressed, he needed a name for the game. After hearing about the American writer F.Scott Fitzgerald (The Great Gatsby) and his wife Zelda, he discovered that enjoyed the latter's name, and renamed the game "The Legend of Zelda". 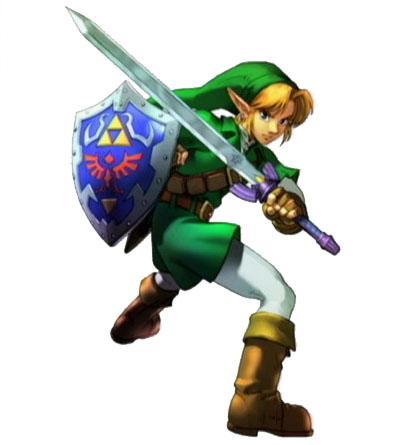 As previously mentioned, 2011 was an important year for Zelda. The series celebrated 25 years and it had to be celebrated. The December 21 this year, the book Hyrule Historia released in Japan. A 250-page tribute to the series, which featured little stories, skits and other things not seen in the series before. The main thing in this book was still a single map on page 125 in the book. This was in fact nothing other than the official timeline that explained how all the games until Skyward Sword hung together. Fans went crazy, it was still a problem, there existed only in Japanese.

At first glance it did not seem like a big problem. Fans translator constantly material from their favorite series into English, so English-speaking devotees also participate in such debates and the enjoyment of the information. In this case it was difficult, since many of the words could have different meanings, and because Nintendo did not confirm anything. Yet after a year and a half has come to an konsenus, since an English edition was launched. Note that mild spoilers may occur.

The beginning is easy, and there is a unanimous agreement that the first four Zelda games are from earliest to latest are:

Here is where things start to get complicated. For those who have played Ocarina of Time knows that story is largely about the time and place. The series' followers had already come to an agreement that may exist parallel timelines that everything was going to hang together, but what was surprising was that there were actually three different timelines. So what was it that made these different timelines? The outcome of Ocarina of Time.

To understand this a little better, one must know a little more about the history of the ocarina. In the game you travel Reprocess time, and you can toggle on being a young or old Link. This would also impact on the story. So if you now still hangs with I will summarize the three different scenarios leading to the timelines.

The first timeline is based on the fact that Link loses the battle against Ganon and the three pieces of the Triforce disappear into the world again. This was surprising since the game never hinted a story further beyond than to defeat Ganon. If this result occurs following games in chronological order:

A: A Link to the Past
A: Oracle of Seasons
A: Link's Awakening
A: The Legend of Zelda
A: The Adventure of Link.

The second timeline was more easy to understand. It follows the theory that after Link defeats Ganon is sent back to relive his childhood that he lost halfway through the game. This was a simpler time line to follow since the next game Majoras Mask was a direct sequel which was based on the same characters as in Ocarina. It meant that these games took place this timeline

B: Majoras Mask
B: Twillight Princess
B: Four Swords Adventures

The last time the line was based also on that defeated Ganon but unlike the other timeline, select Link here to continue his life without going back to being kids. The difference here is that Ganondorf survives and takes revenge by flood Hyrule. 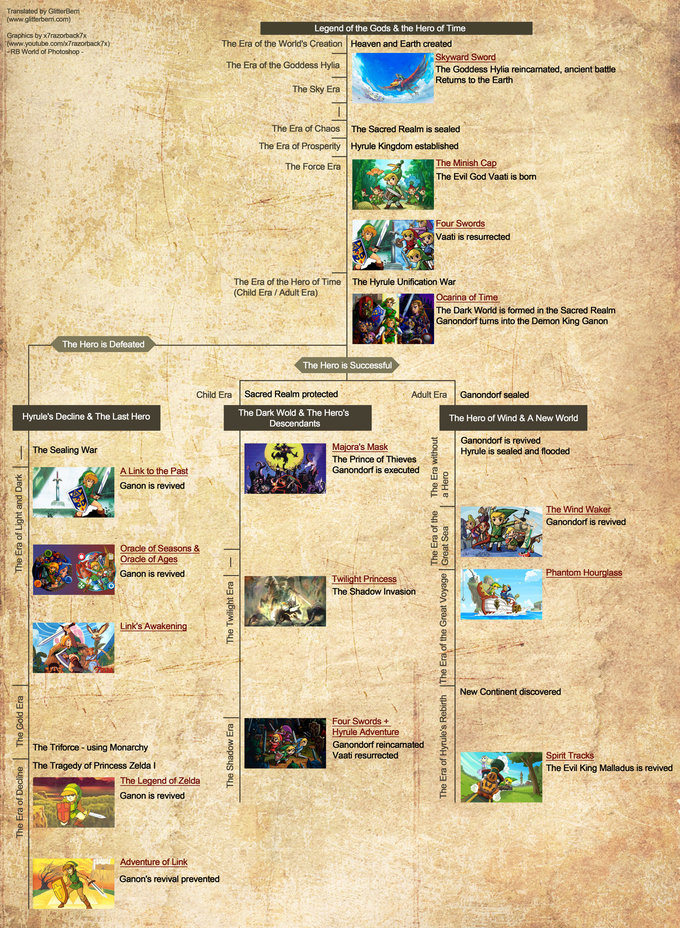 So what got you up to? The fact that such an important part of the Zelda mythology was only exclusive to the Japanese fans was something that many fell heavily in the chest. A facebook campaign was started where Nintendo was asked to publish an English translation of Hyrule Historia. The January 29, 2013 came the book in English, not Japanese fans could finally confirm what Japanese fans knew for over a year. Still, not everyone is happy.

Some thought that some of the mystique of the series was gone, while others felt that there was no evidence that this was the official way to chronological rank games on. Many also claimed that Miyamoto used Link and Zelda that generated characters to develop fun games. This can be justified considering that there is not much information in the game to suggest that everything was planned from the beginning.

Love me some Zelda games. =)

Still can't get over the fact that Link looks like a pretty nice girl on some pictures .___.

you are a genius for adding the music :P

Good news, good pictures, good music, exactly what I was expecting of Kark-Jocke.
Many thanks for the great news! :D

I don't know where the music is coming from. But it is perfect

Zelda games are number one for me, of all the nintendo games :)

Thank you so much this is fantastic!!! :D

hm the only Zelda games if played was in order Link's Awakening,
Oracle of Seasons and Ages,Minish Cap on real GBA.
On Emulators Link to the Past and Ocarina of Time.
I like Ocarina of Time it is one of the best Zelda games.

I feel like my childhood is coming back to me again, thanks for this :)

Thank You For The Nostalgia

awesome read, it was almost as if the music knew what part i was reading and played different songs at that moment, im just wondering... are these songs from the 25th anniversary orchestra CD? if not, where can i download them :o

Please guys, where can i get the music in playback ?

The Legend Of Zelda - MEDLEY - Piano Violin
Link here for the music: Youtube.com

The Legend of Zelda: Ocarina of Time Adventure
Related Groups