Holdfast: Nations At War released on Steam! Check out our development roadmap.

Posted by AnvilGameStudios on Sep 27th, 2017

Holdfast: Nations At War has been released on Early Access! Have a look at what's to come. The development roadmap details a list of new features and improvements upon existing ones that you’ll be seeing get into the game.

Early Access will be used for its intended purpose; allowing the community to become directly involved in the development of the game and helping to fund further development.

Holdfast: Nations At War is still under active development (and will be for some time).

This Alpha state means that some features and content are not in their final form. Improvements are ongoing for the core mechanics of the game such as the melee and naval combat along with player count optimisations. On top of this base we also planning on the inclusion of new features such as cavalry, new factions and maps.

These features have been the most-requested additions to the game in our draw-down period. We hope that this shows that we are listening to you and mapping development accordingly!

You can view the development roadmap here. 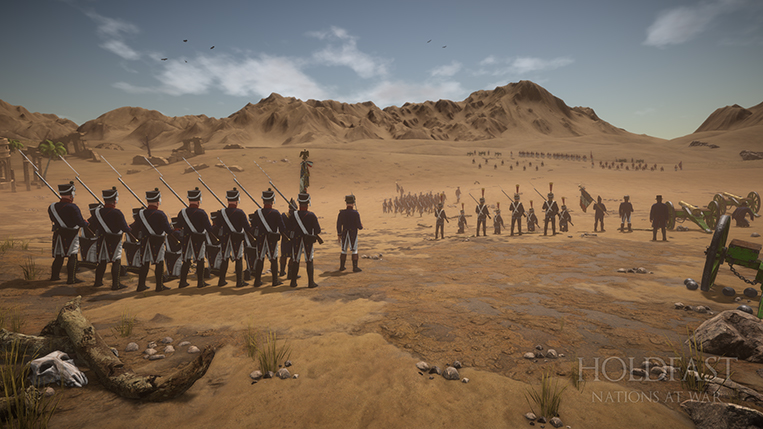 The bulk of the game, playwise, content and availability is exceedingly adequate for an early release and promises to overshadow many if not all similar platforms. but I have to say for myself and globally to general view is ,melee is awkward, hard to use and a disappointing aspect to what is a great game.
the naval combat is a huge experience. more so than land battles.
the land combat is currently like CSGO set in 1805..
But that will change. my own regiment, 65y Moskovskiy Polk, in Mount and blade plan to form, in line of battle.
as a life long student of the Napoleonic era I could poke holes in the uniforms, ships detail and armaments, but I won't...because its a great game. nitpicking purists don't play it .and shouldn't. if you ever depict a national uniform incorrectly I may make some comment. in closing I will only ask this. Get the melee working for bayonets especially and you will be the gods of 3rd person combat gaming.
ps.
on our wishlist: cavalry, deployable artillery, engineers,
general officers. adjustable character features, per gender,faces.etc.
if you ever want anything research wise,, I'm your man, I live for it.
"casques en tete, partez!, mais partez donc!"
if you cant mail me.-
I'm in game,,Saltpetre. most days, on land and sea.

pps. target indicators on ships at sea.. its hard to see flags at a distance.. possible ?

Thanks for the feedback guys! We're working on it.

@kriegsmann Yup, that is indeed possible to do.