Here is a dev update for levels 3 and 4 in Hell (1st world) in Party of Sin. We are looking for feedback, so drop us a line to share you thoughts with us.

Hey All, this update comes a little bit late, since everyone was busy last week. We got some feedback on our question last week (regarding episodic release). We decided to forget about episodic release for now, because as Liz said “it will make us douchebags”. Party of Sin is lining up to be a 6-8 hour adventure that you can play with friends, and we’re comfortable with that.

We had some really good progress on three fronts this week. First, Hell3 is very close to completion. Liz has been pulling it together and finishing off the modelling and lighting. Paul is helping out there as well. Vince (game designer) and I crunched to finish our second gameplay iteration of Hell4. I began working on the Hell4 boss, implementing his behaviour. I’d also like to mention a recent addition to the team. His name is Andy, and he is working closely with Blake on our sound design.

Andy has a programming background and is taking charge of XACT, our sound editing tool. Hell3 is nearly complete. Liz told me it would be done by next Sunday. Once that is done the artists will move on to Hell4. Here are a few pics of Hell3 as it nears completition. This is a very action-packed level and one of our best so far. It takes places in a cave after the sins have escaped the first battle and features lots of enemies. Angels breach from the ceiling of the cave while deeper in the cave the sins encounter many demons. Vince and I still need to do a collision-pass on it once the artists are finished. 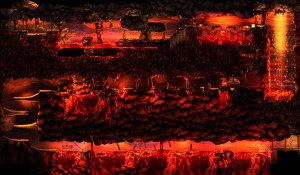 Paul made this giant render of the entire level (except for one last bit).

Vince completed the gameplay design of Hell4. This level has the sins riding a turtle through a lava stream. They meet the turtle in the final battle of Hell3. We want this level to be very action packed. It is our longest level, since the sins are always on the move. Vince added in falling boulders and clumps of ash which players can shoot to this level. Hell4 features a lot of destructible terrain. I got to work on a chase scene where angels riding other turtles chase the one the sins are riding. Here are a few development pics (ALL ART IS TEMPORARY). 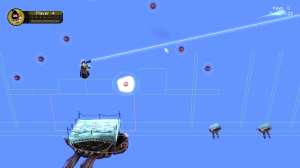 Bombs falling from the sky. Turtle moving along. 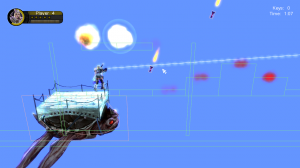 Mortars also make an appearance. these are launched by angels. 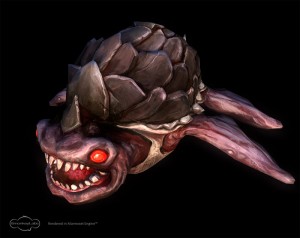 Closeup of our vehicle.

We got some feedback from the team on Hell4 and it is our hardest level yet. There is a LOT going on, we might need to tone it down a little bit. It’s a really fun level though, personally I’m impressed with the stuff Vince is cooking up. We still need to add enemies to it this week, then we’ll unleash it on testers. That’s all the progress this week. Stay posted for next week’s update! I’m also going to be completing Part 2 of the “Move Your Body” series on animations in the next few days.

Woah. Really nice stuff on the hell level. Can't wait to see that in motion! =)

Long time since last update huh? And the models and the hell level are looking cool.

Yah, we've been really busy over the last couple of months, all good busy though so hold tight.

I will talk to Dan, but we will release an short video of the animated turtle in action.