Playing as an omnipotent Creator is a fascinating and complicated endeavor. Players have the freedom to watch over and influence their Nugget subjects, like a child studying a particularly adorable ant farm. They have the freedom to shower the Nuggets with blessings, or sadistically shake the metaphorical ant farm into oblivion. With such a wide array of options available to the player, we’ve been discussing a system of… accountability.

Playing as an omnipotent Creator is a fascinating and complicated endeavor. Players have the freedom to watch over and influence their Nugget subjects, like a child studying a particularly adorable ant farm. They have the freedom to shower the Nuggets with blessings, or sadistically shake the metaphorical ant farm into oblivion. With such a wide array of options available to the player, we’ve been discussing a system of… accountability. This is a God game after all, so we are bringing in a Faith system. Soon, Nuggets will respond appropriately to player actions - whether good or evil - and as Nuggets grow in Faith, players will grow in influence.

When the Player uses Creator Powers, they expend Creator Points. These Creator Points regenerate depending on the Faith of your population (the higher the Faith, the faster the points generate). There will be several ways for the player to raise the Faith of the population - the first of which is our new Prayer System.

We plan to add a new structure to the game The Prayer Enclave, where Nuggets go to pray. We will be treating their prayers as a kind of mini quest system. Players will be able to scroll through Nugget prayers, and choose to accept or reject them.

"Help little Jumby!
I took my eye off him for one second while he was playing in the woods, and he ran off with a pack of wolves! I just know they'll eat him up - but not if you find him and bring him back! If you save my little Jumby, I promise to have faith in you as long as I live!"

Objectives
Find Jumby and return him to his mother before the time runs out and he meets the unfortunate end of becoming a juicy Nugget steak.

Should the player accept, the prayer quest will become active and the player will receive a reward of Faith as a result of completing it. The player can also increase Faith by simply using Creator Powers within range of Nuggets.

But what happens if the player uses their power to set a Nugget on fire? Or throw a Nugget into space? This would certainly increase Faith, but it feels different than when powers are used in a more benevolent fashion.

“Dear Creator,
I come to you with a broken heart. My nemesis, Bobrigo, just married the love of my life! I cannot stand for this. Every time I see his smug little smile, I have to punch a rock painting of a puppy. It’s such an innocent-looking puppy, too. Please help me. If you punish him in some way, you will earn every bit of faith I can muster. You’ll show everyone that justice exists!”

“Dear Creator,
Tragedy has struck! An obnoxious boulder just rolled in out of nowhere and planted itself firmly in the middle of the farm. If it stays there, the village might starve! We haven’t mastered the art of working around problems yet. Some Nuggets are already drawing straws on who we’re going to eat first. The whole situation is worsened by the fact that a batch of Bloody Diarrhea fruit was ruined by that confounded thing. I was looking forward to those. Please help us out!”

Objectives
Get rid of the mysterious boulder.

With this in mind, we have added Fear & Love to the Faith system. Depending on a your actions, Faith will be fear-based or love-based. Prayer Quests will be labeled as good or evil (“Please let it rain on our crops!” or “Dismember my annoying Neighbour!”). Healing a sick Nugget will increase Love, killing a Nugget with a power will increase Fear, and so on. Fear and Love rise and fall independently of Faith, but they do have a profound effect on it.

Based on the current Faith, Nuggets will build monuments that will dynamically change based on the strength of their Faith in you. The higher their Faith, the bigger the monument will be. 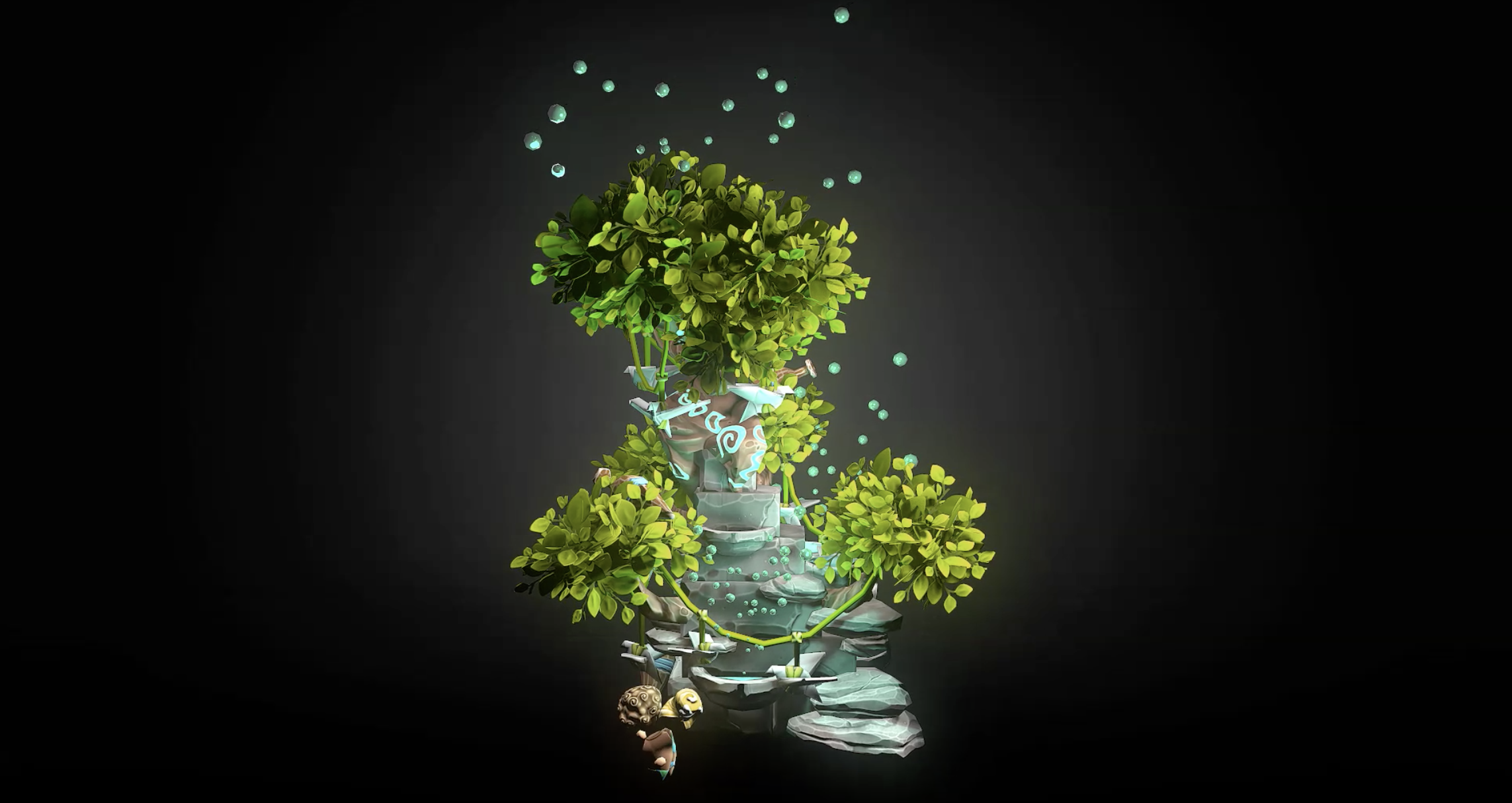 Nugget Faith is manifested in a way that mirrors the actions of their Creator. If the player has been causing mischief, faithful/fearful Nuggets will behave mischievously. If you have been a loving god, faithful/loving Nuggets will respond in kind. Everything has a give and take, though. While fear-based Faith can cause problems in the long run, it does generate Creator Points twice as fast as love-based Faith.

You can also choose to be a careless god and remain neutral. This way, Nuggets will continue their evolutionary journey with less interruptions from your side. 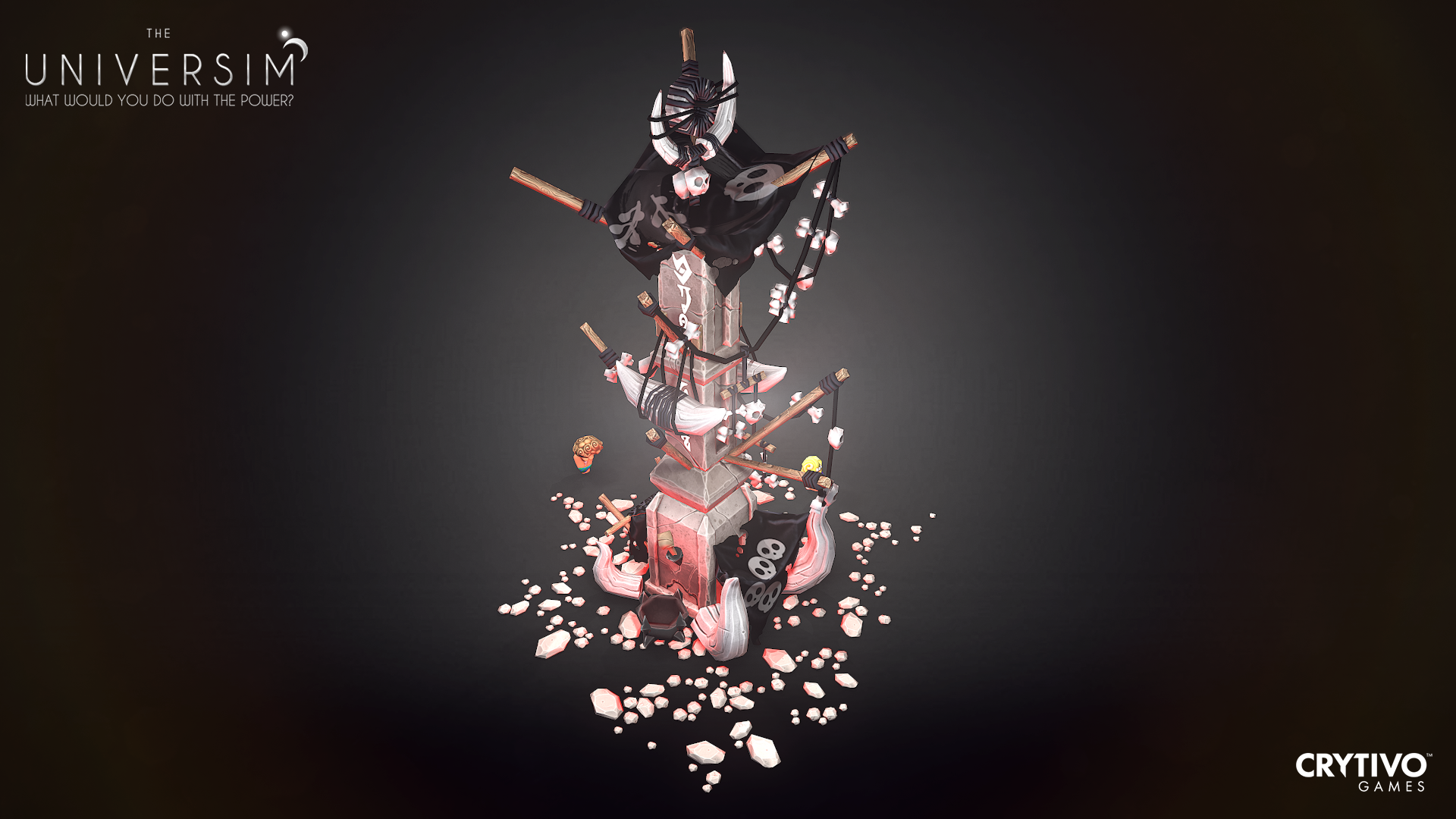 Faith in general has such a profound effect on Nuggets that it will even affect their genetic traits when they are born. Populations with high Faith will have a higher chance of introducing positive traits (such as “Grind - This Nugget loves to work. Their stamina decreases 25% slower.”) to their population. Adversely, low Faith populations will be more likely to foster negative traits - but remember, selective breeding is a thing. Once a trait has been introduced, Nugget infants have a high chance of inheriting the traits possessed by their parents. Each Parent introduces a 25% chance of character legacy. If both parents share the same trait, the chance grows to 50%. (Special thanks to our fan for inspiration: Hazonic)

Let’s dive into the specifics

Imagine listening to Nugget prayers every moment of every day. Nothing could be more tedious. That’s why you have the convenience of the Prayer Enclave at your disposal. Instead of parking yourself in front of a divine telephone, you can simply check your mail whenever you desire. Nugget prayers are displayed once you click on the Prayer Enclave. They are listed in order of appearance, but you can sort through them in numerous ways. Selecting a quest will display more information about it. 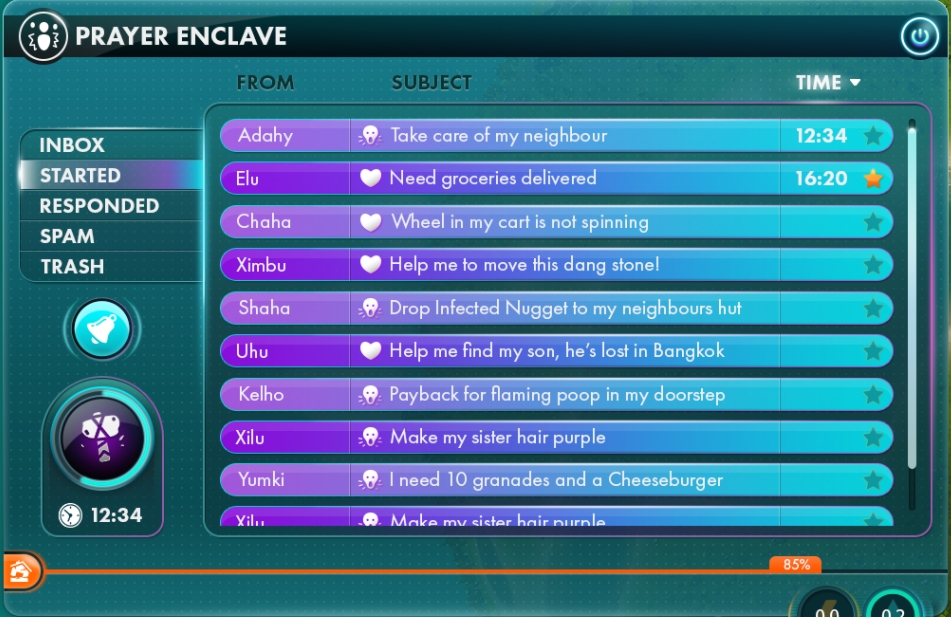 The Menu Hey, this looks familiar. Here’s how it works

Inbox - Contains the latest batch of prayers, straight from the mouths of Nuggets. It suddenly seems less appealing...
Started - Should you accept a Nugget’s quest, it will be moved to this tab.
Responded - Completed quests are found here.
Spam - There’s no telling what lurks in this tab. Be warned.
Trash - This is the home of rejected prayers. It could be that they went against everything you stand for, or maybe you just didn’t feel like doing them. You’re the boss. 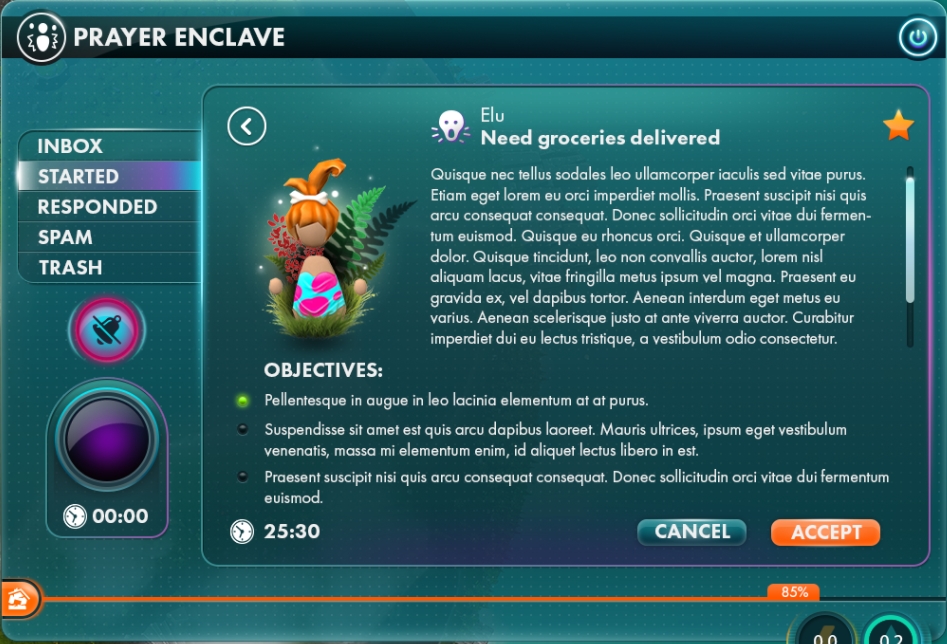 Once you’ve got an idea of what the quest entails, you can either accept or reject a prayer. Accepting a quest will make it active, which activates its timer if it has one. This means that certain quests will need to be completed with a bit of speed.

Don’t go accepting quests willy-nilly, though. Most of them have consequences. This is where the concept of good and evil comes in, which translates into love or fear from Nuggets. The heart and skull symbols in the Prayer Enclave indicate what each quest entails from a moral standpoint. You can probably figure out which is which. It will likely be difficult to always be good or bad, so sometimes you have to make a tough decision. This could mean missing out on a decent reward to stick to your chosen morality.

We hope you love the new system! Let us know what kind of god, you think you’re going to be and share your ideas about what type of side quests we should add to the game.

All the best,
The Crytivo Crew