2.1.2 introduces a variety of bugfixes and balancing changes, and adds hlw_washedaway to the Overrun game mode.

Here we are with another Half-Life 2: Wars beta update! This update mostly addresses a number of bugs and balancing issues, but also adds hlw_washedaway to the Overrun game mode. Washed Away is our newest map, added in 2.1.0, and you can see a few screenshots below: 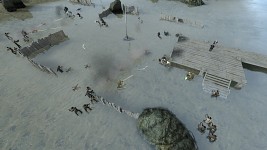 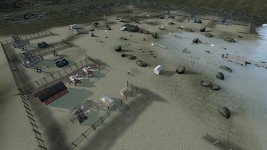 See the full changelog at the end of this post for more details on Beta 2.1.2. Click the button below to update Half-Life 2: Wars via Desura. Alternatively, you can download the full HL2: Wars Beta 2.1.2 beta files from Moddb in 7z archive format (extract to your Steam/SteamApps/SourceMods directory).

If you are having trouble downloading from Desura or Moddb use our mirror instead: click here to download 2.1.2. Let us know on our community forum if you are willing to help us out and host a mirror for our releases!

Fixed:
* Text might appear untranslated (e.g. chat text looks broken)
* Rebel HQ is at the start of the game in the preconstructed state animation when playing in a multiplayer game where the player is not the host
* Bonus crates are too frequently dropped at unreachable places
* Engineers/Stalkers incorrectly first placing further queued "place building" orders, while they should first construct the first placed buildings
* Attack Move (and several other abilities) does not function correctly when activated through the minimap
* Rebel Engineers are sometimes stuck at the Headquarters building when returning Salvage
* Incorrect cached length between connection of navigation areas after a split edit, performed by buildings. This causes problems with the path finding of units (choosing longer routes for example)
* Potential crash when unit is at the border of the fog of war grid

Game Lobby Fixes:
* Player avatars not shown
* Spectators not being shown in spectator list
* Fonts in gamelobby might look incorrect
* Text appearing in color combobox after making a color choice
* Game launch canceled when a player didn't picked a start spot yet (due the lobby automatically assigning a start position)