Gunslugs 2 enters the wrapping-up stage of development. A 6 month tour-de-force for 1 developer.. this week saw a new end-boss, and the final world being created

So this coming Tuesday (11th) marks the 6th month of development on Gunslugs 2.

At times it feels longer, so I'm actually surprised it has been "only" six. With Heroes of Loot I was at least on 8 months of full-time development, and seeing how big Gunslugs 2 has become it's not bad at all ! (yay procedural generation)

This week I've been wrapping up the end-boss for the Avalon world (world 6) and started work on the final world (world 7!) from which you can see some bits and pieces in the video above.

I obviously also had the release of the demo, which went pretty ok, sadly not a lot of coverage from press or websites but let's just stay confident that will work out eventually. This is mostly due to the busy november and december months where a LOT of games are being released and most of those games have marketing budgets bigger than what I make in a couple of years combined.. which is one of the reasons I'm delaying the game's official release until January 2015 (as previously announced). 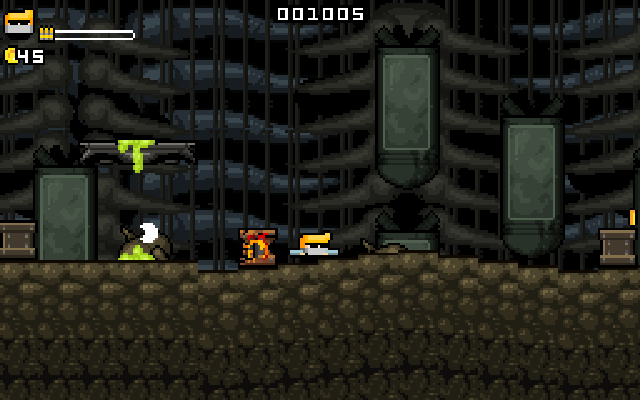 I expect to have the game completed, maybe, by the end of next week or the week after. Then I still need to do some testing, and of course the task of porting all the code over to the iPhone/iPad and then a HTML5 port for ChromeOS. So all that combined will still take me some weeks, and we all know how December flies by with all the holidays!

If all goes to plan, I have the game ready to go in early or mid December, including uploaded to app-stores and hopefully available for early review. It doesn't look like Greenlight will happen before then, so I'll at least have the pc/mac version sold in www.gunslugs.com using the Humble widget.

There will be a sort of early access thing happening this coming week, but I'll post more about that when it goes live ;)