I'm never really sure to what degree I'm "meant to" talk about the business and numbers side of making Airships. For example, I haven't released any sales figures. (They are a source of guarded optimism, but let's just say I'm not quitting my day job anytime soon.) Still, I'm going to go on a bit about Greenlight, the process through which one might get one's game into the Steam store. 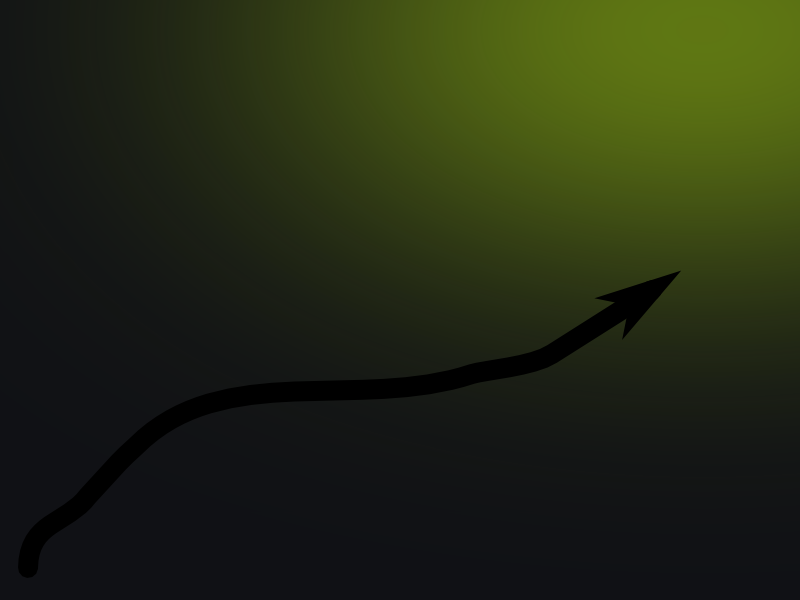 It's generally taken as a fact that Steam is by far the dominant distribution channel for indie PC games, with a big chunk of developers' sales going through it. As such, I am very keen to get Airships onto Steam, even if I am ambivalent about Greenlight itself.

I put the game up on Greenlight a month ago, and according to its stats page, it's so far gathered 57% of the votes needed for a chance at getting into Steam. This sounds pretty good, but note that nearly all of this progress was made in the first week. After the initial rush of people, a Greenlight page only gets a trickle of new visitors. Right now, I would guess I'm gaining 1-2 percent a week, which sees the game included in Steam in... about a year.

Obviously, this is not great. It's true that I'm in no big hurry to get onto Steam, as I expect the game will take another half year to complete at least, but who knows what will happen in all this time - Valve have stated that they would quite like to abolish Greenlight, so my progress may be meaningless.

The thing to do, then, is to get people to upvote the game more quickly! But how? I've written about it all over the place, tweeted about it, done a key giveaway - but all my efforts don't really register. I conclude it's about as easy to convince someone to just buy the game than it is to have them upvote it on Greenlight. 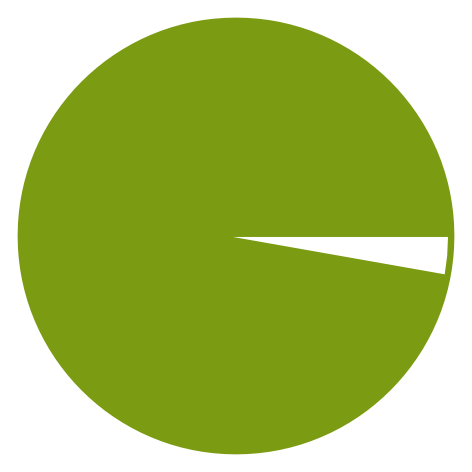 The white slice represents the proportion of votes coming from a key giveaway drive during the main four days it was visible. The rest is people coming across the game via the Steam website in the same time period.

So how does a game get greenlit? The "simple" way is to make a game that is universally appealing: about a third of people who visited Airships' Greenlight page upvoted it. If that rate was 100% it would already be in. Now I have more than three thousand upvotes, and more than a hundred comments that are very positive and excited about the game, so it's not that it's universally unappealing - but perhaps too niche, or too unpolished? There's a lot of second-guessing involved in this process, but all I can do is keep on putting up new, cooler things and hope that this improves the rate of upvotes.

Steam shows me a tantalizing little graph indicating my game's progress versus some anonymous other ones that are at some particular ranking. What worries me about this graph is that quite a lot of high-ranking games have a huge second rush in their graph, an influx of upvotes bigger than what they got when they were put in front of everyone who actively browses Greenlight. 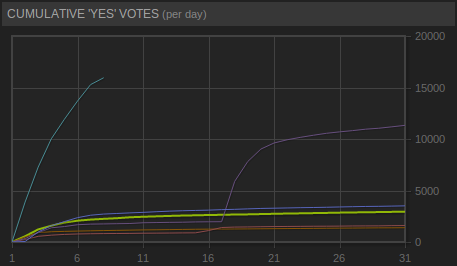 Note the big secondary boost of the purple line.

What causes this rush, and where can I get it? It's possible that hitting the right kind of media attention does it, but my real worry is that it's the result of a "upvote the game and get a free copy" deal.

There's quite a lot of those now, and I'm not very happy about it. If the purpose of Greenlight is to gauge consumer interest, then bribing people with game copies both skews the result and actually depletes the market for the game. And Greenlight is a race: Airships is competing against all the other games in Greenlight, some of which enjoy the advantage of these kinds of deals.

So what can I do? I could sign up for one of these things too. Maybe I could give away three thousand copies of the game for three thousand Greenlight votes, which would be far more games given away than have been sold so far. But what message would that send to the people who had the enthusiasm and trust to actually buy it? If only they'd waited for a bit, they could have picked it up for free!

I don't really want to get fixated on Greenlight. I have a game to develop - and sell, through itch.io, Desura, and IndieGameStand.

I can continue asking existing players to upvote the game, and I can try out a bunch of things to improve the attractiveness of the Greenlight page to random visitors. And I'll keep a lookout for ways to promote Greenlight voting that don't feel like a slap in the face of the people who are supporting and playing the game right now.


In conclusion, if you have a Steam account, please take the time to upvote Airships. It would mean a lot to me, and will hasten the day where I don't have to twitchily reload the stats page, hoping for single-percent increases.

Next up: getting started with boarding combat, in-depth.

Thank you, it is highly appreciated! :D

For what it's worth, I feel the same way about "buying" votes by giving away tons of copies - it just devalues your game overall and a slap in the face for supporters.

I would love to buy that game right now... but I don't have a bank account with online banking capabilities. My only option for buying this AWESOME title would be steam. I already upvoted as soon as I found it on there.