Greedy Bankers has been submitted to the App Store and will be available by the end of the month!

I did it! It's been quite an adventure, and as I always say to myself, this is only the beginning! Greedy Bankers has just been submitted to the App Store and is awaiting approval. I expect to release the game before 28th Feb. 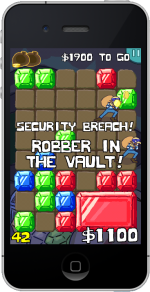 So how does it look? Well, Greedy Bankers has changed a lot since last time you saw it, and is far more feature-rich than it was before. I fully designed the Banker characters, and am very happy with how they turned out in the end. To the right is a screenshot of the game in action, and more can be seen from the Greedy Bankers website.

I am very excited to see how the game does. Though I have been an indie developer for many years now, this is my first commercial release, which makes it a big landmark for me. But there is more to come! I have just started work on the iPad version, which will have even more game modes to make full use of the large tablet screen, including local multiplayer. The adventure has only just begun!

In the coming week I will post some more details on the game, how it has evolved, and the challenges I have faced re-developing the game for a new platform. Watch this space!