Post news RSS Graphical style: The use of Styleguides and Stylesheets

Our 2D Artist talks about the usage of Style Sheets and how she worked with these when making the Art Style for Medusa's Labyritnh.

During pre-production of a game there are numerous things that needs to be done in a very short span of time, one of those things is deciding an art style for the game. For this devblog I will be showing you some example of Styleguides, how they can be used during production and a quick overview of the process of working out a specific art style.

Whenstarting up a new project putting together a cohesive look is one of the biggerchallenges for the artists, and even if you decide to simply go for photo texturesand realism as a style, there are many things to take into consideration. Realismin games can still be customized through post effects, such as Battlefields washed out colors and coldblue overlay. This post effect might seem simple, but it works well with thegenre of the game, as well as making the game look more unique. In a business
where many games compete for the same market, with gameplay closely resembling other popular products, the need to stand out in a crowd is essential. If a gamer can pick out your game just by a quick glance on a screenshot you´redoing it right! 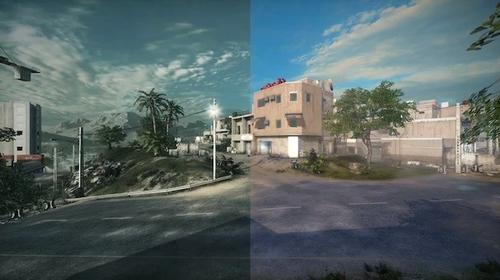 A Stylesheet, or style guide, is a document describing the graphical style in general of the game, but can also be excessively detailed and exhibit individual props contributing to the overall look. There are countless advantages of having a well put together Stylesheet, presenting the whole team with a
visual tool what to strive for, to enhance the common vision of the final product and highlight possible problems in an early state of production. An example of an impeccable Stylesheet is the content put together for the game Ryse: son of Rome (which can be found here: Conceptartworld.com. In the picture below a scene from the game has been broken down into a number of concepts and reference pictures, with shorter texts describing the scene taking place in the game, as well as the specific color palette and visual elements to use.

The hardest, and at the same time easiest, part of putting together your Styleguide is the fact that there is no specific template to follow. In a team working close together where communication is no issue the Styleguide might consist of more art rather than text, and more of the “final” look of things, leaving out the descriptions of what brushes/patterns to use. To keep it simple, the Styleguide can look however you want it to, as long as it´s easy to review and follow by your team members.

For Medusas Labyrinth we are currently working on putting together the graphical style and Styleguide as we speak. Most horror games rely heavily on realism and photo textures, one of the arguments being that the realistic style enhances the immersion of the game experience, and therefore intensifying the experience, making the player feel more in actual danger than they really are. At our first draft of the game we didn´t do that much research before deciding on the style, everybody were too eager to get to work so it all just happened and developed as we kept going. As for this time, I´ve decided to actually play around with textures and ideas before actually making the final decision. Even if cartoony or cell shading might not be a good choice I want to at least try
something more interesting than just use photo textures. As a part of the artist team I feel like this is a great opportunity to try and make something new, even though the mere setting of Medusas Labyrinth makes it stand out from the rest, with ancient Greece almost exclusively used for action/adventure or strategy games, and the fact that the number of artists limits how far we can
take the texturing artistically, since more than just one or two people needs to be able to finish assets with the same quality.

So, a quick overview of what we got so far. We made a small 3D-scene, an underground altar with some pottery and chains, which we try different elements on. The main inspirations so far have been from the art of ancient Greece vases, painted marble statues and the Minoan temple of Knossos. 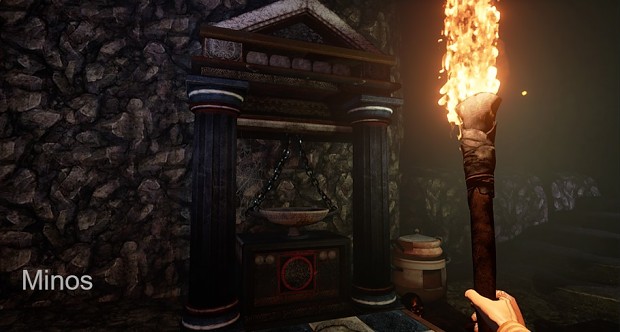 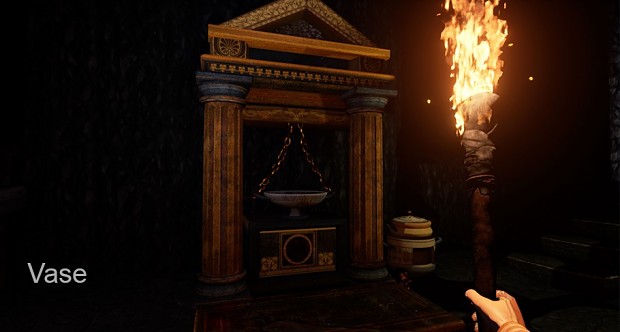 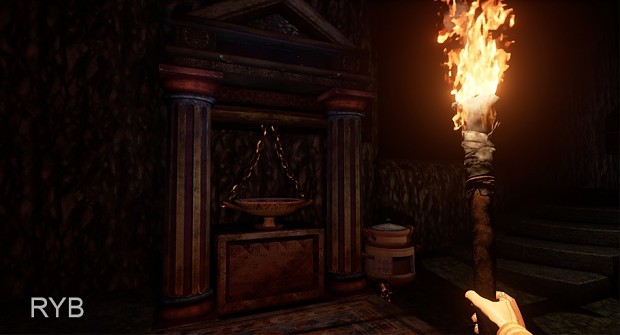 That's it for this Dev Blog! We're still early into our new Preproduction phase so if you've got any feedback, we'll be glad to discuss it!

The best combination: wall texture from Minos + the portal from Ryb.

BTW Art from Ryse is great. Hopefully Medusa will have some nice too. :)

Thank you for the feedback! (:

Yes, Ryze has some really nice concept art and the setting is kind of close to ours so it's a great inspiration source for us during the preproduction phase. (:

You are welcome.
Ryse - yes, its good inspiration. But dont use roman soldiers as strong inspiration for some greek soldiers. :)

Also dont use common wooden barrels (similar to barrels in Amnesia). I think I noticed some of them in a video. Its not correct. Different kind of big pottery and (willow) baskets were used for storage purposes in ancient times. The game needs similar details to look more plausible and original - not as "another clone of Amnesia and Outlast".

Medusa could be something like horror + stealth archery + dark myth.

Accidentally sent my response as a normal comment *sigh...* I do this all the time. You can see my response below.

Nah, we know the Roman Soldiers != Greek soldiers, and we probably won't have soldiers in our game anyway.

The barrels in this video were made so that we could fill the level fast for a prototype for us to show to people. We got pottery as you talked about as well, but it wasn't enough to prop up the levels and making it look more "alive".

But yes, we will look more at what kind of props we can use that is more connected with the era we're working with and give our own twist to it later. (: