Quite a few similarities were noted by fans in the first Grand Theft Auto V first Official Artwork. Let's find them out!

So, last week Rockstar games finally released the first official wallpaper of it's new game, Grand Theft
Auto V.
Quite a few of us surely saw something similar between the image subject and the recent events of BB.
First these men are aesthetically similar to the two protagonists of the series in the fifth season.
Both have gas mask and work suits and are supposed to be pest control operators.
But what is really exciting for us who watch BB is that the few news we know about the story of GTA V are about the pursue of richness and money.
Similar to what happened in the first seasons of Breaking Bad.
We also know that Sam and Dan Houser, the leaders of Rockstars, are both fans of Breaking bad and that should confirm at least that the game will have some sort of references to the Tv drama. 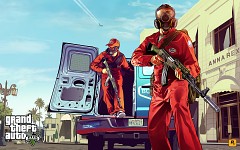 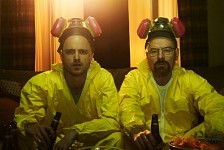