In some amazing news for players and modders of GTA5, Rockstar has officially stated that single-player PC mods are ok to make and use.

After much confusion resulting from people being banned for modding Grand Theft Auto 5, Rockstar has come out and endorsed single player modding on their blog. The announcement was tucked away in a Q&A posted by Rockstar, which we have quoted below:

Q: "I'm having soo much fun with GTAV on the PC but I just have one question about it, how come you are not allowing mods for it?" - @ClarkMatthew63
Q: "Will I get banned from GTA Online for using a FoV Mod or Oculus Rift mod?" - @Mattophobia

A: We have always appreciated the creative efforts of the PC modding community and we still fondly remember the awesome zombie invasion mod and original GTA map mod for GTAIV PC among many other classics. To be clear, the modding policy in our license has not changed and is the same as for GTAIV. Recent updates to GTAV PC had an unintended effect of making unplayable certain single player modifications. This was not intentional, no one has been banned for using single player modifications, and you should not worry about being banned or being relegated to the cheater pool just for using single player PC mods. Our primary focus is on protecting GTA Online against modifications that could give players an unfair advantage, disrupt gameplay, or cause griefing. It also bears mentioning that because game mods are by definition unauthorized, they may be broken by technical updates, cause instability, or affect your game in other unforeseen ways.

Currently due to the infancy of the community modding tools, the biggest changes you can make to the game involve Script Hook V, This alows .asi plugins to modify the games memory files. Some great examples are SuperSlowMo on demand, a native script hook trainer with fun goodies (monkey around) and you can now become the law with Police Mod. All these scripts and more are included in our GTA Script starter pack.

Whilst you are playing around modding GTA V you might want to grab OpenIV to take a peak into what makes this GTA tick. (Update Open IV 2.6 is out that allows you to edit RPF archives on PC) turn off water and improve car deformation and handling mods are now available


It is important to note that mods which affect GTA Online and give players an unfair advantage will lead to bans, which we think is fair enough. So if you are playing online, make sure you have uninstalled all mods before you play. 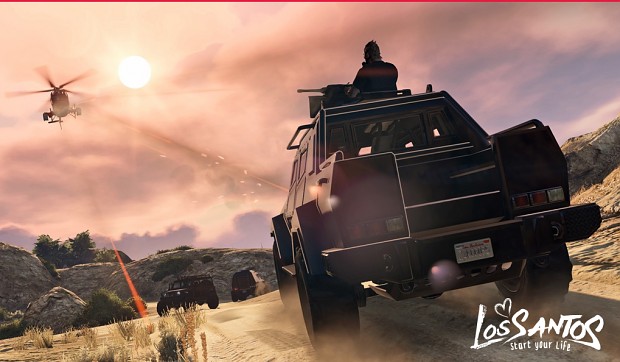 To celebrate we are going to be showcasing and featuring GTA 5 mods as they come in. So if you are working on a mod for GTA 5 submit it today and happy modding!

Excellent! I am glad they are going to allow modding for GTA5!

Ahh please someone: The one HUGE thing I am missing (and I really don´t know why they did not include it in the game!!!) is SURFING! I mean there is "venice beach"... there are waves.... Let´s go surfing! Thx!!

Exactly what I was thinking: Surf Mod!

Game without a mods is only a half-game if you ask me.Great that they allowed moddding.

It is feeling that way, though the direction mods go will be interesting

So we still don't know if these two mods are "cheats" - for all I know, better FoV could be an unfair advantage in online. I just need a simple answer - are these exact, specific mods bannable? Yes or not?

I think the bigger principle R* are trying to put across is, if you use ANY mods in GTA:O it is an "unfair advantage" and is a bannable offense, so yes, I would say those 2 are bannable, just like any other mod. If you're going to play GTA:O, uninstall the mods to be safe.
And yes, a higher FOV is technically "cheating" if all other plays in the server do not have the same 'mod'. A higher FOV means you can see more onscreen than other players, this includes being able to almost see around corners without coming out from behind the corner. This is the unfair advantage they speak of. I believe even Valve enforce this in their online Source games (ranked ones). the FOV command is disabled in console because of the exact same reason, unfair advantage. Not sure what the other mod you are talking about, but if it is the Native Trainer, then hell yes it is a cheat. The only mods that should ever be allowed online are graphics enhancement mods. But even some of those could be considered an "unfair advantage" because if the graphic mod changes the draw distance, or like, makes it easier to spot enemies at night or whatever it is, then it is giving you an advantage over other players who don't have that mod, and therefore should be a bannable offence.

I can't wait to see what modders do with this game!

"Our primary focus is on protecting GTA Online against modifications that could give players an unfair advantage, disrupt gameplay, or cause griefing."

lol pffftt... this already happens.. it's called the Armored Kuruma.

You could sorta script one already based of riot peds, just give them knifes and have them only go after you.

but not zombie story line !!!

they are not blooded type.
I hope we will soon see a good designed zombie mod.
I am currently waiting for Attacking peds(NPCs,Bots).

Theres no need to wait, in the starter pack theres a riot script, this enables attacking peds / npcs,bots in additon you can customize the weapons the peds use and if they attack each other or just you.

I know bro but they just spawn randomly.
I thought there will be a mod just like this.
Gta4-mods.com
if you have played this mod for GTA IV then you know that we can spawn peds like a level editor.

Rome wasn't built in a day, and neither was Simple Native Trainer lol. It takes time to gather all the infomation needed to make a trainer mod like that. Be patient, someone will (or already is) making one that emulates the GTA4 SNT. That trainer is one of the only reasons I've been waiting for V on PC... ONe of the most fun things to do with it, in Ballad of Gay Tony, was to spawn a shitload of peds, and give them all the same dance club animation :D

I hope someone is or try to bring content creator to singleplyer which will be better combined to all this.

waiting for ferrari to be modded in gta v....

last time I checked mods were free so how is it an unfair advantage !?

You've got that a bit wrong, R* isn't allowing modding. They have done everything they could to prevent it. It's just that the OpenIV team is better at getting into what the devs didn't want touched, than R* is at preventing it.

It's still going to be a bit before textures & model's can be imported though. How long though, is something you'll have to ask GoodNTS, AlexanderBlade, ZZCool, etc about.

Modder's should know, R* is not your friend. They directly equate modding with cheating in GTA:O in several press releases during the interim between the PC release and this last piece of marketing bs where they claim they "like mods". Don't fall for the wool they're pulling over your eyes.

Next to impossible. You need a flashed PS3 (hacked to play burnt ISO games). To do that you need an old Phat PS3 with lower than 2.70 FW or roundabouts. Then you need to find an ISO of the game, or make one, and then you need to extract that ISO, edit/mod whatever you like, then rebuild the ISO, burn it, and play it on your hacked PS3... Sounds complicated yeah? That's why it's rare and wayyyy more complicated than making mods for PC. It would be easier to make mods for xbox360 version of GTA5, same process, but 360 is easiER to flash if you have the right tools and the right version rom drive for it. Even then, GTA5 on 360 is a piece of crap.

Angry Planes contains malware that not even VirusTotal can detect. Do NOT download this!

Look at the latest news post for info:
Gta5-mods.com

It's not just Angry Planes, the same payload is also found in the NoClip.asi mod as well.

No other mods have been affected so far, although their is one person claiming otherwise about a mod loader. There is no evidence as of yet that supports their claim.

The payload is a RAT, and not just a simple keylogger as first suspected. Although the control server has been taken down, there are NO definite assurances that it can't reappear.

Also, check the thread at: Gtaforums.com for updates. Be advised, there are only a few who have delved into it deeply. Watch for posts by Alexander Blade, CKCK, Silent, sasuke78200, aboutseven, & Rappo.

Then take everything else posted with a truckload of salt, especially the reactionary "O'noez, teh sky IZ falling!" posts.

The pack has been updated without Angry Planes, it's safe to download now.

What the!? You can't get GTA V on the summer sale... its only bundled. Grand Theft Auto V, Max Payne 3, and Tiger Shark Cash Card for $74? My goodness what a bunch of greedy asshats. They just lost themselves a customer permanently.

Does anyone know the money mod for gta v for xbox360. If so I need it please