The importance of a good research can save you a lot of work.

As Sebastian put it last week, we are developing Apollo’s level. Every level in Okhlos will be based around a Greek god.

Apollo is the god of order and perfection, so in the game he will have a little OCD. As the city is build up around him, we focused on making it look very neat, and that everything was in order.

First, we chose Delphi as the main city, because it had the greatest Apollo temple in all ancient Greece. The first misconception we had was thinking Delphi was an island (I think it was because the argonauts searched for the Delphi’s oracle in a fracking boat). So that made me do a few concepts of an island, that eventually, when I entered Wikipedia and found out, I discarded with a vicious anger.

The good thing, is that the new findings made me go to google maps and search how the city is right now. Amazingly, it is almost intact! We took the original layout of the city, and gave it a more harmonious and symmetrical design (because, you know, Apollo has OCD). 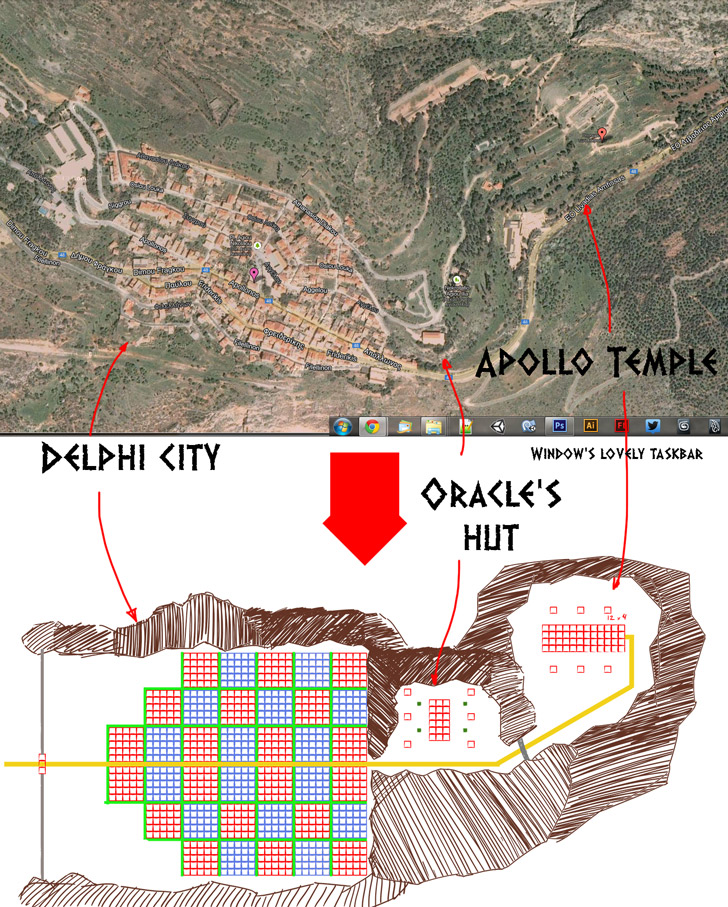 As you see, the city looks very inorganic, and that’s what we searched for. Future levels will have a more organic/city look. Each square represents a tile, which usually is the size of a little house. Also, there are three major elements: Apollo’s temple, the oracle’s tent, and the main city.

The temple will be the scenario where the confrontation with the god will take place.

You will have to do some things in order to be able to defeat him. 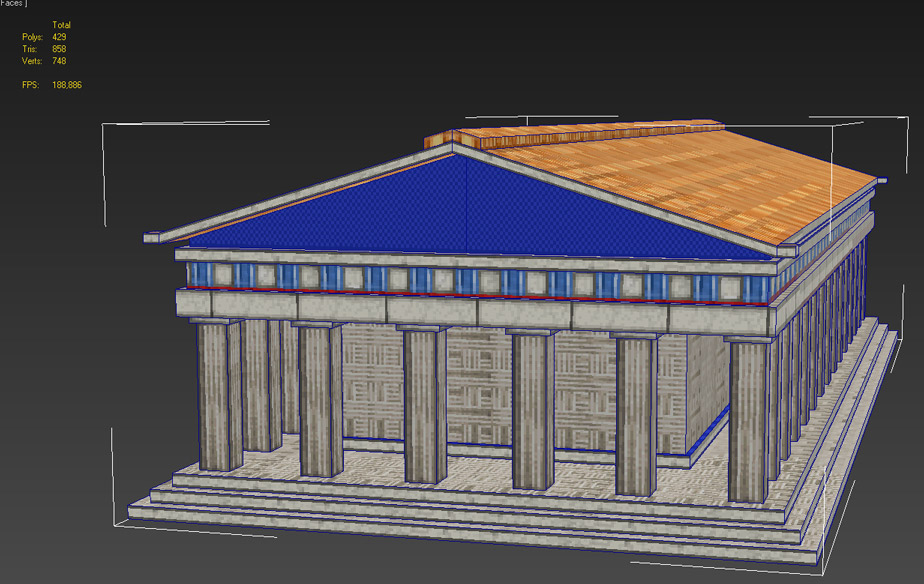 This is the max version. As you can see, we try to keep the polycount very low. Not for performance reasons, but to achieve an overall look.

This is how it will look in the game:

As with other buildings, some of the decorations are sprites, while the main building is a mesh. Also, the bump mapping in the material works perfectly to make the pixel art in the texture more visible.

One of the puzzles to solve in order to defeat Apollo, involves some of the pillars that the user will find around the temple:

The tent will have some encounters with the guardians of the oracle, also, there will be some light puzzle solving around the tent.

Note that the tent’s texture is not final.
Also, you will see that there are some stakes, which again, revolve around solving something in this part.

Well, that’s pretty much what we where doing the last weeks. Programming wise, they were doing some other boring technical stuff, but I prefer not to ask what.

I really enjoy reading your news. Good luck with Okhlos!

dude this game looks so good, and so original! also I like the clever map design :)