Well, like the title says, I have bad and good news to give regarding NW3.

Well, like the title says, I have bad and good news to give, so I will start with the bad ones:

1 - It happens that it's now impossible for me to release this in December.
I really wanted to release this pack this month, since it would be the best time for almost everyone, however it's now impossible due to certain RL stuff (not "issues", but simply lack of time), and since now it doesn't matter anymore the exact month to release, it will be delayed 1 to 3 months, which means that the new public release time will be between January and March of next year.

2 - There's a weapon I won't do anymore: Cybot Order Giver (or something like that). The point of it was to give orders to cybots to make formations, however I thought a bit further on it and I realized it would completelly useless in-game, and complex to do (not the weapon, but the different formations, since it would need somewhat a more advanced AI and quite a strategical knowledge I currently don't have to make such AI [I suck at chess, nuff said lol]).

1 - The new cybots will be more complex, more intelligent and challenging, and will be visually much more superior (from the transformation to the actual "pawn" movement and animation, or at least should be lol);

2 - This put, I won't release a main version first and then a Bonus Pack later, instead I will release everything all together: remakes and new weapons announced (well, this might be good news or bad news depending on the perspective).

3 - Before the actual public release, I will potentially need to beta-test it first at a private server (mostly because of the NW3 core), which means I will need beta-testers later, which means that some people might be able to try them out before release. Depending on the number of willing beta-testers, I might have to make a selection, or not even do the whole beta-testing alltogether, we will see.

4 - During the beta-testing time (perhaps 1 or 2 weeks before the actual release), I will try to pull out a simple map for the nukes, not just an empty big room, but I will try to pull a nice looking outdoor map for all kinds of gametypes, but I won't promisse anything.

5 - Although I didn't plan to show further updates, as I had to delay the release, I will post some screens or sneaky pics times to times, since all there's left is the cybot launcher, the nukes, some core features, and the BP content (a melee weapon, one or another utility and the ion nuke), so people don't think this mod is inactive or something (otherwise when it gets released people would have already forgot about it like I saw in other people's mods), when is actually quite active in its development. And talking about it, this is the new Cybot Launcher: 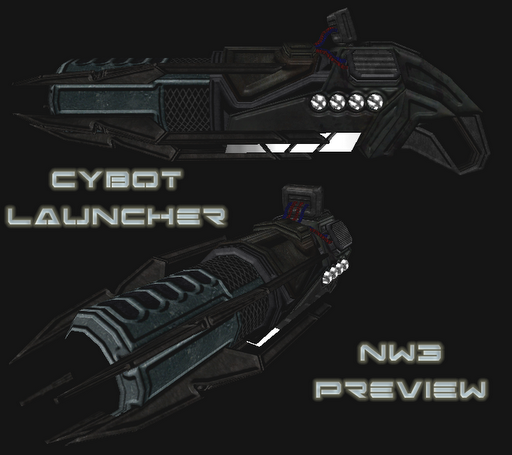 This is all I have to say for now, I hope you all understand (I don't like it this way either, but it has to be this way so the pack fullfills everyone's minimal expectations).

I have a few questions.

There will be more(new) Cybots or just the same ones in NW2?
And what are the functions of the new Cybots? (if there are new Cybots)

Regarding some cybots, some will be remade, others discarded and there are going to be some new ones indeed.
The remade ones will be the: force field, kamikaze, vortex, the Z and Y ones, and potentially the TX one (the one which fired in all directions).
All the others will be dicarded since they proved to be useless anyway in most games.
The new Y ones will actually follow the player around and make fly maneuvers relative its enemies.

The new ones are a cyborg one (it will basically be a small full robot with 2 weapons: a melee one of close range combat (headshots) and another for medium and long range one (will fire high charged lasers or plasma or ion, idk yet);
and potentially a "flying squid" one like those "squid robots" from the Matrix movie, which will have the same attitude as the Y ones, but will be more agressive, stronger and fearfull (they way to attack will be actually different, and they will be the only ones supporting underwater combat);
and also perhaps a "spider" like one, which I am still thinking about.

you should really add some mortar like cybots... like put them behind your base and they start attacking... well that was a idea i had for the cybot controler thing.. that failed.. or add a cybot that shoots out rockets... or add spider looking cybots that move around and move with the person that made them... and then if they see a enemy they start shooting.. then the other type of it was the kamakaze one.. im just giving random ideas that i was thinking of :l...

and for the Ion satalite thing.... there should be 2 types... 1 plain ol Ion.. and the other one.. is the one that shoots threw walls and kills any thing it tuches.. almost like the I.R.P.R but Instagibish... and for normal weapons... should be a plasma rifle... plain old plasma... and for a alt fire for it should be a conentrated blast of energy that takes 2 hits to kill some one.. and or just shoot them in the head and there hole body explodes.. :D... just..giving random ideas >.>