Today we are talking about the addition of goal modes to AHL2 and why it has been quiet for the past half year.

Admit it, this news post sneaked up on you. At some point during the past 6 months you may have thought that this project was dead. Fortunately, it isn't. Today's news post is about what has just been finished and why it has taken so long. Let's start with the fun stuff, the newly finished feature.

To make it short: goal modes are back. Back in the day AHL1 had goal modes implemented, but up to now they were a missing feature in AHL2. With v3 they make a return, and they are better than ever before. Virtually an unlimited number of goals is included as mappers will be able to create their own goals using generic goal items and zones. For those of you who want to include goals in your maps but without thinking up any cool goal logic, there are three pre-defined goals which can be added to your maps very easily. These three goal modes are Capture the Briefcase, VIP and Dante must Die. Capture the Briefcase is similar to usual capture the flag modes known from other games, VIP is about safely escorting a member of your team to a target zone and Dante must Die is a major frag-fest. This requires a more detailed explanation. For Dante must Die there is an item in the map, by picking it up the player becomes Dante. This means his damage with all weapons is boosted and every kill means 1 point as well as receiving a bit of health back. This may sound like an unfair advantage, but it isn't. Normal players do not receive any points for killing other normal players, but 10 points for killing Dante. Basically you got one super-powered player and everyone else is after him. Sounds like Action to me. The other two pre-defined goals may sound boring as they are already known from other games. That's why we put in a few tweaks to these goals to keep them interesting. This includes that during a round it may happen that all teams have to capture the same briefcase or different briefcases but they have to take it to the same capture zone. The same goes for VIP mode - teams may have to take their VIP to the same escape zone. As VIP is also a roundbased goal mode and it's possible for mappers to include several escape zones which are either bound to a team or free for all the game is free to select different escape zones every round. The generic goal items and zones come with several parameters mappers can set to create their own goal scenarios. These range from very complex scenarios to simple things like making players hunt down an item which gives back health. Since all this flexibility in gameplay still needs to be playable there is a goal info panel on the HUD during goal modes which always tells you what to do and where to go next. As if I had planned it, this brings me to show off two screenshots. 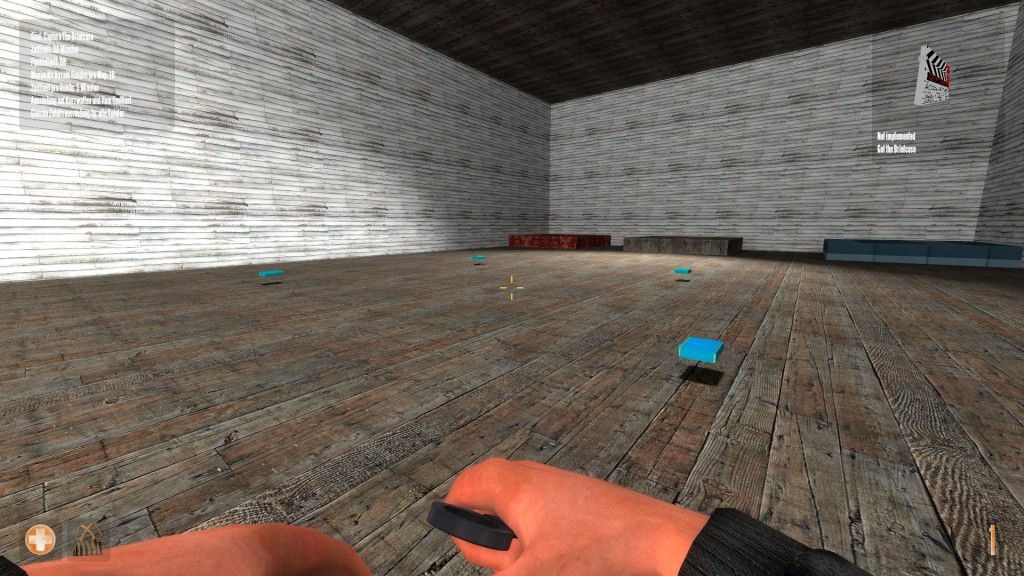 My kind of ugly test map, and even made it much prettier for the screenshot. What you can see here in the upper right corner is the goal info panel I just mentioned. The pointer shows you where to go next (obviously a bit to the right at the same level) and what to do there. The line which currently leads "Not implemented" shows the name of the location the next target is located. But the location naming functionality is - you guessed it - not implemented yet. The upper left corner shows the game info panel. It contains information about what kind of game mode is played at the moment and the game modes parameters. While the goal info panel is shown all the time during goal modes, the game info panel is shown for 20 seconds after map starts and every time you press the button to display it. It will automatically fade out after a few seconds. What you can also see is the re-worked HUD as it has already been shown three news posts ago. Except this time this is actual in-game footage and previously it was just a screenshot which was edited to show the concept. 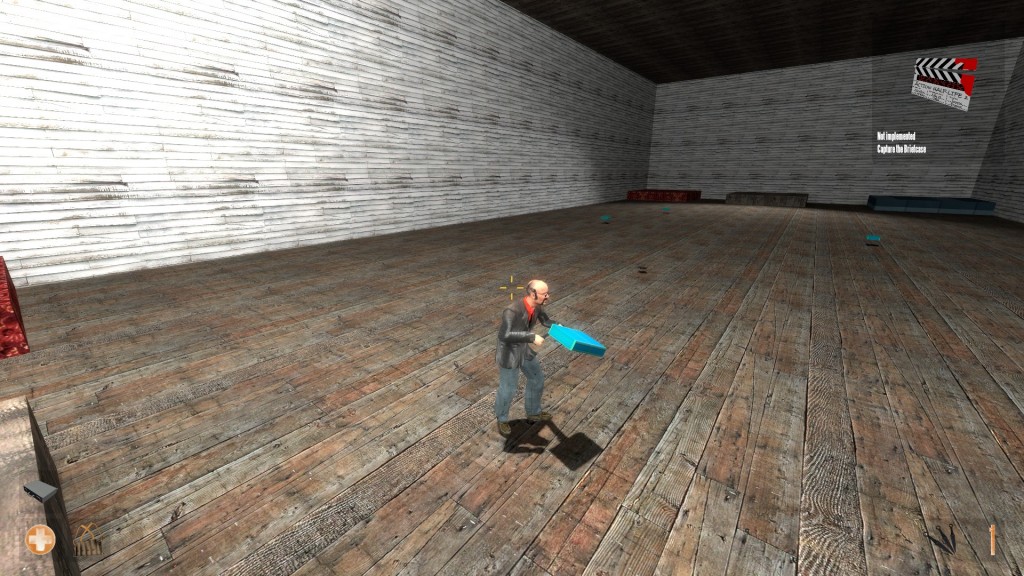 This third person perspective screenshot shows a player actually carrying a briefcase. Goal items can be shown on the player, either in their left hand or on their back. And yes, the briefcase requires a final texture.

Now that you know about the goal modes we can talk about why there was no news post for the past half year. The answer is: there was nothing to talk about and I am not a fan of news posts like "we're still working on it, but there's nothing we can share at the moment". Which brings us to the question why we did not have to share anything. First of all, the overall team is very small and for the last three years I (eddi, posting with brad's account here on moddb) was the only coder. We face the same problem as many other mod teams which work on their games in their spare time - spare time is limited. Also limited is the motivation to sit down and work on something after a full day of work or during weekends. In combination with the goal modes this becomes worse as they proved to be a real motivation killer. After reading the information on the goal modes above, you now know that they are very dynamic and flexible. They were meant to be that way, so there was a plan of how to implement them. Now, they had to be added upon the existing game logic and on several occasions this brought up stuff I did not think of before. The result was that several things had to be implemented differently than it was planned, sometimes more than once. So, when you are to decide whether or not to sit down and work on the game and always know that it most likely will not go as smooth as it should you tend to think twice if there isn't anything else you could do with your spare time. On top of that, what I do for a living requires me to sit down in front of a computer as well. As some of you may know sitting around all day sooner or later results in you facing some problems with your back (I'm working on fixing these problems, but this will still take some time). At this point you got limited spare time, a feature which has the potential to kill off your motivation and health problems - now you can imagine why it has taken so long.

While there is still lots of work to do for v3, anything else on the list is way easier to implement than the goal modes. We will bring you AHL2v3 as soon as we can, judging by what's still on the list it'll be a great release. Until then, please bear with us being slow to develop your favourite mod ;)

More news posts are to follow once there is new stuff to share with you. And now that I'm done writing this: sorry for the extremely lenghty news post.

Is there a possibility to make deals for briefcases? :3