Misc Stuff:
Due lack of time (and RAM) we decided to remove the Allied Team and keep the game
with Axis and Red Army only. (Because the Soviet weapons are more cooler than the
U.S. weapons haha xD :P)

We expanded the Class Editor abit (mostly on request) with a few more things.
You can now access the class editor from ingame menu and you can also now (finally)
select and play as a female playermodel. 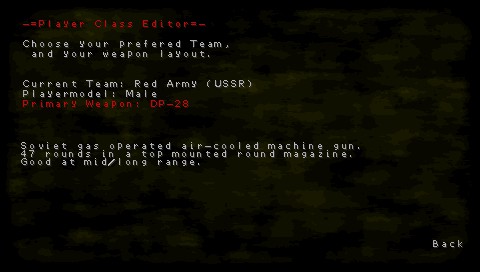 Gameplay releated:
Bots have been improved! They will now hopefully never act like a weird fart, and they can now
also use the knife.
Also the players will now able to select the bots skills (from N00b to veteran difficulty) and the
bots weaponlayout (own layout, same as player etc..)
Last but not least: The bot chat simulator is completed..
They will now randomly leave a message when connecting, leaving and when they are getting
killed :D 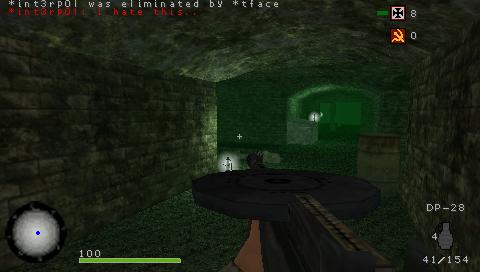 Upon reqest we added the FG-42 paratrooper rifle back with the telescopic sight.
This is the only scoped weapon in the game now (and its very opwerfull). 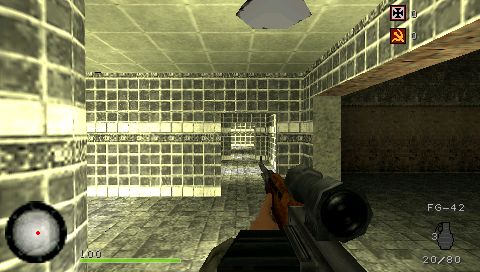 Look thru the telescopic sight: 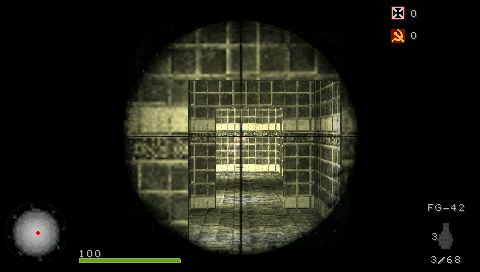 Maps:
The final maplayout is still WiP, we might need to kick out some maps due beiing laggy..
A Beta release is aimed for Easter 2015. Depending on the feedback we will decide whats
happening with the PSP port in the future.

Cool! Now for some questions:

1. I saw that you added the bot skills. Does this mean you no longer use the config file for random bots for things like accuracy or response time? I love being able to customize bots :)

2. When you have time, can you list the damage and fire/reload rates for the weapons? :D

what you should do, is add in some other active members of the community into the game as bots... i mean, not saying you should add me, but you know, if you ever need cannon fodder i'm pretty sure most people on wouldn't mind being destroyed by others

the current botlist has about 50+ names, some are already community members xD

holy crap, that's quite a number. but on an unrelated note, 17 is also a number

also, could we get a list of all the community member's names you used?

It'll be out next week, maybe just wait until then to see the list of bot names?

On a sidenote, if it were me, I'd make Jasbot have god mode enabled. That way, no one messes with ze Jasbot. :P

Edit: found the post that said that, nvm. SWEET!!!

Please have me on it, please? xD