Fw:ToW's replacement for missions comes under the form of large-scaled battles. Our team has almost completed the first of them : a Battle of Yavin simulator.

No more missions. So what?


Hey all! I've never got the chance to post something on Moddb so far. Though, lately I've been working on quite a lot of things : I've put some numbers in the capital ship prototype we're working on, and made the first tests. Meanwhile, I've populated most of the systems with NPCs. I may show you some areas soon.

However, today we're going to talk about something else. As you may know already, there will be no missions in Freeworlds: Tides of War. So, the question is : what are we replacing them with?

The first idea is to put a lot of hostile NPC everywhere. That's what I've done when populating systems. Around 10% of the NPCs you encounter are pirates. The galaxy isn't homogeneous : core systems are safer than Outer Rim territories, and even within a same system there can be huge variations : stay close to Military Checkpoints and Police Outpost to be protected! On the other hand, most of the pirate bases are under imperial or republican assault.

Besides, around eight months ago Aldebaran came with another, new and great idea : the Raid Systems. You may have already heard this word before. Basically, they are small systems dedicated for fighting. In these systems, you will be fighting waves of NPCs, and progress in the system until you reach the final objective (for example, a boss). With Raids, we're not only replacing missions, but we're giving them a background. You're actually trying to do something, and not just kill swarms of NPCs without thinking.

Although this is a great concept, nothing had been done so far. You've guessed that I'm here to show you the first Raid system!

The idea behind it is that we wanted to put the awesome Death Star Zaxx and Sov have done. However, in 12 ABY the Death Star shouldn't exist anymore. Thus, i've thought about using the Raid concept to create a simulator of an Historical Battle where the Death Star was present. Of course, i want to talk about the Battle of Yavin. 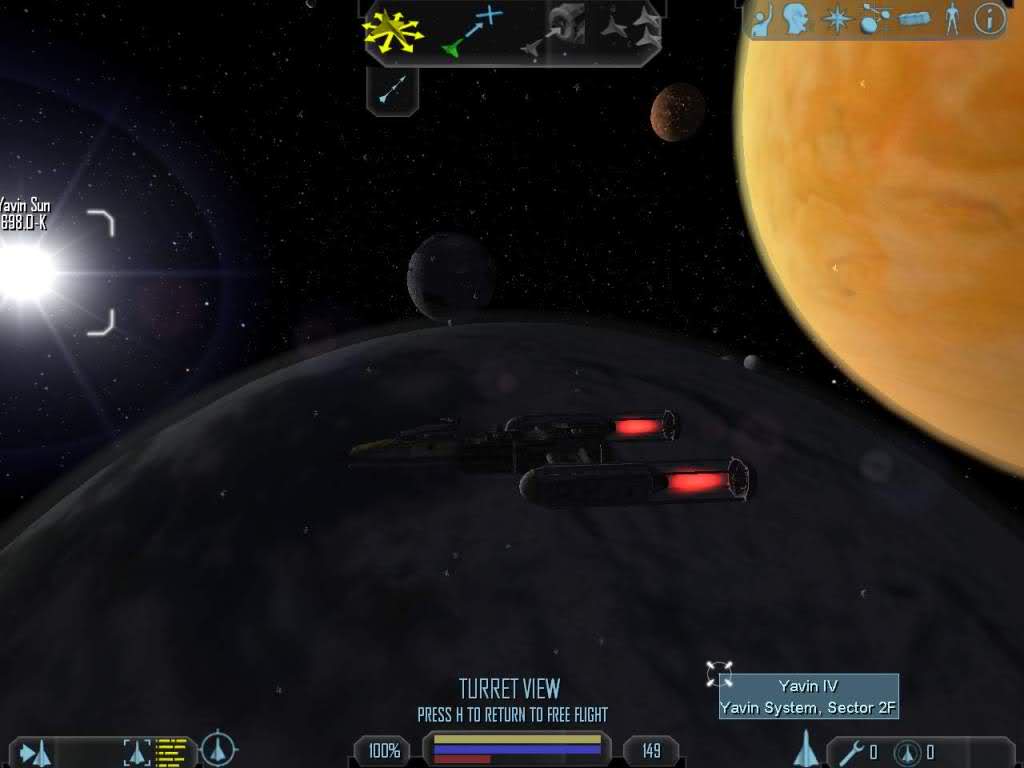 Here is the explanation i wrote in the Development Section :

"Deety" wrote: But think about this. As a Rebel :
- you dock to some capship somewhere in republican space. When you undock, you can jump to a Republican Fleet system (as you do for every Raid).
- there, you choose the "Battle of Yavin Simulator" buoy. Undock, and you "jump" (we can do some kind of jump sequence to show that you're entering the simulator) to Yavin. This Yavin looks like the real Yavin, except that there is a Death Star instead of its debris.
- we'll think about a way to kill the cruise speed (Interdictors?). Then, all you have to do is to reach the Death Star through the ennemy lines (TIE swarming!). We can think about secondary objectives : for example, you have to kill an ISD to use a jump buoy and get closer to the Death Star.
- once you reach the Death Star, the trench run starts. You have to get to the otherside. Heavy, accurate towers can prevent you from getting out of the trench. You win when you kill the exhaust port with a torpedo. 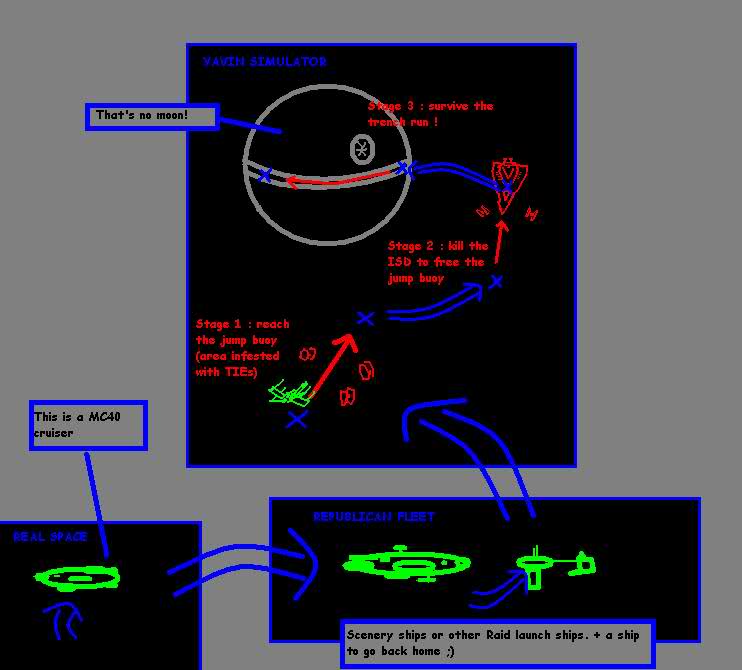 This was written one month ago. Yesterday, I've duplicated the awesome Yavin system Oma made and tweaked it to create the Battle of Yavin system. The battle is divided in five stages. I've used tradelanes to link the areas together :

The battle still needs a lot of tweaking, but it begins to look great. Here are several pictures to give you an idea : 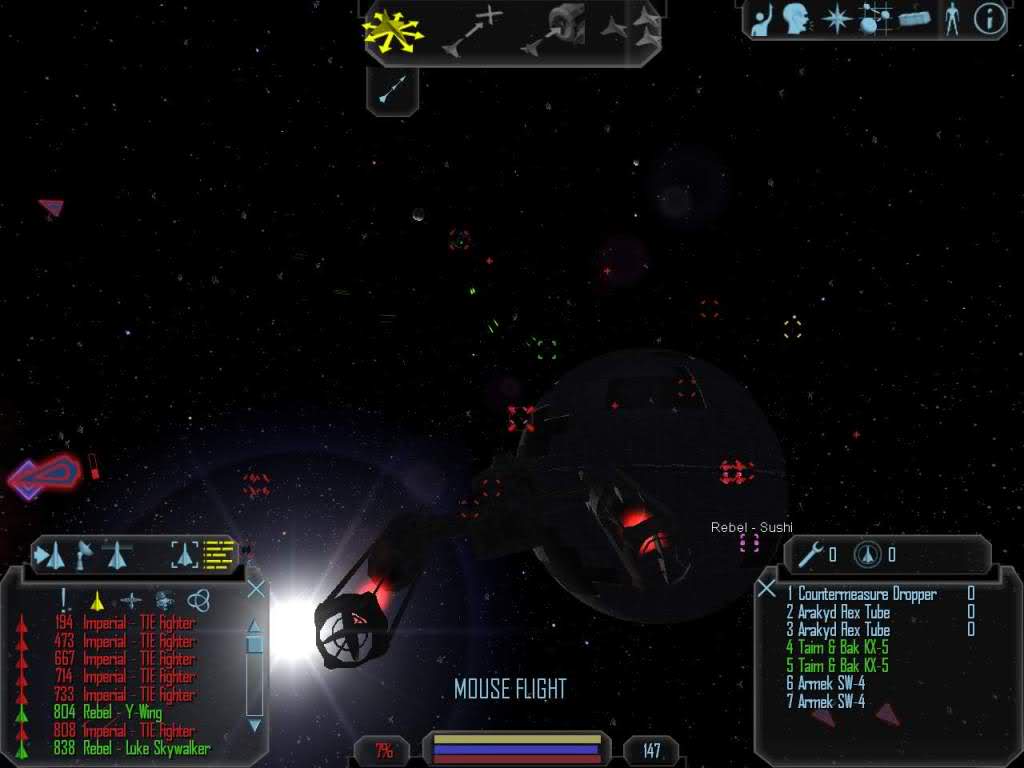 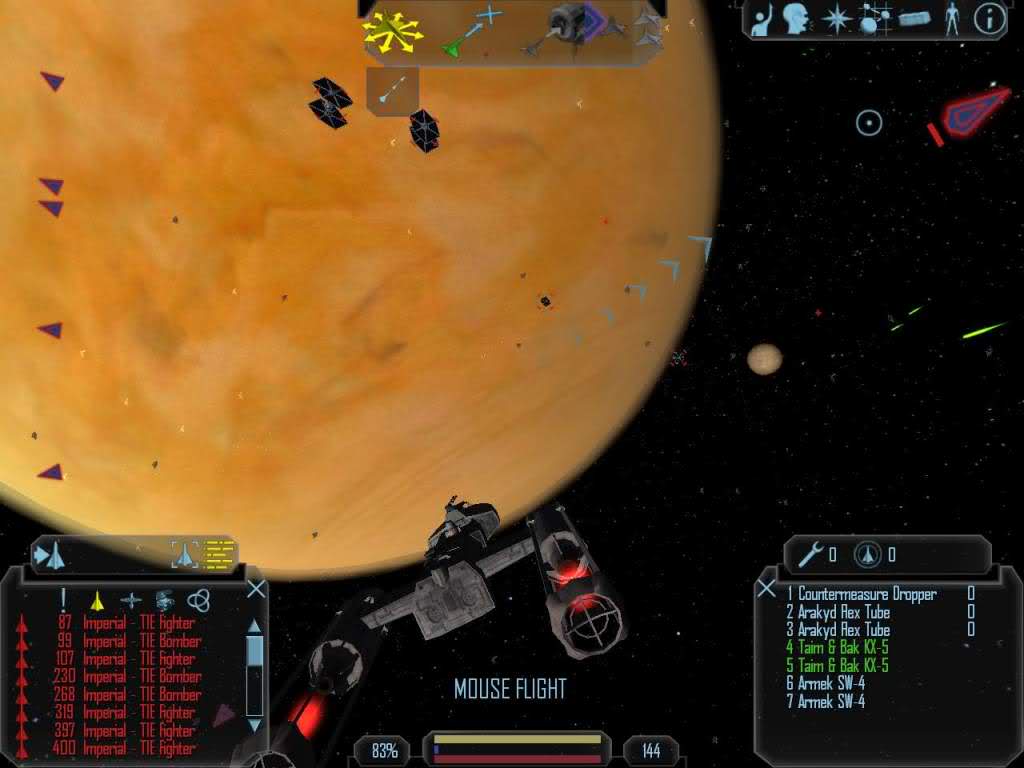 A Star Destroyer you have to destroy : 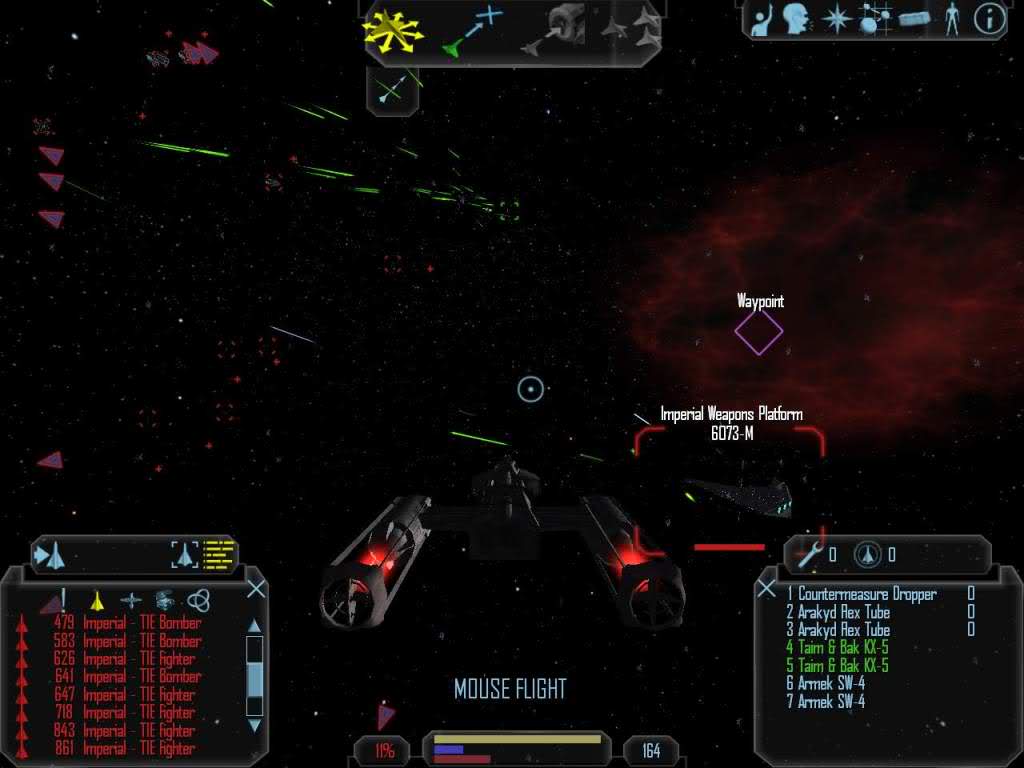 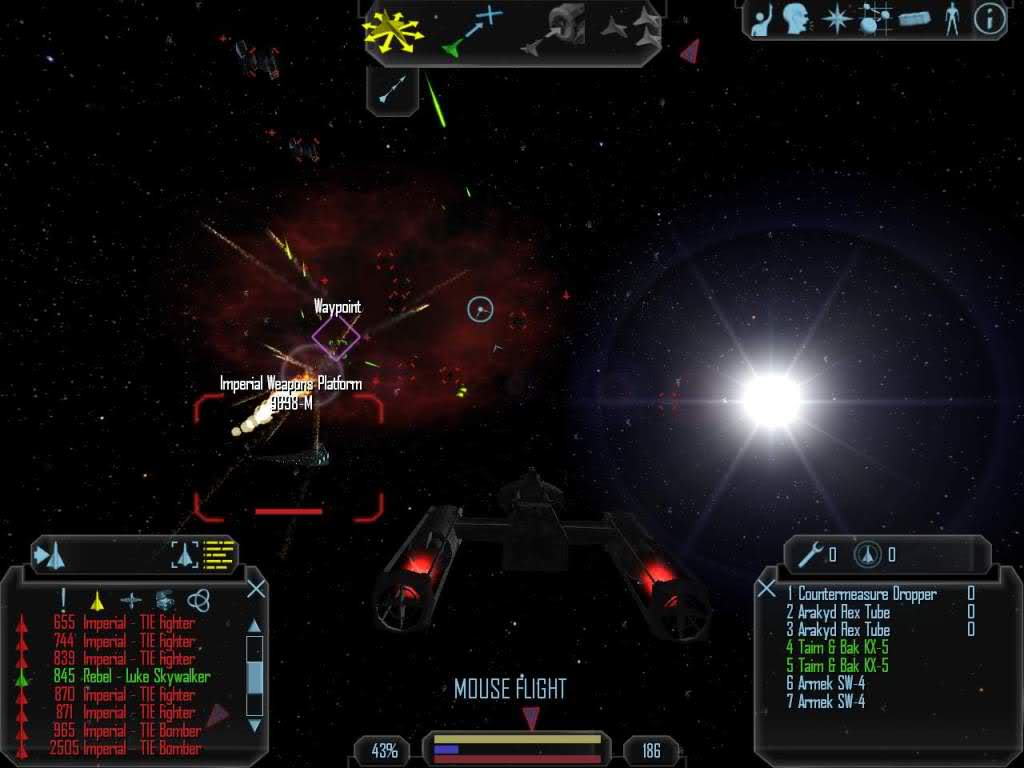 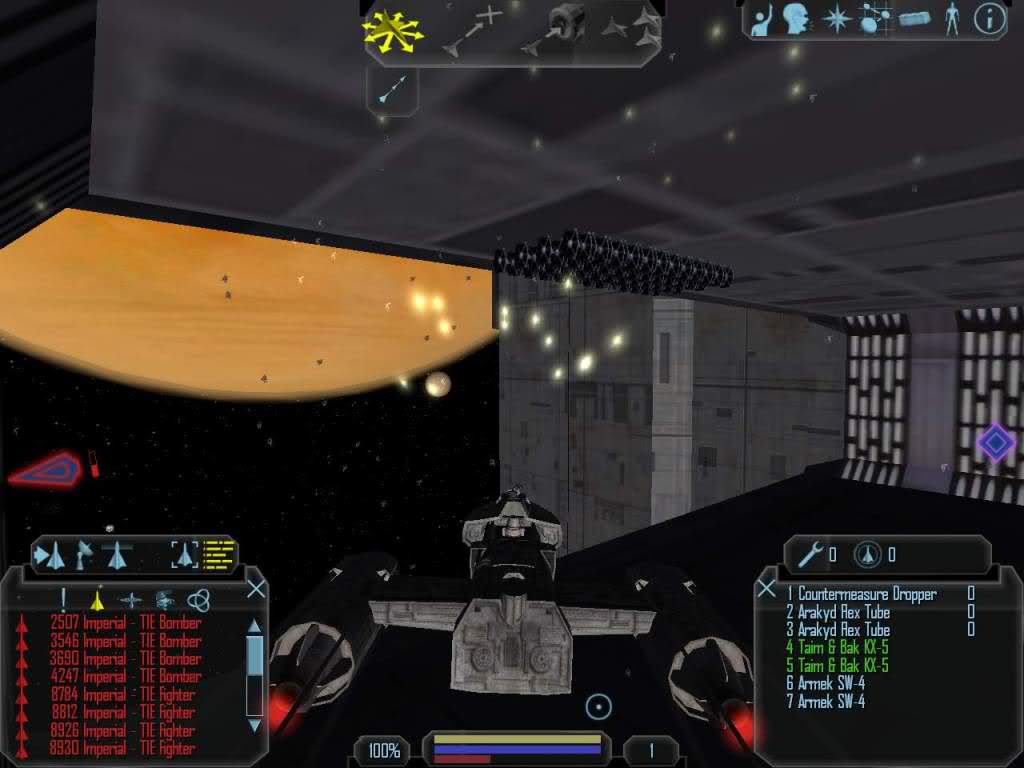 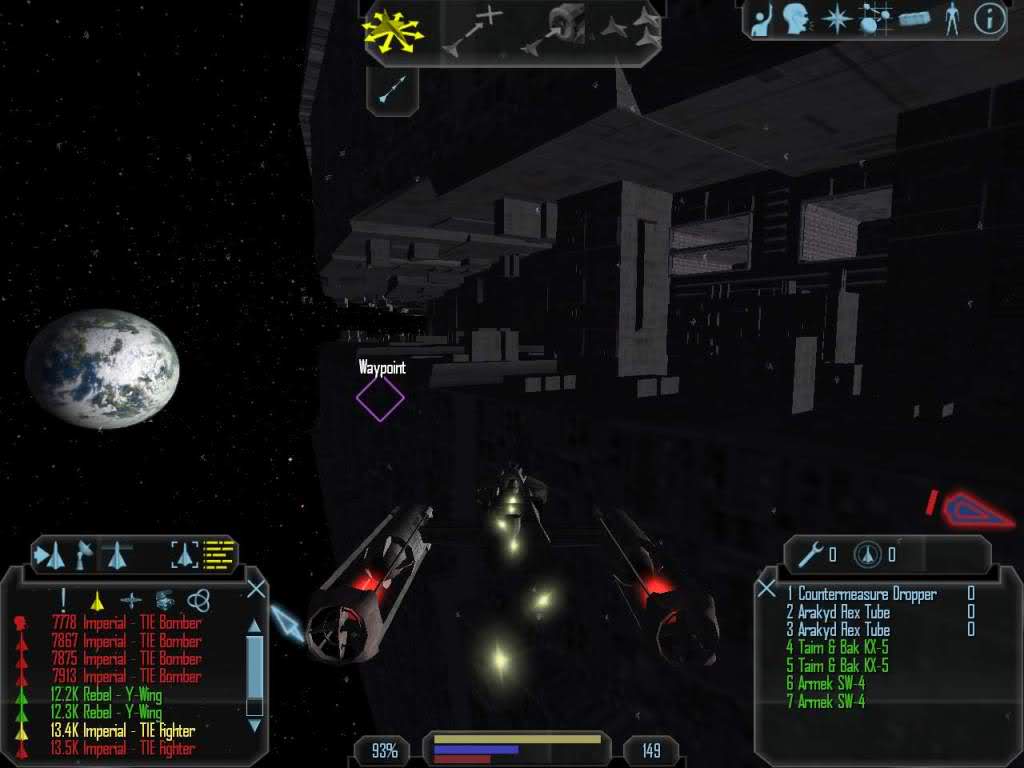 The NPC forces are the following:

You may argue that there weren't TIE Avengers in the Battle of Yavin. However, as they're based on Vador's x1 prototype, i believe it makes sense to put them in the battle too. Furthermore, they represent a major challenge. You'll need a lot of friends to go through all the different battle areas!

To finish, Sushi has spent countless hours working on a presentation video. Enjoy !

This looks AWESOME!
could you publish a video of the trench run?

Definitely. When we get it bristling with gun installations, it will be on my todo list :)

If I smoked, I'd need a cancer stick right now!

Looks great, even though I'm not a third person dog-fighting kind of guy, this might just convert me enough to shell out $10 for the game so I can play this TC.

Your team has done a LOT of work on this, and it shows.

That's quite a compliment, thank you :) If we can convert a few more people to play this game, that's all we can ask for!

Oh man i'd LOVE to play this mission even though i'd like in essence to be in the dreaded Imperial Navy as i would like to command an ISD eventually. If you do not mind, i have some "idea's" for your similer plans like this. Would it also be possable to do "other" battles from the movies and also books? Example; The Battle of Endor where you have to first fly to the Death Star only to find the shields still up then as you turn you find swarms of tie fighters coming your way but not the Imperial fleet. The Imperial fleet is sitting still and not moving in to attack for some strange reason. Then after a wave of them you have one of your NPC Mon Calamari Cruisers get hit by a blast from the D-Star and you must attack the ISD's at point blank range. After destroying the Super Star Destroyer and maybe a few other smaller ships, you have to fly to the Death Star along it's surface past towers and unfinished structures till you get to the opening of the super structure. Fly into it and follow it till you get to the reactor while evading Tie fighters. Once at the reactor you have to blast it with two torpedo's or missles and then try to escape the encrouching fire blast from the inside out. I'm sorry this is so long. I'm just excited about all of your works and though i'm unable to have the knowledge to help the way i'd like to, i do have plenty of idea's if you'de like some fan feedback. All my best to you Gods among men !

I always hated having to trade, and missions bored me in Freelancer. This would make me very happy to just fight:)

But is there any chance raids could affect the system? Besides just a boss being killed?

Right now, the whole Mission/Raid Idea is pretty much a stand-alone concept.

Although, we are looking into the idea of implementing some stuff that would effect the universe on a day by day basis. Probably the best example is an idea thrown around for illegal narcotics. That if they are shipped extensively to a planet, the price of it's other commodities will suffer because of the presence of intoxicants in the population.

Now, suffice to say, that is the concept idea that we are hoping to pull off. It is still very much at the development stage. Hopefully, it will come off like so many other ideas of ours, but just don't quote me on it! :)

Really nice, I so gonna reinstall Freelancer again. Looks a lot better than the old versions I used to play ^^

We have worked very hard on every aspect of this mod, to try to make it look right as much as feel right. Hopefully when the final product comes out, we will have something that appeases most.

Amazing work. Can't wait to have a shot at the old trench my self.

just wondering, what are the current top speeds for the x-wing, y-wing and the tie fighters. Also, how exactly will you keep the players on the trench during the run, because they may pretty much get out for more space to maneuver. Big really deadly turrets with perfect accurracy?

The current tops speeds (with thrusters) of the X-Wing, Y-Wing and TIE-Fighter are: 225, 188 and 214, respectively. We realize this isn't canon speed, however, the game was much too slow if we used those values of MGLT. So, with that in mind, that's why we used these values.

As for the trench run, we have a few ideas. Turrets being one of them. Another idea is death zones, we'll have to see when we get more completed of the scenario.