Read about how we're going to approach the end of development on Frozen Synapse...

We're back with some more news, but first let's drop some video goodness in your general direction...

Games of the Week
First off, here's a nicely brutal game between Deozaan and Mouser:


And here's a nice tutorial from the awesome Sixth - watch out for more games casted by him in the future!


Interview on RPS
Have a quick read of this in-depth interview with Lead Designer Ian on RockPaperShotgun...then come back fore more Frozen Synapse news!

Menu Update
We currently have some new menu features in public testing - if you're a beta customer, you can grab the test build from your regular download directory - just replace the filename with rc11.exe.

New "Home" page with Featured Game, News and Rankings leaders
New "level" system allowing yourself to see your progress and compare your ranking to other players
View your record vs. specific people
Better friends system
New "games" tab allowing easy switching between games
Properly organised rankings
Better Feed to keep you aware of what's going on
Better commenting on games
Match-up screen which shows who is favoured going in to every match
Clearer win / lose at the end of matches

This is a huge improvement to the menus; the Games tab in particular is a massive improvement - no more irritating switching between the game and the menu to traverse through your active games.

Once this functionality is all tested, the only thing left to do with the menus will be to improve their art, tidy them up a bit and bugtest them. It's a good milestone.

UI Push
Starting tomorrow, we will be attempting to finish off the in-game UI. This is a big challenge - we'll be trying to do fixes which make the game more accessible to new users, as well as allowing advanced users to get over some of the problems with super-complex plans.

We will try our absolute best to make the game as easy to use as possible - the UI is extremely flexible so it's difficult for us to get rid of all possible snarl-ups, but we will try.

When the current UI is actually bug-free, and a few minor new features are introduced, it will be in good shape - I'm looking forward to seeing the results of this.

Single Player
At the moment, we're working on adding more interesting buildings and scenarios to the existing single player content we have ready. This will mean that levels will be a lot more characterful, like this one: 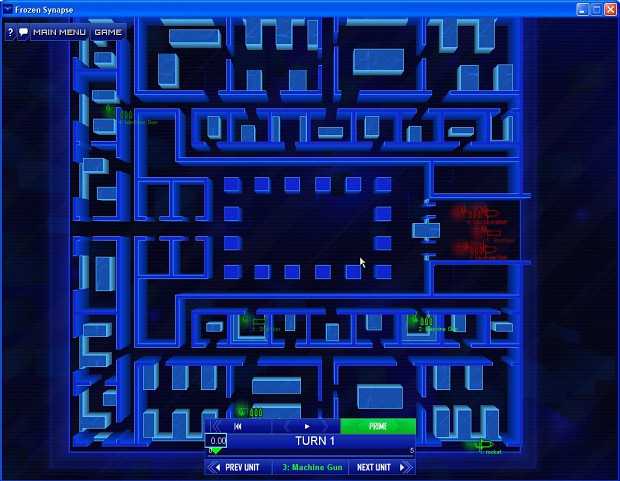 The single player script is in a fairly functional draft form; the character avatars are almost done and we're really excited about them. They've been made with a fairly innovative art process by our new uber-art-guru Rich and I'm looking forward to revealing them to you.

After this UI push, we'll be all-hands-on-deck with the single player - the aim is to get a working full build ready for the end of the month so we can start delving into it and doing a lot of small tweaks.

There will be a few very short cutscenes in the single player - probably the most significant of these will be the intro sequence, which I scripted and wrote the music for in my spare time this week. I think these will help add some of the background and atmosphere people have been hankering for.

Some final sound is ready to go in - we need to do a short sound push to get that all sorted and I'm expecting that to happen at the start of next month once single player is in better shape.

Business Stuff
Sales have been pretty good this week thanks to the RPS coverage. The pre-order is still sustaining development, enabling us to do this slightly-more-ambitious single player to the best of our abilities. We're really hoping to get a spike when we do our initial release / pre-order on bigger distribution platforms, so we'll keep you posted about that.

We're starting to get more sales from places like Stumbleupon and Reddit - just general traffic finding the game and getting interested in it. That's really where the game's fortunes will be made or broken - it's all very well getting nice sales and traffic from specialist sites but if the game is to have a long-term future then it will be down to recommendations to the general gaming community. Cheers for all your help along those lines so far.

Chiptune! Chiptune!
We got a really nice response to the release of the _ensnare_ album, with many of you choosing to opt for the "Support Mode 7 Premium Edition"! Thank you very much. If you haven't heard the album yet, take a listen to the preview below:


I hope to do more _ensnare_ material in the future - hopefully I'll get some time to work on it when the game is done. _ensnare_ is an entirely "spare time" project for me - just a pure labour of love - so it's nice to get some attention for it!

Thanks! Nope, all the music is original.

ô.o I don't usually care for music updates ... but this is pretty awesome.