The new Fronltines is comming! With 40 gametypes, 12 weapons modes, paratroopers support, with the War Server with Random battlefields up to 3999 battles in the SAME war and LOTS more. 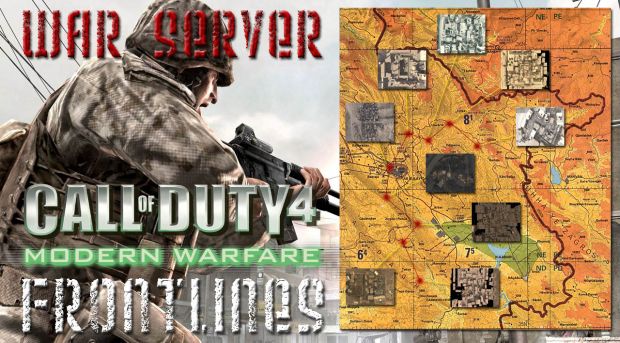 You all already know that I'm working on a new version of Frontlines since the Modern WarFAIL 2 was revealed last year. Was many and many many hours of work specially because things that should be easy to do wasn't at all because the limitation of the engine, which forced me to simply rewrite the main spine not only of my mod, but in a way to change the main spine of the game.

First was the gametypes limit which made me rewrite all the map/gametypes behavior of the game, then was created the Frontlines Commands to overrun all this. Then now is the allocated memory of the game, there's no more memory available for my code! The new version is so huge that seams they never expected a mod of this size ever, but I can't be mad with IW for this because this kind of thing was never made before, and probably will be the last time too.

To who didn't understand what I mean with "out of allocated memory" is not the case to simply put more RAM on your machine. In resume when you are programming you need to reserve memory to later put your code there to run, so the original COD4 have his size already fixed (which is normal) and let some memory free to add the mod code, and that reserve memory is not enough from what I created.

Well, I did what I can and the current version is working really fine and it's VERY stable like never was, the only way to crash the server right now are because very bad coded or incomplete maps but even with all that kind of maps 99% of the crashes will be avoided. First because the Frontlines Spine implementation I can know the errors before reach the main spine, then I can simply change maps/gametypes avoiding the server to crash. Also was created a Bad Maps List to you set all maps which have problems. With that you can teach the Intelligent Server to what he can do, and what he can't with which map/gametype on that list.

Of course you can use the Bad Maps List also to avoid some gametypes to be played on each map, because simply is not fun, or the map don't have heli support, or anything else like your taste. Then the Intelligent Server will think like you when select the maps/gametypes.

Well, until now I was talking about coding which is not that interesting for regular players... so let's talk about gameplay.

First we have now 38 gametypes in Frontlines! Yeah! 10 were already added and working really well. Here the list of the new gametypes with a small resume of each one, the picture is from the AirFight gametype. 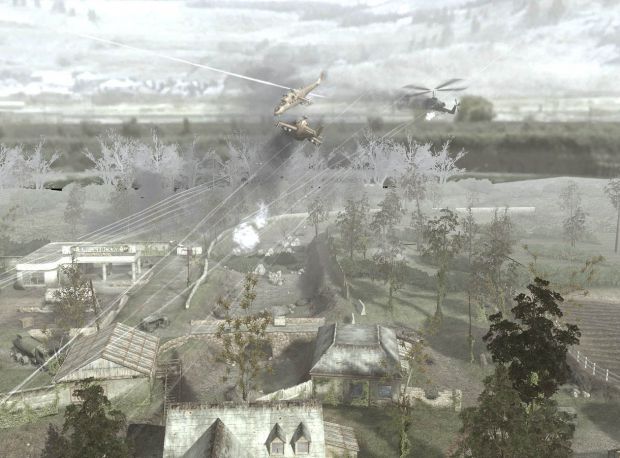 . AirFight
TDM with Choppers designed for the small rotation.
. Airborne
Paratroopers falls into enemy territory to retrieve 3 docs.
. Capture The Flag
Famous Quake gametype attending requests.
. Evac
Everything is colapsing, both teams must Evac his men out of that hell.
. Invasion
Carry your flag until the enemy spawn to conquest the territory.
. Mission
Several objectives to complete in a mini-war kind gametype with paratroopers and infantry at the same time.
. Savage
Like Black Hawk Down movie, retreat to call a pickup chopper to get out of angry civilians bare armed.
. Strike
Assault gametype with Paratroopers attacking.
. Support
A ground team have until 3 choppers as support to complete a objective. Few players are selected to be the Heli's Gunners to support the ground team.
. Swarm
Hill gametype but the flag can be carried. The carrier must be in constant movement which force the team scout him accross the map.

All are there working at War Server and with all addons as possible... and talking about War Server we have now a new feature called Battles Mode, different from the original War Server this time you didn't set the battlefield, all is completely random, then you just set the number of battles needed to win the War, then who wins that number first wins the War. Now it's possible to play Wars with battlefields up to 3999 battles (maps/territories).

All the options of the War Server still available of course, setting number of soldiers, reinforcements, realistic level or even normal matches behavior.

Aside that we have the instagib like Zillion Mode as one of the Weapons Modes, all weapons were balanced and fit to more realism aside give the option to change the rate of fire of the Assault Rifles from Automatic to Single Shot, also you can simply change the ammo of the Sniper's rifles from the default ammo for a long range kind, specially designed for play the Sniper gametype, which is one of the new Virtual Gametypes of the Frontlines.

Also were added several realistic war effects to the battles, which will really make you feel inside a real battlefield. There's 4 kinds of support that you can call when got the Airstrike Support hardpoint. All really random and deadly, here the list:

There's several new stuff on the new version of Frontlines, which you can have a taste right now on the server below:

While you are tasting the new features I'm working on how to add more gametypes to the mod to finally release the Beta server to the public in few weeks. I believe it will be released until the end of march.

Anyone actually playing this? Sounds like heaven, and if there is an active playerbase I would reinstall CoD4.

I'm considering buying CoD4 for PC (I had bought it on 360 when it first came out) just for this mod.

I'm reinstalling CoD 4 just for this

I'll be reinstalling and playing this as long as the servers and playerbase are decent.

Thanks! come to the server and be part of the final tests! :P

and for people that are asking for host the Beta server will be available soon the beta files for download, but only when I "finish" the mod.

I'm updating the server everyday with new features which we are testing, yesterday we started testing the new gametype Survivors, so I can't create a download file with all changes everyday, so please be patience.

Go there play with us (even with higher pings) and wait for the open beta then will be servers close to you for sure.

thanks a lot for the support and enjoy! :D

This sounds very promising. I really enjoy good mods for COD 4 cause it gives a painful slap to IW with their epic MW2 fail.

Whats the IP for the server ?
Does it work with hlsw ?
Will the mod downloaded upon connecting ?

take a look on the post for the IP! :P

and yes, will download and install the mod soon as you connect, in fact it's the only way to get the beta files right now. :D

we have right now 83 maps in our rotation, so I recommend download them first (aside will also dl and install like the mod)

Fantastic work guys. Way to take a great game and take it to the next level!

thank you very much! :P

my ping to the server is 300. Any chance for a server in europe ?

second, have so many maps in rotation make the gameplay very diverse and so away to be boring, so why not? :P

and again, at this stage is the only server in the world with the new version until I release the open beta to anyone can host, sorry.