In this month's update, a look at the the resource gatherers and processors of the Revenant army in Frontline Chaos.

In this month's update, a look at the the resource gatherers and processors of the Revenant army in Frontline Chaos.

One of the primary sources of conflict has always been about the question 'who controls the valuable resources?'. In Frontline Chaos, this is no different, and the highly prized resource in this case is Litenium. Litenium are crystals that grow inside of rocks, and are highly valuable due to the unique combination of known and unknown minerals. They appear all around the globe on the surface, and sometimes in deeper earth layers. Over the years, M-Tec scientists have found a way to extract the usable parts from the crystals with a complex chemical process.

The collection of Litenium is done by heavy duty mining/harvesting vehicles. The gathered resources are then deposited into specialized processing facilities, where they are put through the chemical process to extract the useful minerals. While this process was originally a secret only know to M-Tec, several scientists defected to the Revenant. With the knowledge gained from these defectors, Revenant scientist and engineers were able to create their own ways of processing Litenium. 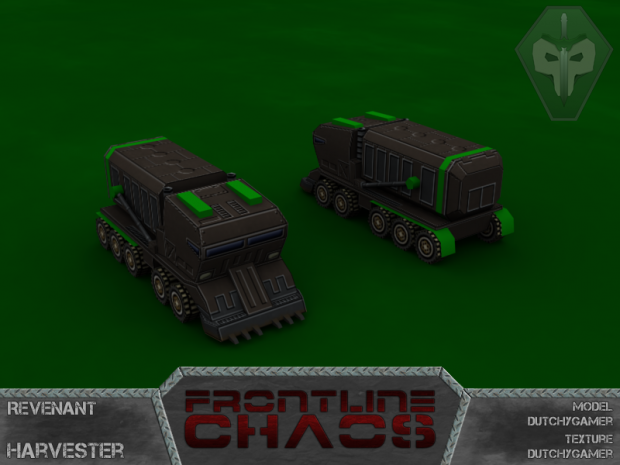 The Revenant Harvester is a large 10 wheeled truck which is used to gather Litenium to fuel Revenant's war efforts. Partly based on stolen harvesting technologies from M-Tec, it is the primary way Revenant commanders can acquire resources on the battlefield. Litenium is gathered through the apparatus on the front of the vehicle, and is deposited into the large tank on the back.

Its wheeled chassis makes it slightly faster and more manoeuvrable then its counterparts, at the cost of having less heavy armour. Despite this, it is still heavier armoured then most battlefield vehicle and can survive a lot more beating then its looks would say. However, Revenant commanders shouldn't become careless because the loss of a Harvester is a large financial blow; especially if it was returning home with a batch of Litenium. 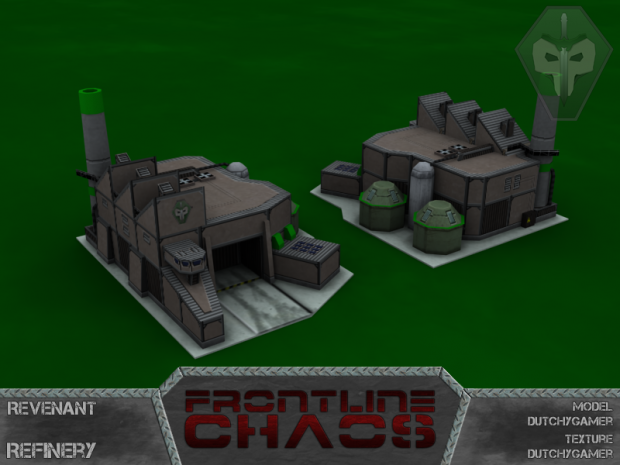 Revenant Refineries are heavy-armoured structures which are used to process raw Litenium into usable resources. They are the drop-off point for Harvesters, which collect Litenium from the surrounding area. Using technology and knowledge based on the work of defected M-Tec scientists, Refineries use a complex chemical process to extract the usable minerals from Litenium.

A Refinery consist of a hanger where Harvesters are unloaded, several tanks and vats containing Litenium and various chemicals, and the main structure where the Litenium is processed. Compared to civilian variants, the acquired resources are most of the times directly used to fuel the local Commander's war effort. While having heavier armour then their civilian counterparts, they should still be protected at any costs. Due to their role they are a primary target of assaults, and rumours are that technology exists to illegally transfer the processed resources to somewhere else then the Commander's coffers.