Get a behind the scenes look on how ZCC was created by Thad David!

This two-year journey of building a video game has been by far the most stressful time of my life, even more so than spending two years in combat as a sniper. I felt my story might help others that may be considering a similar path of building a video game. This story is about my constant battle with all aspects of building, designing, and one day soon launching my videogame, Zombie Company Crusade. This battle continues today as I write this very post. Currently we are beta testing the almost finished game and in the back of my mind are all of the things I have to take care of today, as I set forth to launch my game.

‘Create your trailer, wait first I need to learn how to create a trailer, and learn what makes a good trailer.’
I quickly discovered that when I found the key to a locked door that stood in front of me and opened the door, I knew I would only find two or three more locked doors that I have yet to find the keys to. The best advice I can give you is to get comfortable with being uncomfortable. Stress is your new best friend. Learning to cope with the struggle of the unknown will help you move forward with the things you need to accomplish today. Much like a roller coaster, one morning you will wake up high on life and happy with everything you have done. By lunch you are freaking out because you lost some funding, one of your programmers quit, and your 9-5 job threatened to fire you because you’re “wasting” your time on other things.

Entrepreneur – someone who jumps off of a cliff and builds an airplane on the way down.

Before you think about that one to hard and before you realize you don’t even know how to build an airplane, or even fly one, take a deep breathe and jump. I promise you will land on your feet a better person.

A wise man once explained the journey of entrepreneurship to me as a night drive across the country from New York to California without a map. This can be a scary thing because while night driving you can only see 40 maybe 50 feet ahead of you at a time. Think about how crazy that is, over 2,000 miles to go and all you can see is 50 feet at a time. You know you want to get to California and you also know by driving west you are heading in the right direction. The only problem is you don’t know which turns you will have to make, which roads are closed, icy, or impassible. The thing is, worrying about those obstacles that may happen tomorrow only slow you down today. You can deal with those roads when you get to them.

I am not saying those difficult roads wont be there, quite the opposite actually, they are going to be there and in more numbers than you can possibly imagine! The ones that are going to really test you are the ones you don’t even know exist. The best way to approach those situations is to only worry about what’s in your headlights. You can deal with the other stuff when it comes into view. Besides, how can you possibly prepare to tackle something when you have no idea what you are up against? More importantly, how can you safely drive today’s road while your thinking about tomorrows. Remember, stay within your reach and let your headlights guide you. Relax; it’s going to be a long drive.

I decided the best way to tackle my first blog post is be to tell you who I am, where I am now, and how I got started with building a video game. I am a Marine Recon Scout Sniper. Currently I am uploading my gameZombie Company Crusade to the Apple App Store for testing. This is a very exciting time for me because I have been designing and building this for a few years. On top of building this game I have co-authored on an e-book series to pair up with the mobile game. The Zombie Company Crusade Series Book 1 is complete and will be in e-book stores (for Amazon Kindle, iBooks, and NOOK Books) at the launch of the game. You can check out Parts 1-3 today on Kindle, iBooks, and NOOK. 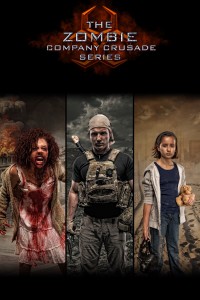 I am writing this blog to show you my journey. Let me also point out how I hate to even say “I” and “My” journey because this entire process would not have been possible without the tons of help I received along the way. It was the people around me that made this possible.

I joined the Marines after high school, pre-9/11. I wanted to take some time off of school and decided to serve my country. After boot camp, while in infantry school in North Carolina, I tried out for Marine Recon School. Over one hundred people showed up for these try outs and two of us were selected. We were dropped into a pre Recon Course where several other people were cycled through to await and continue to try out for training. In the end, six of us were selected to proceed onto Amphibious Reconnaissance School in Virginia. Anyone that might be fact checking this right now should know, ARS (Amphibious Reconnaissance School) has since been terminated. . The Corps decided to close down both BRC (Basic Reconnaissance Course) and ARS, combining them for one school in California. After ARS I was stationed at 1st Recon Battalion where I did two tours overseas. During this time I was fortunate enough to get into and pass Marine Scout Sniper School.

You may be asking yourself, why is this guy bringing any of this up, who cares about his military career? To be honest, I despise talking about my previous military experiences but if you want to know how I built a video game my military background was a major factor. I almost thought this as being the main factor but giving all the credit to that sole life experience seemed silly. While it did get me started, the help I have received along the way has been unbelievable. The way this has all fallen together is unreal and not even comparable to what I did in the military. This has taken a lot of luck and more help than I ever thought I would ask for from my friends any family. 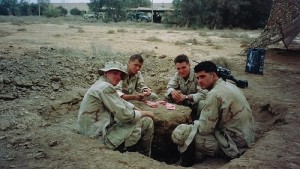 Fast-forward a few years past the military. My dog, Destin, died unexpectedly which ended up being a blessing in disguise. Destin’s death brought me to see my mother randomly before she passed away unexpectedly three nights later. After I woke up from the shock of these crazy few days I dropped everything I was doing, work, school, rugby, life, and took a job providing Anti-Piracy security off the coast of Africa. You might be thinking, as most people have asked me, how did you get into the piracy job? Did you need training? It turns out with my military background all it took was a glance at my DD-214 (Military Background Document) and I was on a boat. In a few weeks I was on a ship off the coast of Africa waving my rifle at pirates as they contemplated trying to board our ship. 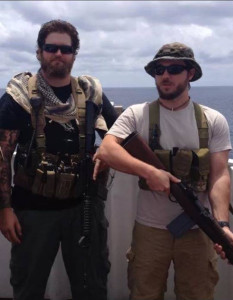 Ship life was a simple eight hours of watch a day on the bridge, (The top part of the ship) and sixteen hours to myself. Twenty-four hours with almost no contact with the outside world. No more Internet, no TV or Facebook (I have never been so keen to Facebook so that wasn’t so bad), all the things that we had grown accustomed to were gone. To think, for me one of the biggest setbacks was thinking about all the people attacking my base in Clash of Clans. HA! On a ship facing a 24-7 threat of a firefight and I was concerned with who was stealing my resources. Not to worry, I had prepared my self for time without attacking. I downloaded the older versions of Warcraft to fulfill my therapeutic gaming. I grew up with these games and man did I love playing them on ship! Building up bases to attack, campaign mode, just a fantastic game that brought me back to my childhood.

After my first port I was able to jump on and check my Clash of Clans base to get a few attacks in. After my first attack I was extremely disappointed when I couldn’t control my troops like I could in Warcraft. It blew my mind that I would have 1 troop left, attacking the completely wrong thing. I lost so many battles because a single troop or group of troops took the wrong direction. I didn’t think much of it at the time because honestly I just loved playing CoC. It’s a great game.

While back on ship in my long days at sea I was able to count my “money”. The fictional money that I didn’t have yet but that I should be getting paid for when I returned home (from working on the ship?). Naturally I started thinking about what I would do with all of my hard earned money I was making and it hit me. Why don’t you create a video game? Build a modern military style game similar to Warcraft and Clash of Clans that included all the things I wanted to see in the game. Once this idea hit me I was off to the races. I was drawing up features, concepts you name it! When I returned home with my amazing idea most people just laughed at me, not taking it seriously at all.

This blog is going to follow my experiences including all the hardships I faced along the way with Zombie Company Crusade and its unexpected twists. I will discuss how I handled and overcame my most fierce obstacles and how in two years I am now sitting on the brink of my test launch day of the greatest thing I have ever accomplished to date. Additionally the ZCC e-book series that goes along with it, which is available now online, may make a few appearances here and there.

Entrepreneurship is a journey, and this story is about mine. Please jump into the comments below with any questions or suggestions you have. I look forward to hearing from you and about your journey.