This year's first Friday Update is about a new gamemode, called "Invasion". It's certainly something new compared to existing Aoe3 gamemodes with both fun and strategically different gameplay. Also, you'll see a screenshot of lovely Saracen economic units. 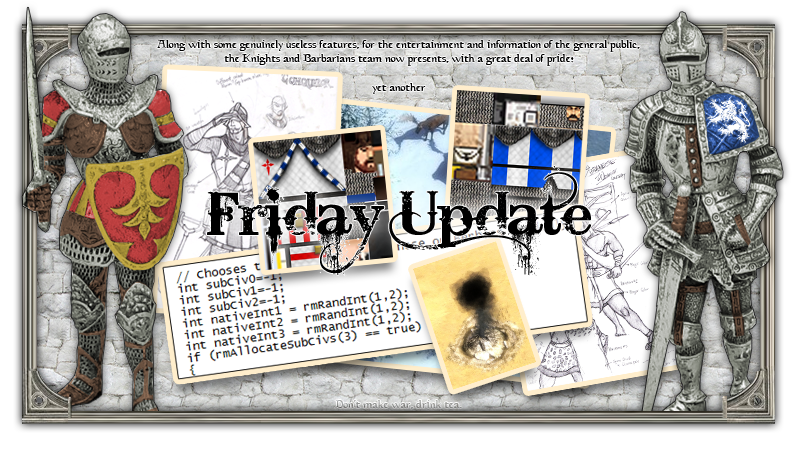 This year's first Friday Update is about a whole new gamemode called "Invasion". Before you wonder, yes, we revealed the name in an earlier Friday Update but we said nothing else really. The gamemode itself was coded months ago so now it's finally time for you to know about it too!

First of all, the original idea of Invasion was made by The Dude and everyone in the team was quite enthusiastic about it. During that time we weren't really focusing on gamemodes though and stayed as an idea for some time. Only once we got the Diplomacy gamemode and weather conditions coded, we had time to think about Invasion as well and I think it turned out great.

Now that you know about the history, we go to the features. Invasion is pretty much like Deathmatch: you have several bonuses already at start and a simple goal, destroy enemy team's Castle. Yes, Invasion will only be for team games, but it will work for all amounts of players [2-8]. But it's not that simple, Invasion will appear only in few maps where two land areas are separated by water. The only map with this setting in Prologue is Bosphorus, although in later versions you can play it on Danish Straits as well. And don't worry, Invasion gamemode has a separate map version of it, just like Large or Regicide versions.

Obviously, teams are placed on different sides of map with their own land mass. The fun part comes here, you share all resources with your team! Basically, each resource you gather is for the whole team to use although all the resources are shared equally between players in team. This opens a whole new level of strategy in Aoe3 team games: will each player gather each resource or will some player focus on only one resource?

Anyway, to the next feature. As I said, you get different bonuses at start. Firstly, every player starts at Age V, without any other techs researched. This naturally means European civilizations cannot Revolt in Invasion. Secondly, to speed up the game, every tech researches twice as fast. Thirdly, you have the maximum population of 200 already achieved at start so you don't need to build Houses at all. Plus you get 2000 of each resource (which are for every player in team to use) and a starting army.

Instead of giving each civ a bunch of units, it's mostly random. You can get Men-at-Arms, Spearmen, Halberdiers, Archers, Crossbowmen, Skirmishers, Light Cavalry, Knights, Cavalry Archers and/or Sappers or possibly none of those. It all depends on civ's unit roster, you can't get units that are either disabled for that civ (for example Byzantines can't get Light Cavalry) or if the civ has an UU for that unit type, you can't get them either. This leads to another thing, the possibility for each unit is calculated by dividing 100 with number of possible units. For Byzantines, this means 20% chance to get an unit, while it's 16% for Turks and only 14% for Italians, Crusaders and Saracens. If you are lucky, you can get more units with smaller probability or at least make sure you'll get something. Just hope you don't get none!

I already mentioned the goal of Invasion, you need to destroy the enemy Castle located on other side of the map. Of course you can win the traditional way to destroy all your enemies too but that's not really the purpose of Invasion, isn't it? The Castles itself are owned by a random player in both your team and enemy team. It doesn't matter much who owns it though, as once the Castle is destroyed, the whole team loses automatically. It's not so simple as building a Dock and rushing to enemy Castle though, as building Docks is somewhat different too. In Invasion maps, Docks can be placed only in special sockets which are placed on the coast. Each player is given their own socket though, but you might want to think if to play defensively.

Invasion doesn't work when playing against AI as it doesn't know how to transport units properly, I'm sure you all know that. But, it should be fairly fun and something different to play in online, definitely if you enjoy quick paced military-focused games!

To make up for the tedious text part, here's a screenshot of Saracen economic units, Slave, Fellah and House Wagon. Well, House Wagon isn't exactly a economic unit but actually a moveable building. I hope you like them though! 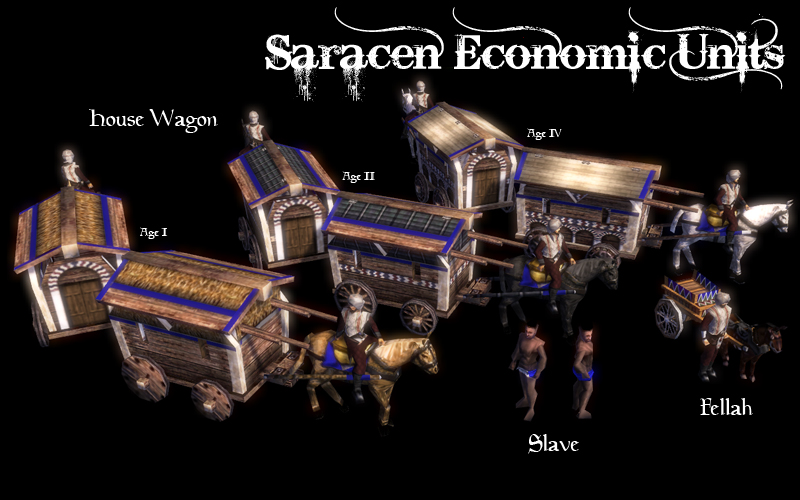 This week's quote comes from peugeot407 who is telling an absolute truth about Aoe3 modding:

peugeot407 wrote: I'm not sure if I'm very glad I said I would rewrite the animfiles to cater for two different unitsets. It's almost more tedious than coding HC cards... [yawns out loud]

not sure if I like that the total strengh of starting units is random, might lead to people complaining when they loose("I just lost because I had no units"). I really like most of the other ideas tho, sharing res, Dock sockets, looking forward to it!

Thanks! Well, the starting units don't really matter that much, as you have those 2000 bonus starting resources to train them. I actually think having a stronger navy and defensive buildings at start are more important than units.