This is an article containing information regarding our new missile and torpedo visual special effects created for us by FriendlyFire.

FriendlyFire joined our team quite a while ago and has contributed much to the development team with his visual effect making expertise. He has single-handedly made the game so much more beautiful than many of us could have imagined possible. As such, he has been working on our missile/torpedo effects to get them as close to canon as possible as well as providing his own artistic flare. I have to say that I'm utterly thrilled with the results.

Here's the development process and information about each class of ammunition that will be in the game: 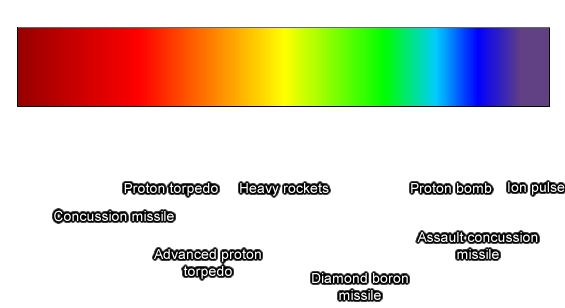 Weapons are listed from weakest to strongest as per explosive force. The colour of the weapon is defined by its position in the spectrum. Remember that this classification does not consider items such as refire rate, speed, volume, etc.

Proton torpedo
Fighter-to-fighter ordinance
The proton torpedo has a slightly orange trail with a red/purple glow and a very small white core. It is a step up from the concussion missile in terms of damage and manoeuvrability. It is fairly dangerous to any and all strike crafts, easily destroying unshielded opponents in one or two passes. While not as compact and cheap as the concussion missile, its much higher explosive power more than makes up for it.

Heavy rocket
Bomber-to-capital ordinance
The heavy rocket is defined by a bright yellow core followed by a solid yellow trail. Its power not only comes from its rather heavy payload, but also from its extremely high refire rate and surprising compactness. While unguided, the heavy rockets' speed allows the user to avoid getting too close to its target before firing. It is a preferred choice of crack bomber pilots with the skills to make every shot count.

Diamond boron missile
Capital-to-fighter ordinance
Capital-to-capital ordinance
The diamond boron missile is easily recognized from its extremely bright green triple core and its very long dark green trails. Its explosive power is of apocalyptic standards; anything in the huge area of effect is nearly instantly vapourized. Its prohibitive cost, poor manoeuvrability and slow refire rate do not deter its fierce supporters, who consider the diamond boron missile the ultimate anti-fighter weapon that also is flexible enough to be used against capital ships with surprising potency.

Proton bomb
Bomber-to-capital ordinance
The proton bomb is a bright blue glowing sphere with a darker blue glow. Even more potent than the heavy rocket, the proton bomb is a far riskier weapon to use. With its slow speed, low refire rate and high cargo usage, any pilot willing to use it must be able to hit on every single shot. If even one of those bombs impacts an enemy capital, however, the punitively high damage will be worth the expense.

Assault concussion missile
Capital-to-capital ordinance
The assault concussion missile is a large, five-engine-powered beast recognizable by its flickering blue engine glows and dark blue trail. It is the most effective capital-to-capital ordinance available, and it shows. The devastating power of the missile is only heightened by its very high range and large blast radius. While a fighter will run in circles around it, its targeting systems are well suited to assault other capital ships with deadly efficiency.

Ion pulse
Fighter-to-fighter ordinance
Fighter-to-capital ordinance
The ion pulse's main characteristic is its "wave-like" appearance and its short misty trail, both of which are of a deep purple. While it does absolutely no permanent damage to a ship, the ion pulse's main purpose is disabling. With just a single shot, it can render inoperative most fighters, taking down shields, weapons and engines without discrepancy. It is also very effective against capital ships, where its good range make it deadly without exposing the pilot to defencive fire.


Now, to get you to the eye candy. This is the first presentation of the concussion missiles, proton torpedoes, heavy rocket and proton bomb. We're still in the process of making the missile models for the diamond boron missile and assault concussion missile but expect a video about those soon!

You finally decided to make torpedos as enchanted versions of rockets, not that bad ;).Following the canon is good, but torpedos always associate with smth what is supposed to be slow and powerful....Like that moment in vanilla Freelancer where 2 Rheidan fighters use their Torpeeedos to destroy bigger ship...Also i want to suggest you to make icon's backround of these missiles with the colour of their trails, so players won't have to read zillions of manuals and the game will be newbie-friendly (:
And the last, but not least.YOU'RE GUYS ARE AWESOME!!!!!LIVE LONG!!!!!

Sushi!!!! When are you going to finally release the mod? My anticipation grows even more unbearable with each passing post of pretty pictures and wonderful changes!

Just promise me there will be moar sushi stars and i will shurely download this masterpiece :D