Finally it's here, version 1.0. What you'll get in this first playable release:

It's also perfectly compatible to the Nexus Skirmisher, so you can create your own skirmish battles for it (but don't forget to set "freespace" as mission type!). 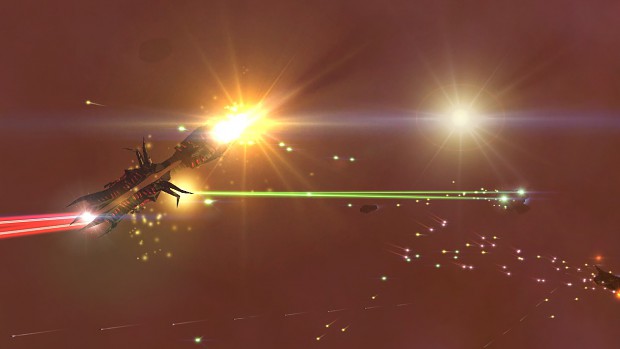 Please keep in mind, that this is still very much a work-in-progress. Especially balancing and fighter or bomber handling need to be worked on more. There is also a whole lot of iconic Freespace ships missing, like the big destroyers obviously, but also civilian transports and such still need to be added to open the doors for some interesting mission design in the later stages.

In the meantime, Freespace: Evolution is now on Twitter. To receive all the latest updates, make sure to follow the tweet! The site on moddb will also be regularly updated, of course, although that'll be reserved for bigger news worthy of their own article.

Ah, crap... sorry, I had to reupload the mod cause of a small issue with the installer (didn't install the Skirmisher support files properly). Seems my timing was perfect, since the upload finished just after the old one got authorized - and now the newly upped file is awaiting authorization yet AGAIN :(

Big sorry to all of you seeing this post, but not being able to download the damn thing.

Download is working now, so get it while it's hot!

No worries man, it's worth waiting for. Guess I downloaded right before they killed the link. Really solid first release. Like I mentioned there was that one mission bug, but that's not a big problem. Overall it's extremely polished for an initial launch.

Looks very interesting. Keep it up

Oh cool, gonna reinstall Nexus and get this soon. :)

Hi, i followed your Mod-Creation for a Year now.

Im happy to see a first Version and its realy impressive.
Is there a special Site to give some feedbacks ?

I operate a forum dedicated to Nexus and Nexus modding, which has a Freespace-thread. That's probably the best place to give detailed feedback:
Arparso.de

The mod doesn't do anything to your serial, so this is definitely not a mod-related issue. I suspect you're using Vista or Windows 7 with UAC enabled? This might cause the serial to be stored at the wrong location in your registry under some circumstances. Luckily you can repair that yourself:

1. Open up regedit and navigate to the correct location in your registry, according to the instructions in this forum thread: Arparso.de

2. There should be an empty field named "Misc_AuthKey" - just enter your serial as new value and it should work (if the field isn't there, create a new one with that name)

If you've bought the Steam version of Nexus, you might not even know your serial. Try searching the "Misc_AuthKey" in regedit then and it should eventually find the location, where your serial has been saved to. Then copy & paste that serial to the correct location.

Thanks for help. I apreciate it. I do use win 7.

Any chance of throwing up a hamachi MP server ?