The radar is completed. Taking questions. And what's next?

First of all, let me say thanks again for all the support
and feed back. I do read the comments
you guys leave, and I’ll spend some time addressing them in this post.

Radar
The radar is finally finished. Each radar image is stored in
a separate binary file, with each line encoded in every 4 bytes. I also added
the ability to load specific levels. All the levels are contained within one
map, stacked on top of each other, because the map loading time in HL2 is too
long to be doing for every single level. Initially, this meant that you would
have to start at the first level and play through all of them. And if it you
died it was back to the beginning. Initially I tried to add an additional
parameter to the ‘map’ command, but unfortunately it’s closed source. Next I
tried creating a ConCommand to achieve this, but ConCommands don’t seem to
execute unless a map is loaded. I finally settled on a ConVar (‘load_mission’)
with a callback function to set everything in motion. Finally, I’ve created 10 radar
images for the 10 levels completed so far. Enough with the boring technical
stuff though, here’s a picture. 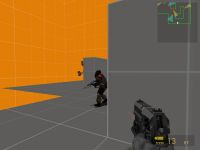 A number of you have commented on the aesthetics. I’m trying
to hammer out a working version of the mod first, and then hopefully I can go
back and beautify things. Neither mapping nor art is my forte, so any
suggestions on how to improve things are appreciated. It may take some time to
get around to addressing them, but your comments are not falling on deaf ears.

Others have also offered to help out. As much as I desperately
need a few extra hands, I don’t have enough time right now to manage a team. I
appreciate your offers, but I can’t take anyone on right now. Keep checking
here for updates though, as things are subject to change.

To those offering to play test the game, I’m not ready yet. When I am I’ll let you know. I want to iron out the last few features before I set anybody loose on it. Stay posted, I’ll let you know when you’re
needed.

What’s Next?
In addition to about a billion bugs, there are also a couple
of features I’m working on. First, knocking on walls to attract guards
attention. I’m not an artist/modeler/animator, so a custom command and
animation seems unlikely. Instead, attacking a wall with the knife will serve
the same function. It’s not a perfect solution, but it should work.

The second major feature I’m considering is the result of a problem.
The limited vision range of enemy guards not only makes them seem stupid, it
also makes the game somewhat easy. One solution is to increase the vision range
of the guards, but this goes against the source material. It also makes the
radar look ugly, because the view cones cover most of the radar. The other
solution is to decrease the player’s vision by moving to a top-down third
person perspective. I’ve found some decent Snake models at FPS Banana. The only
problem is that they’re all for Counter-Strike: Source, so I’m investigating
the kind of hoops I’ll have to jump through to make them work. Hopefully it’s
nothing too painful.

before using skins from fpsbanana in your mod could you please do the original author's a favor and ask permission first?(or credit them at least)

When I lock down what skins will be released, I will absolutely give credit to their creators. For those who see a skin they like, contact me and I'll let you know who did it.