Ever since early in its history, Althas has been a land shaken by conflicts. In the early days, these conflicts pitted the Anointed Kingdoms of Men against the dark and demonic forces that threatened them... 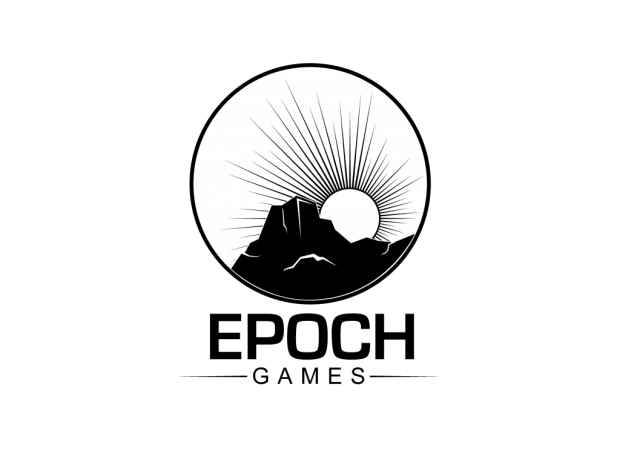 At Epoch Games, we are dedicated to quality and ambition in all aspects of our project. As most of you know, many of us are veterans from the MERP team and so the scale and ambition of our work should come as no surprise to you. Lays of Althas: Sundered Order, our current project, is an open world fantasy roleplaying game set in a universe of our own creation. In the coming weeks, we will be walking you through a gradual introduction of the people, places, history, and events of this new world. 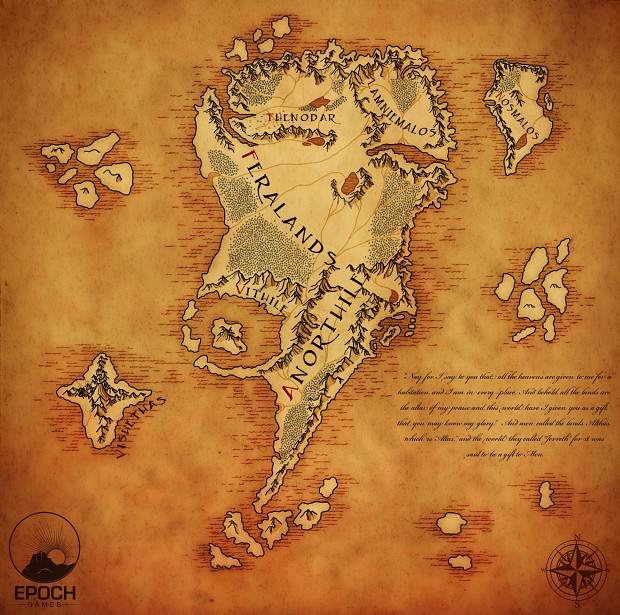 (nah, its ok, I know you found our site awhile back)

There isn't much that I haven't already mentioned on the map image or that I already knew, so the only new thing here was the website which did look better. Also I guess I should mention I was super excited to see Epoch Games in my updates list. Yes I know I didn't check the moddb page directly to find these updates, although I checked Epoch Games directly now and found your reply by chance.

Looks great!When will we see the first screenshots? How is the engine compared to Skyrim's?

The engine is vastly superior in almost every respect. Screenshots will come in due time. The first will most likely be screens demonstrating assets in engine such as new foliage, architecture, or armor.

Now that you don't have copyright to worry about, what do you think about starting a fundraiser for faster development? For instance, if you need models or voice actors, you could start a fundraiser to get the money for freelance professionals.

You might also remember that a year ago I suggested using a cheap Mocap software called IpiSoft with a Kinect (or 2 Kinects or 4 PSEyes). Of course, a fundraiser back then would have been downright illegal but now you are free and with the amount of fans you have, gathering funds would not be much of a problem.

Finally, why not go commercial with this project, you've got the talent for sure!

We have indeed been looking at taking donations for such things, there is a donate button on our blog site if you feel inclined ;)
We are not expecting to get any significant money out of the donations, just something to help with hosting our websites and things.
But if we could afford a setup like that then we'd seriously consider it however it would come to nearly $600 which is vastly out of our current budget :P

600$ wouldn't be terribly hard to gather considering the amount of fans you have, you just need to advertise what you need the money for. For instance, if you need a freelance 3D modeler to make a difficult model, you could make a call to arms on the front page. In any case, since you have a donate button I will be making a donation sometime during the following week between 25$ or 50$ - as much as the salaries of my country permits it.

Keep in mind that I am not pushing anything, it is merely a suggestion. Also, if your time permits it, I would also suggest coming to a consensus within your dev team and then relay your stance about this on your blog or your ModDB page. Such decisions should be made wisely.

Don't worry, we have thought everything like this through very carefully. We are still in early days, more 'features' like jobs posts will be arriving soon.
Your donation will be much appreciated as well :)

The ideas have been running round for months, but its only been for the last two that we've had anything solid in case MERP went down, then in the last 3 weeks we've had to cancel MERP and this really picked up.

So, should we expect this to put roughly the same amount of stress on a PC as Crysis 3, or are you guys ramping up the amazingness factor even farther than that?

Where we can, we will be keeping the minimum requirements as low as humanly possible. On the other hand, we want to push the graphics as far as the engine will allow... so hopefully any machine that can run Crysis 3 well, will suffer.
Like CryTek's mentality, we want this to be futureproofed.

At least you have a 6970 i only have an 6870:( well when AMD releases their 9000 series (I think it will be called R9 or something like that) I will need to upgrade if I want to play Star Citizen, Wild Hunt, Lays of Althas: Sundered Order and a few other games that will very likely kill a 6870.

You guys going to do Alpha/Beta releases or just in house testing?

If you do an alpha/beta, any unofficial guestimate on a guestimated estimation of an ETA? xD

(Ik you can't really throw out anything too accurate right now since it's just starting out. I just want a better idea of the scope of the project :P )

We couldn't tell you if we wanted to, we just have no idea. We could be ready for a sub-release in 6 months, or it could be 4 years. I would love it to be the former though.

The writing looks like it could use work. It's good to reread it outloud or have someone else do so in order to find mistakes that may sound weird. I know I sound like a highschool english teacher, but this is just my opinion(and advice)

Yeah, that probably happened with the last second editing. I spotted it too after it went live. Oh well, what are you gonna do?

I can't decide if I'm ridiculously enthused. or upset. XD

SOOOOOOOOOO Stoked to see an entire RPG done by you guys, but at the same time disappointed there wasn't some way to beat the living **** out of WB and proceed to fix that bug :S

Great to see something new from you!

On what engine is this game being developped ? Are we going to be able to download and install it without having any other game ?

Lays of Althas will be on Cryengine 3 as an independent game.

I hope there's gonna be some barbarian raiders or something

Plains!! Bordered by mountains!! Yes, finally a game with great plains :) Are they going to be grassy or bare and inhospitable (like an American desert)? O and I like the story too so far xD

There will be a range of terrains, mostly grassy I believe.

Best wishes guys!just a few questions if you dont mind...
It's a new engine,ok,but how close to TES melee/range/magic mechanics is it going to be?Are you considering similar spells?
What about guilds/factions/economy/crafting?Are you taking a similar approach?
Finally,will other modders be able to create their own add-ons to LoA?something like CS/Blender?
Thanks in advance,I hope I'm not asking too much too soon.
I will hapilly donate,modders need support and WB etc need a lesson.

1)The combat is going to be almost completely different to Skyrim, we'd rather have combat be interesting. Magic is going to be mostly limited, with its use being a rarity and fairly minimal for the player.
2)There will be factions, guilds, crafting and an in-depth yet enjoyable economy, better than Skyrim, but nothing like EVE online.
3)We would love to support a modding community of our own, there will certainly be the capacity for people to add their own quests, NPCs and whatever else.

Will the combat be more like mount and blade or skyrim or will it be more like the witcher 2 or assassin's creed. since I personally prefer combat that's fast paced and fells "natural" like in the witcher 2 to the combat that mount and blade has.
I never played EVE so I have just about no idea what the economy is like in that game. I personally think the player driven economy of star citizen sounds awesome but at the same time I am rather certain your not making an multiplayer game. I don't mind not being able to play with random people over the internet since I'm sort of antisocial as it is already. (I only went outside to society ONCE this summer, and only because I had to go to the orthodontist) however I it would be neat if I could at least play over lan with my brother. although even without lan support this game will still be AWESOME and I really can't wait:D

use all the assets done until now :D