Here are some ideas for the future of Lingua Quest, our educational language game.

In the prototype, we implemented turn-based cinematic fighting. You fight off enemies by translating words. Although, we aren't pleased with how fighting is done at the moment, so it is open for dramatic changes. Here are some of the ideas we are tossing about.

We kind of imagine the words to be "magical spells" which defeat enemies. Of course, these "spells" are in reality actual words from real languages. We want to make a fighting system that is both fun and educational. As the player gets better at the language of choice, the easier battle gets. In other words, there will be no traditional grinding, but rather a lot of words to remember. 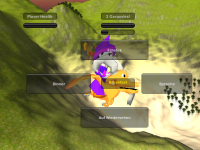 Words are not enough to learn a language, however. Also, simply learning the words won't make you pronounce them correctly. We should have voice playback on the words you choose. Vocabulary, beyond the first 100 words, is best learnt in context. Thus, it is important to also have making simple sentences as a part of the fighting system. The battle systems primary goals are the following:

The enemies should be bound by the same rules as the player. This is a flaw in the current prototype (keep in mind we made it from scratch in less than a week!) If the enemies behave the same way as the player, you can learn from their mistakes, or take from their example. If you have played Monkey Island 4, the monkey combat part, you know how successfully this mechanic works; besides, it is how we as human beings learnt our native languages.

In the prototype; enemies automatically attack you after a given amount of time. Chrono Trigger was an inspiration to us. This prevents the player from looking up words while playing and forces the player to choose a word without hesitation. Language is reflex! Battles should be fast-paced.

We need to make a large, living world to explore. There must be many things to do, and places to travel. There should be a story that drives you forward. It is the free-roaming part of the game that teach the words to use in battle. We need to make puzzles and NPC-s for the player to interact with. Things such as ordering pizzas, and word games, like scrabble, which you can play with them. But I'm getting ahead of myself.

I don't think we can resist to make a puzzle inspired by this one:

(of course.. swap the language Elvish with a language you are learning ;)

As I mentioned in our first news post, I believe there is a lot of potential in educational games. Computer games do a good job in rewarding the player and have them continue playing, even if the game doesn't actually help out in real life. The same mechanics should work well in educational games, if we make an environment exciting and consistent enough. I want to make both traditional fun games, and games that teach meaningful real world skills. 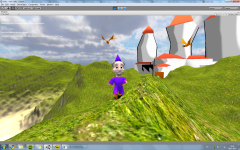 Many of my friends still play Pokémon games. There must to be something truly ingenious about them. One thing I find very interesting is how they introduce you to new monsters. They have a picture of it, and the name. You can probably tell where I am going with this. Collecting words by seeing the object physically, or in practice in a sentence, will help the player memorize. There should also be a learning curve. Just as in most RPG-s, the enemies should increase in level as you progress in the game, and with them the complexity of the words, verbs and sentences you use to fight them with. But the player should still have the ability to go back to the Level 1 playing field as the game progresses by back-tracking, in case he has been away from the game over a period of time.

Those who have imported Japanese games to play them before their western release dates know how important language (and language guides) can be to solve certain puzzles. In Zelda: Phantom Hourglass, important words in dialogues are coloured in red, which makes it easier to look-up the words. When speaking to NPC-s who speak the language you wish to learn, we could use the same technique, and with a simple mouse-over, quickly translate the difficult words into your native language.

We can't make the game alone. Personally, I only speak two languages fluently, English and Norwegian, so I think we'll need a lot of help from the community to get this game right. Hopefully we can eventually make back-end tools to let people who are interested in playing and developing help us out in crafting their cultures into the game and creating a truly amazing experience. The game should become a great resource for anyone who is learning languages. Let's make a game that have people say "Viva la vida"! Learning languages doesn't need to be painful! You learn a lot faster when you have fun while learning.

We think Lingua Quest will be an interesting experiment, and hope there will be people who are interesting in playing a game like this. If you have any feedback or ideas, please let us know in a comment bellow.

Hello again!
Awesome work, guys i really start to like this, and what is the best is that you don't take critic personally. Love the big buttons now, should be alot easier to click them, especially if you intend to make it for younger players.
Few questions:
1) How do you intend to set up difficulty level? Is it setup manually or as game progresses? To keep child's interest, they have to have fun and upperhand over the game most of time. For adults not to lose interest, they have to have some kind of competition.
2) do you intend to use scoreboard? From my experience with Flash games, people just loves to see their names on top of boards
3) Voice will be a nice addition IMO. For an extra idea i would also recommend user input as an extra gameplay. Instead of clicking, they could be typing too against the time, for keyboard skills. Don't mind that, if game is not intended for learning speed-typing
4) Since it's turn based. Depending on Level of difficulty, will monsters also make mistakes, thus missing to hit the player? Imagine monster doing angry roar and animation when misses, that would make kids laugh ^^
5) while flying on a dragon, a simple script to shake camera and some overlay image fading in and out over screen, when player gets hit, should add a thrill to a player and maybe add more interest.
6) Your idea's third point - making sentences. How is that going to be implemented?
What i would do is simply is: Depending on level of difficulty add few buttons randomly on a screen in a single line or a circle, and let player press them in correct one by one, if wrong button is pressed, screen shakes, player gets hit, button remains. If correct, button is greyed or colored out.

Phew i think that is enough for now. I know i am a bugger, lol

Can't wait to see more and get my hands on next demo
Wish you all the best in competition, fingers crossed :)

Hi there,
Nice to hear from you ;) You have made some good questions. Let me answer them.
1) We want to adjust the difficulty level as the game progresses. Imagine this - in the first dungeon there are lots of enemies to practice on, but if you feel you are ready, you can go right to the boss of that dungeon and save the princess (or whatever). This way, people who already know a bit of the language can progress faster to a level that challenges them - Pokèmon style.
2) I'm not sure how we can implement a scoreboard as we imagine the game, as it is an RPG, but we will definitely consider it.
3) My twin brother, who is the graphical artist for the game, has been demanding keyboard input to talk to characters and to do certain puzzles. I'm a little hesitant, as to me it feels old-fashioned (Sierra era of Adventure games), and I don't want to code "chat-bots"... But I guess to learn a language you should also learn how to spell, so we'll include it somehow.
4) Yes, we will have that for sure ;) . Enemies should be able to do the same mistakes as you do, and own themselves at times
5) Visual user feedback is lacking in the prototype. We need to work more on animations, particle effects when you cast magical spells at enemies etc..
6) We thought of doing it like that. We consider having several options when you are fighting. Attack (Translate words) Create Protective Shield/Defend (Conjugate verbs) Destroy Protective Shield of the enemy (Create sentence)

We didn't even get nominated in the competition, but looking at the finalists I can understand why :)

Hopefully there will be more competitions. Or we can make enough money on Lingua Quest to buy Unity Pro. heh.

Totally love point 6), that's original!
you have my fingers crossed for you, guys! :)