In this post we talk about the enemies that the player will face in the game's first level. Dancing Adonis, mythical beasts and the god of order himself.

Posted by SebastianGioseffi on Aug 6th, 2013

After doing some research about Apollo we ended with the feeling that he was one of the good guys. He was the god of light, healing, truth, music, harmony. That is almost as good as it gets. But we had decided that our game was going to be about taking down the old gods. About humans (and some demi gods, and some other quasi humans, and some not some humans, and some chickens) breaking free from the tyranny of the whimsical and stagnant Olympians that would not let mankind grow. So it was our job to portray Apollo as the enemy. We could have had the mob simply destroy Apollo's perfect world of poetry and beauty ... and there will some of that ... but instead we decided to focus on the darker side of the god. Sure, harmony sounds very nice and having some order is pretty useful but what if there is too much order?

With that in mind we set out to design the enemies that would populate the level. The first ones we though off were the ones we ended up calling the Rhythmic Adonis: beautiful, athletic giants that would move and strike down people following the music's rhythm. They seemed to embody several of Apollo's aspects (music, beauty, harmony) and looked perfect to serve as guards, patrolling the streets of the city. I always pictured them simply like really big men, dressed with togas and showing off muscles, but when Roque started sketching them, he had an amazing idea: make them out of clay. And by this I do not mean that we are going to star doing claymation (although that would be awesome ... I'll see if I can persuade Roque to start taking some pottery lessons), no the Adonis will still be made out of pixels but they will be portrayed as sort of automatons made out of clay. Shiny, beautiful, clay giants. I already love them. 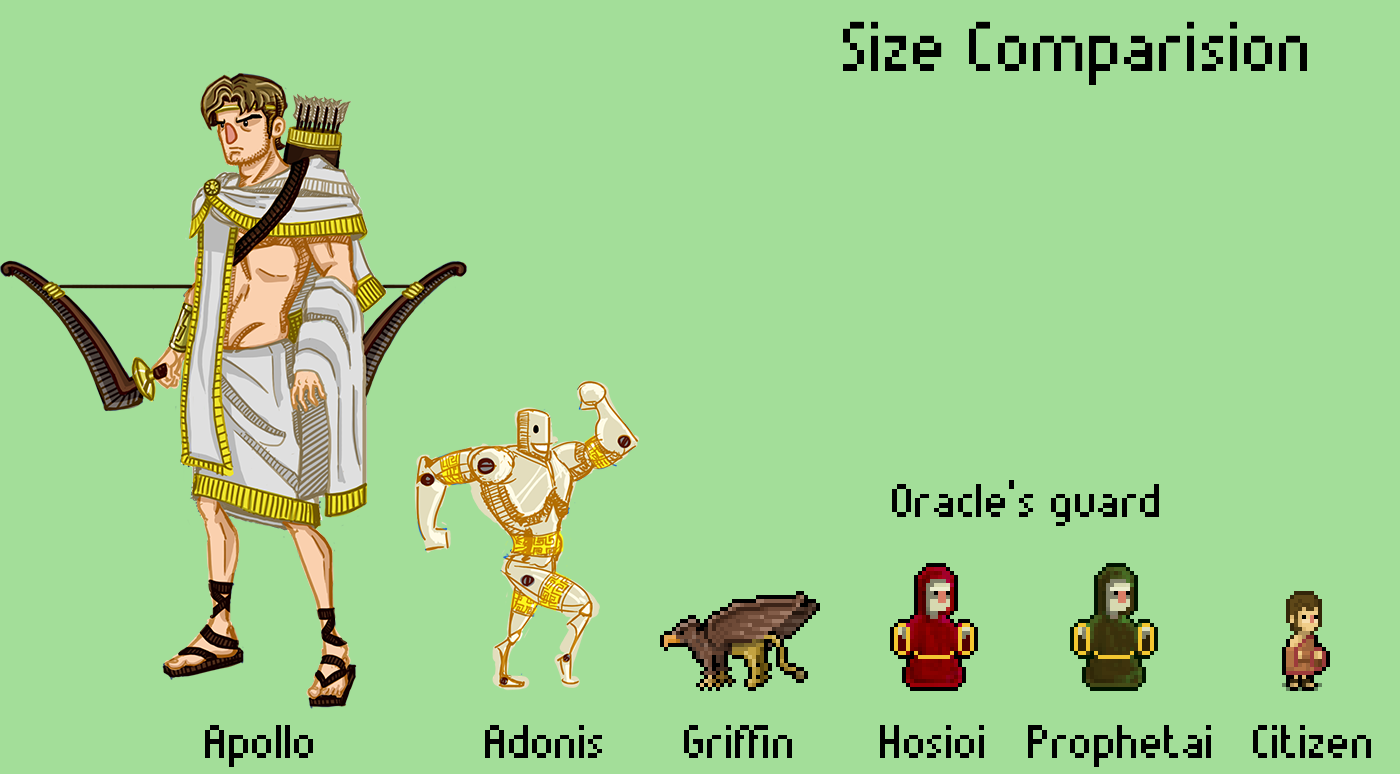 Next, were the griffins. They were one of the creatures associated with Apollo so we said: Let there be griffins! This time we thought not make out of clay (nor metal). Just a good old fashioned griffon. Who does not like a griffon? You? Then you are in luck, my friend, because you will have the chance to beat the hell out of those griffins in Okhlos. The griffins will try to snatch people from the mob and drag the away to turn them into griffin food. If you want to save them, you will have to chase them and give them a taste of mob fury before it is too late.

There are lots of other things in the level but I this is getting too long and I want to go back to the code, so I will just skip to good part, the boss battle. The mighty clash between the mob and Apollo himself. The ultimate struggle between order and chaos. And so on. This is the moment where the god of prophecy and poetry will show he is not such a nice guy after all. Besides being the god of medicine he is also the god of plague, so he will unleash his pestilent powers upon the mob. He may or may not throw cats at the mob (arrows for sure, but maybe, only maybe, just a tiny little cat once a while?). Apollo will also try to organize your mob a little bit ... but in a very procrustean way so speak. A grim perspective for the angry Greeks of the mob for sure. However, there is something the player can use in his or her advantage, Apollo's obsessive compulsive disorder. If something near his temple gets a little messy during the fight, he will go and tidy everything up before carrying on with the fighting. A great chance for the mob to strike with its mobly power.

And that is it for now. As I said, this just but a glimpse of how the first level in the game is going to be (or at least how it is right now in a pseudo prototipical form) and there will be more to come in the future. Until then ... Power to the people!

It seems like you guys really have go(o)d ideas. I'm waiting to see effects of your work. Keep it up!

Adonis looks so awesome, fighting Apollo will sure be fun!