Post news RSS Field of Heroes getting a big makeover

Half a year after the initial prototype release of the online soccer MOBA "Field of Heroes," development is underway to give the game a major facelift!

Here is a video of the facelift in the recent past without the big art makeover:

Here is a list of changes being made to the game:

One of the most exciting features coming is the ability to stream the game over your Twitch channel and have your audience actually participate through cheers and more! The integration is already in place but does nothing yet since most of the focus is on other things right now.

I made the painful decision to switch from Photon Unity Networking (cloud-based) to Bolt Networking (pure client-server) and rebuilt the network infrastructure of the game. I did it for these reasons:

Performance
Using PUN when I tested with two machines on my LAN, there was always a noticeable delay between the time I moved my character and the time it moved on my other machine. That delay is equivalent to the time it takes for the state packets to travel over the Photon relay with dejitter enabled (at least I think it was enabled because when I turned off dejitter in Bolt, my packets no longer arrived in order). I later determined the delay to be 150ms, and that was round-trip back to my home network. With Bolt the delay was almost non-existent after turning off dejitter.

Authority
Even if performance weren't an issue, having a floating "master client" always was. With PUN one of the players; usually the one who launched the game, is the "authority" until they leave and someone else takes over. In the final product, there must be a dedicated server running on a server farm under Gamieon's control to minimize cheating and manage player stats. Plus with a single dedicated server I don't need all the clients to have enough data to prepare to take over that role should the "master client" leave. It's complicated to support that in code. But don't let that deter you from using PUN; I find it to be great for prototyping. I was able to successfully whip up a completely playable two-field prototype in under three months with it. No players had to go through the trouble of opening firewall ports to start and host a game like they do with pure client-server either.

For the first time ever I'm commissioning someone to lead the design of a game I program. Highsight (you may be familiar with his Indie Insights show on Twitch.tv ) is identifying all the current issues with the game and proposing ways to make it more fun, balanced, challenging and immersive.

In the current release, each character has only a primary attack and an ability. In the next release each character will get three abilities including an ultimate which is charged by collecting power points throughout the playfield. Here is one example: Dodger (the ranger) using a Charge Shot power kick:

Of course there's also the art. I commissioned Meta3D studios to do ALL custom art for the game. We see eye to eye on the need for it and a style that we think will fit the game well. Here's a screenshot of the current Dodger animation model running. 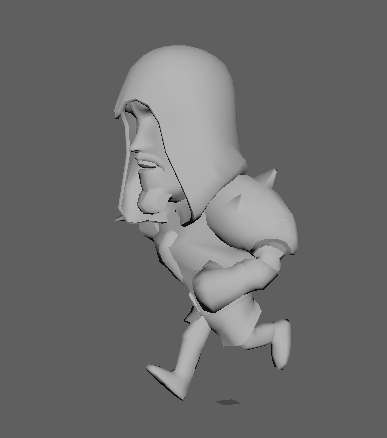 When can I play it?

If you want to play the very latest prototype, you won't find it on itch.io. You'll need to add @Highsight to your Twitter follower list and listen for announcements when we do play test streams. You can also just drop me a message and I'll be happy to give you a copy and link you to our Discord channel.

But as for the release that includes the big art makeover, we don't have a date yet. So you'll have to stay tuned for news updates!