The unfortunate state of the game, and why I shouldn't announce release dates.

I love when a plan comes together... unfortunately, that isn't what is happening with Greedy Station and it's "before the end of the year" release plan.

After more than two months of struggling with performance issues and a jittery frame rate on the XBOX 360, I decided to bite the bullet and re-write a significant portion of my game engine to improve performance... but at the cost of having to invest a significant amount of time on things that don't bring the game closer to release. The result being, Greedy Station isn’t going to make it out this year.

It’s not all bad news of course. While I have had to change some of the underlining mechanics of the game, doing so has come with a number of advantages (and disadvantages). Not only does the game run at a more consistent frame rate (though I might still run into slow down when I have too much on screen at any one time), everything loads a good bit faster!

Generating a random galaxy at 38x48 sectors in the old implementation took upwards of a minuet on the XBOX (and a little more than half that on the PC); and now I generate a galaxy 100x80 sectors in half that time! And when I pushed the edges of how large a galaxy I could make (5000x5000), drawing the screen didn’t take any longer than it did in a smaller galaxy (where as in the old implementation, doubling the galaxy size decreased performance by about 10%). This means I can make galaxies that are much larger, populated with even more stuff, and do it with a much smaller loading time impact. 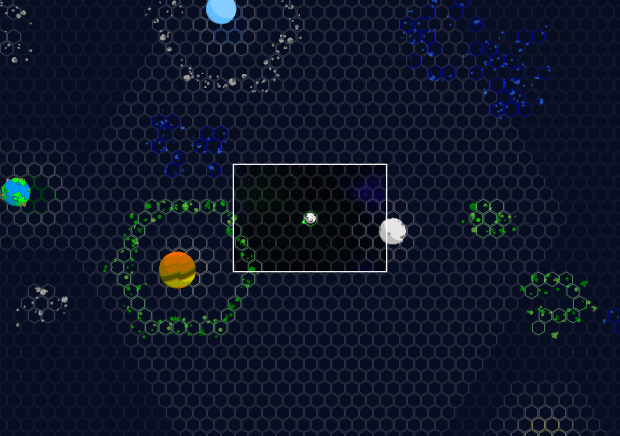 But let’s go back to the bad news…
For those of you who want a new release date, I am refusing to give one. Normally, at least elsewhere within the game industry, this is a bad sign (at least I can't think of a time when an game being delayed indefinitely wasn't a bad sign). So I want to give a bit of an explanation, and hopefully put you at ease about the “no date” stance I am taking.

In addition to working on Greedy Station (a project that has so far taken me 6-7 months), I have picked up another project as an artist, and am even considering taking on a third project depending on my availability.

I am committed to making games for the long term, but whether or not I am able to make a living creating indie games is hard to say. When I started this project, I had been out of work for a number of months, and was unable to secure work elsewhere. Paying the bills and keeping food on the table has been difficult, and with each successive delay, the potential of me doing this for a living dwindled.

So unless I take on other game projects that can help me sustain an income in this field, Greedy Station would likely come out, do middlingly, and never become anything more than its initial release.
I have lots of ideas for Greedy Station that will take it beyond its first release, and in order to make those happen, I have to take more time, spread my work out, and really dig into this industry to make a living at it.

So while Greedy Station is delayed and doesn’t have a new date, it isn’t canceled; plans haven’t been reduced in order to get it out to market sooner (which, in its current state, it would fail). In fact, the plans for it have only grown, and greater care is being put into the project; the work already done has increased the size of the galaxies, decreased the loading times, and improved the frame rate. Things are progressing, the game is improving, and it will come out when it’s done.

Thanks for your continued support and interest.
-fidgetwidget

i know how you feel, you want to give the public a release date. and you really try to keep that one, and work like crazy to get it done all in time. But as ALWAYS will there be glitches in the end, that spoil everything. and then you have to decide to delay the date, or to release a product that you know if could be much better.
i am glad you decided to do the first thing, but it does hurt as the developer.
just keep working on it, and ones you will have a release date.
but, it is indeed best not to talk about one before you are absolutely sure that you can keep it. i know this so well because i made the same mistake so many times.
success!!

Take your time. I'd rather it be late than incomplete.

Im still waiting man This is an impressive piece of work. :)