We now have our own facebook/Myspace page. Also reporting in for out first ever Media Update.

Welcome to our first Media Update! I have been toiling away the hours the past few days adding in textures and searching up how to add npc skins. But first I think I should show off some of the stuff I have found. I will not post up any textures at the moment and probably will not ever as there will just be to many (thousands of new textures). Also I would like to announce that we, by extension of our dev group, now have a Face Book page, and a MySpace page.

Now for some of those skins: 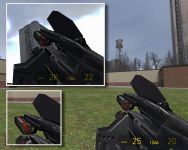 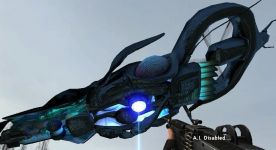 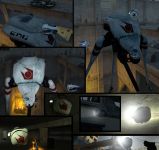 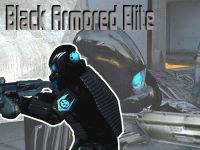 Maybe more to come later. I am still debating whether or not to grab a HD weapons pack. I am slowly making some progress on the first section of BM2OutA. I decided that I am going to make the outpost first then build the displacements around it so I havent touched the displacements at all in that map yet. I have however gotten quite a bit done on the actual buildings in this outpost. Right now there are two conquered resistance buildings and a underground combine bunker. I will post some screens of this area later in the week (Wednesday or Thursday) as part of WPR #4.

The question strikes me again and again.

Why on earth are you using a Ghost In The Shell Symbol for your group?

... really that's the only question if I ever see a news post from you guys.

lol its the image (laughing man face + hl2 icon) my dev group uses because we decided to call ourselves Laughing Man Productions².

Black armored from fps banana, no ?

yeah, thats where all these skins came from.

What's the point of making a news just to show some skin you stole from FPSBanana ?

lol stole? if you have permission its not stealing.

and to answer your first question its something new. showing off new stuff or getting information out the the definition of a news post.

but im not gonna debate bout that any further, if you dont think mods should use stuff pre-made from places like fps banana, thats fine, but I think it shouldn't matter, if it cuts down on the mod workload its golden (again if you get the go-ahead from whoever made it).

anyway, it looks like WPR #4 will be coming out on Thursday this week. I was going to get some work done on the map yesterday but due to circumstances I was unable to get around to it and it should take me 2 days to finish this base camp area for the Combine (with displacements).

Oh, of course if you did get a permission, there is no problem with it. What i meant is : making a news about some skins and models you didn't make, showing no kind of "new" content is pretty useless.