Euro Force Map Pack carry the 3 maps from this boost pack to work with HER Battlefield 2. 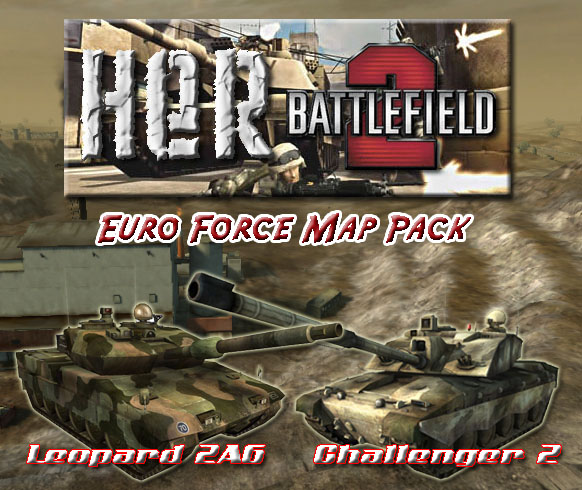 With the release of the version 2.5 of HER Battlefield 2, some people said the new Euro tanks were still weak like the original ones and beeing impossible to beat the other team with HER tanks.

I didn't understand why the tanks wasn't updated but they were right about the tanks. So I found that DICE released the tanks inside the maps instead of the update, and that's why when the maps loads all that I did were replaced by the map settings.

So the only way to make these 3 maps playable is changing the map files and release them as a map pack. Here the 3 maps from Euro Force altered that will work in Singleplayer, Multiplayer and COOP:


Then the tanks Challenger 2 & Leopard 2A6 will be as good as the others in HER BF2.


To get AMAZING maps to play with your friends, I recommend this great site below:


Now you can fight in equal condition against your enemies! Enjoy the war! :P

Excellent work Hajas.
Great to know you haven't shelved this one, and now that I'm in Canada I'm gonna get BF2 just for this.

thanks! enjoy the war! :D

eh...i doubt it would take 1 shot from an assault rifle to immobilize someone though...

let me shoot you in the chest with a M16 and let's see... do you wanna bet that you will not fall? I bet you WILL! :D

how about 1 million dollars? but you paid first of course, since will not be possible to you pay me later... :P

HER Airborne Medal of Honor: Airborne