A turn of events sees Sydney forgoing his selfish nature and thrusting himself into perilous situations on the seedy streets of Victorian London, not for love, sympathy, life or death, so why? He isn't quite sure yet…

The Slaughter is a point-and-click adventure game taking place in Victorian London in the shadow of a string of serial killings. Players will assume the role of Sydney Emerson, a thirty year old private investigator whose life isn't unfolding the way he once hoped, his recent cases mostly involving locating missing pets.

A turn of events sees Sydney forgoing his selfish nature and thrusting himself into perilous situations, not for love, sympathy, life or death, so why? He isn't quite sure yet… Explore the seedy streets of Victorian London, searching the slums, taverns, opium dens and even Sydney’s dreams and hallucinations for clues and leads, meeting a host of interesting, insane, murderous and downright annoying characters while exploring the deeper human condition. 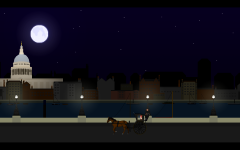 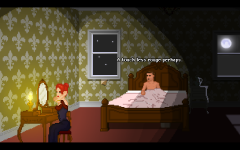 Experience an atmosphere like no other, inspired by the immersive and disorienting works of artists, authors, filmmakers, musicians and videogames, from David Lynch and Pink Floyd to Max Ernst, Cormac McCarthy and the Final Fantasy series. The visuals, narrative and soundtrack will work together seamlessly to transport you back to the streets of late Victorian London on a gritty and historically accurate level. 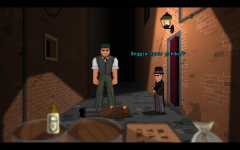 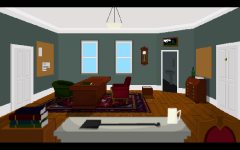 Left: A beating from a criminally insane child. Right: The rug really ties the room together....

This game will be a love letter to all the things that make adventure games great, and to this end I have made a promise never to make any compromises. This means that every idea that sounds great will be executed to the best of my ability, even if it means hours of work just for two seconds of a humorous yet not vital character animation, or the retention of mature themes and language even if it decreases the target audience size, not for shock value, but to build a realistic world.

Why am I doing this?!

What is it about games like Final Fantasy VII, Broken Sword, Monkey Island and Silent Hill that make them stick with us forever? If the answer is as simple as music, visuals, gameplay or story, then why do we find it so hard to explain this to those who haven’t played these games? Atmosphere is the key. It’s an inexpressible atmosphere which sinks you into the Sector 7 Slums, the Paris sewers and the pirate ridden SCUMM Bar, so that even after years of not visiting these places, the smallest collection of musical notes can instantly transport us back there as if we had played these games only yesterday. The Slaughter seeks to kindle these same feelings in at least one person across the world.

This game won’t be everyone’s cup of tea, I'm sure of this, but for those who find that some aspect ignites a spark in their mind; there might just be more in it than you can ever imagine.

Brainchild Studios is currently a one-man operation led by me, Alexander Francois. I'm a published author who recently quit my job as a creative writer to focus all of my time on The Slaughter. I've made games since my childhood, and originally studied Games Design at university before completing a degree in English Literature. At present I am creating every aspect of the game, but intend to employ the talents of freelance artists in the future to ensure the quality of the game never falls.

My sincerest thanks for reading my ramblings, and watch out for updates if you like the look of The Slaughter!

Makes sense that you're a published author: the quality of writing on this page is a cut above, which gives me a lot of faith in the game itself.