Empires v2.24 has been released with greatly improved balance, and support for up to 64 players on a single server!

Posted by Coffeeburrito on May 9th, 2009 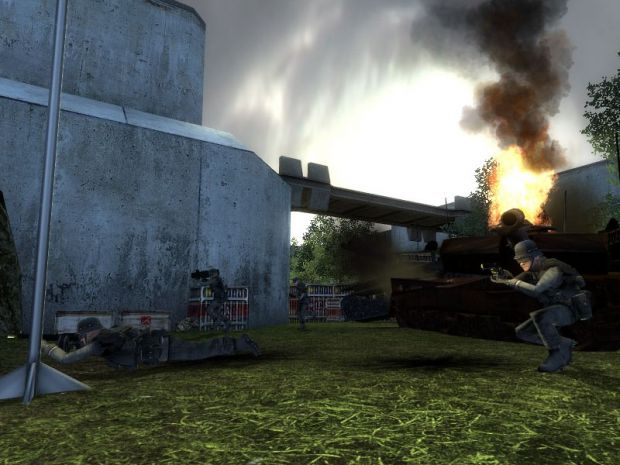 Empires v2.24 has been released. Now supporting up to 64 players on a single server, the battles are bigger than ever! Other improvements include aesthetic changes for better teamwork, new mapping entities, and greatly improved game balance.

Added:
+ New building and infantry damage resist system
+ Plus sign in class selection screen next to weapons that have multiple options.
+ If you have Revive as an Engineer, there will be an icon above friendly corpses.
+ Mappers can now [set/get/modify] [NF/BE] [tickets/resources] via inputs/outputs for emp_info_params
+ New entities "emp_vehicle_preset" and "emp_vehicle_spawner" for spawning vehicles
+ New entity "emp_mine_restrict" to block placement of grenadier mines
+ DOD-inspired chat escape sequences (%_c,%_h, %_l, %_m, %_n, %_s, %_w)
+ Better bindings so plugins can use their on-screen menus
+ Can now see name and health of friendly players without directly looking at them; health indicator on friendly players is coloured according to health
+ A few client messages for research (research cancelled, insufficient resources, research already in progress)
+ New particle effects and sounds for certain vehicle MGs
+ emp_coast and emp_arid

Modified:
+ When selecting infantry units in Comm View, the selection images will accurately reflect the infantry class of the unit.
+ Default commander option is now to be opted out
+ Bullet knockback forces when proned and crouching are now equal to that of standing.
+ Maximum number of slots is now 64 (BE CAREFUL WITH IT)
+ Updated manual and quickstart guide

Fixed:
+ DLLs compiled with statically linked libraries, should no longer need the c++ redistributable
+ A few crashes
+ You no longer run faster against a wall
+ Chat window buttons are now hidden at the start of a map, but chat window permanently has a slightly slightly grey background
+ Locked various server-crashing commands
+ You can now use the center button of the flower voice menu in a vehicle with handbrake (jump for infantry)
+ You can now bind commands to semicolon

Very nice work! I can't wait to see more updates in the future, this is one of my favorite mods.

It still bothers me that the NF barracks are much easier to hit than the brenodi ones. This really breaks the game in some maps.

I never see more than 8 people playing this game, it feels like it's meant for at LEAST 24 people per map

The game is indeed meant for more people, but maybe you just try to play at weird times. The G4TC server fills up on a daily basis, and Nachos probably will too now that it's back.