With the release of the CK2 1.101 patch a few days ago, we present Elder Kings 0.1.3a. This is a relatively small release containing primarily bug fixes and compatibility with the newest patch, although as always we have included a few new elements to the mod!

With the release of the CK2 1.101 patch a few days ago, we present Elder Kings 0.1.3a. This is a relatively small release containing primarily bug fixes and compatibility with the newest patch, although as always we have included a few new elements to the mod! 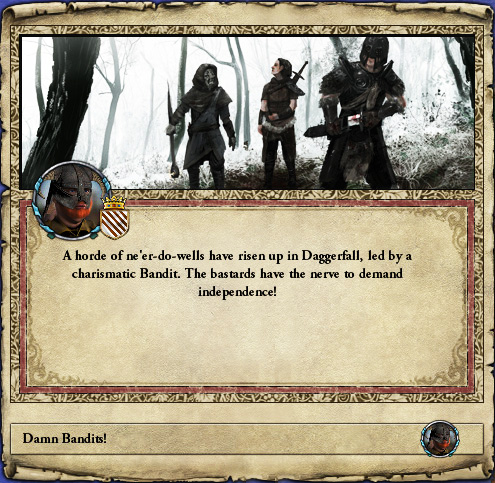 One new "feature" is the addition of two new rebel types; Bandits and "Warlord" Rebels. The Bandit Rebels will start spawning in provinces suffering from certain modifiers such as the "Bandits" province modifier, smugglers rings, thieves etc and are lead by a Bandit Leader. 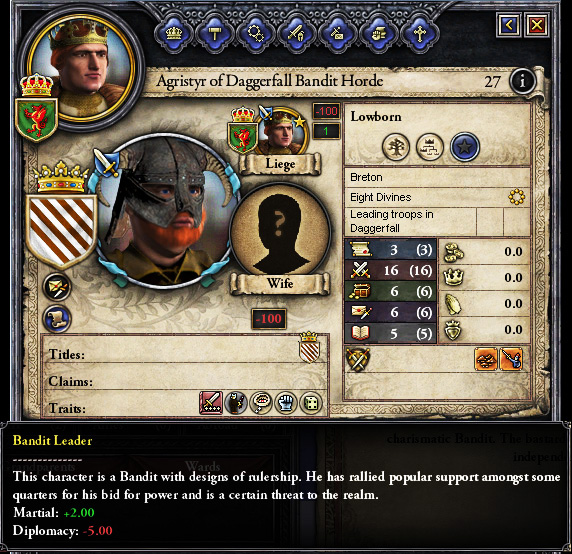 The leaders of the Bandits are generally more capable than Peasants and other rebels, but they don't reinforce like other rebel types. Leaving them unchecked could see the rise of a Bandit King... 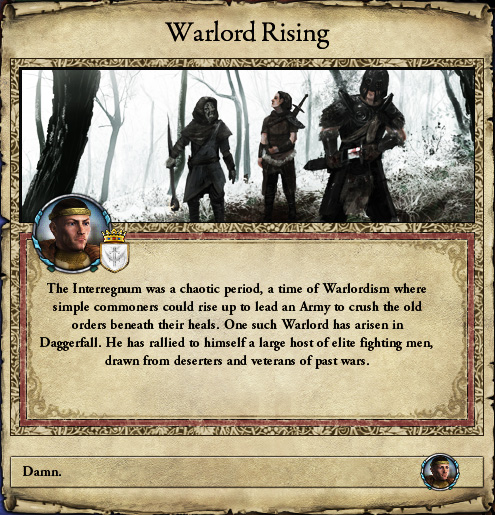 The second type of Rebel is the new "Warlord" type. This rebel is a rare type that will spawn randomly during the Interregnum. 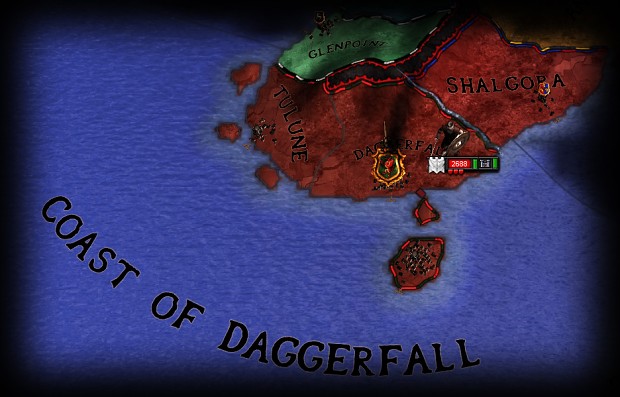 Warlord rebels are extremely dangerous as their armies are more powerful than standard rebels, and their leaders are much more capable and they can also recieve reinforcements like other rebels. 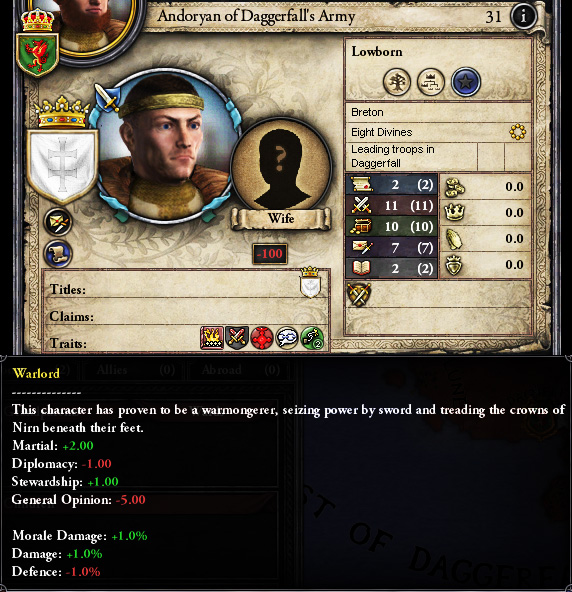 These "petty" Warlords are part of the effort to depict the uncertainty and chaos of the interregnum, when men and women could rise to become Kings, or possibly even Emperors from relatively obscure origins. For this reason they don't require any province modifiers, or even revolt chance, all they need is an "incompetent" top liege, someone who is overstretching themselves, and a Warlord may rise to challenge them... 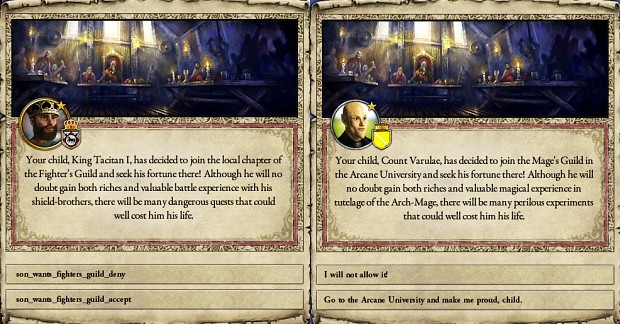 There's also a small reintroduction of a previously removed feature, that being Guilds. This element is however a very heavy WIP which will be expanded on in the future. What's there is fully functional but lacks localisation in some parts, and expansion to include other Guilds. 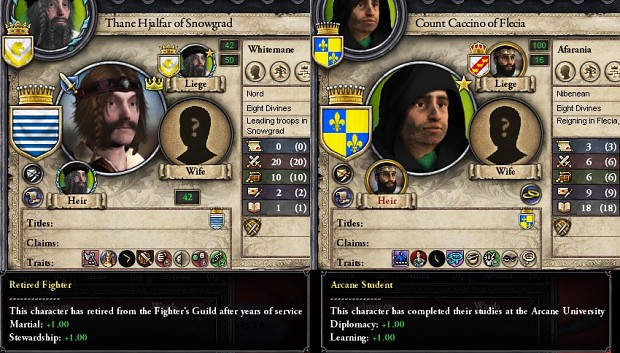 Changelog
- [Added] Many more religious icons.
- [Added] 2 new rebel types; Bandit Rebels and "Warlord" Rebels.
- [Added] Temporary "failsafe" in case personality events don't fire for children.
- [Added] "Guilds", based on the Varangian Guard from TOG but with an Elder Kings twist.
- [Added] Events to Court Mage "Root out Cabals".
- [Added] Mer "Pregnancy" system to better control their propogation.
- [Fix] Minor title autoassigner spamming the same jobs or handing out more than one. (This is the second or third time it's been fixed, it just keeps breaking every other patch!)
- [Fix] Dunmer Great Houses shouldn't plot for independence.
- [Fix] Cabals should now start properly appearing.
- [Fix] Senchal not de jure switching/destroying on forming Elsweyr.
- [Fix] Keeps having more than one tech trigger has been removed.
- [Fix] Grand Hunt should now be available again.
- [Fix] Warlord CB is now functional again and works as intended.
- [Fix] Various Capital locations were set wrongly in many titles or were missing, these have now been corrected.
- [Fix] Map positions were off, causing fleets to disappear into space.
- [Fix] Court Priest not healing properly.
- [Fix] Indefinite heretic stronghold bug.
- [Fix] Marriage maintenance events (hopefully Argonian concubines of Argonians won't get the interracial incompatible trait anymore).
- [Tweak] Slightly reduced warscore from battles.
- [Tweak] Imperial Legion modifier now scales every 200 years.
- [Tweak] Added "completely_controls" to de jure assimilation.
- [Tweak] Warlord Suppression will now removed the Warlord trait if the Warlord has it.
- [Tweak] Holding setup according to internal plan for Argonia, Morrowind, Vvardenfell, Elsweyr, Pyandonea, Summerset Isle and Yokuda has been implemented.
- [Tweak] Warlord CB no longer requires OR = {} traits. NOT = {} traits are still checked for.
- [Tweak] Ayleid/Dwemer ruins will now provide a random tech bonus instead of a modifier (due to changes in the tech system in 1.10)
- [Removed] Malak religion, rolled into into the base Malacath religion.

A +1 learning bonus for completing the mages guild sounds a bit low doesn't it?

I know i have asked this before but it seems to be overshadowed by the big dogs. Are you guys planning to add the dueling engine to the mod, i think it could improve the flavour of the game quite a lot.

@Extradaemon: The trait itself that gets added is only a small bonus indeed, but that's because there are about 6 events...or more...for when a person returns home from their respective Guild, and those events can add points to your learning or martial, give you a higher level of education (a Journeyman Mage can become a Master Mage for example in some rare instances), or some other stat boosting traits. The mage in the screens went from Level 3 to Level 4 Mage ;)
Remember, we're trying to avoid the stat bloat that certain other large total conversions suffered (and I think still suffer) from.

@Swapper; It's highly unlikely the duel engine is going to be added. Due to the vastly expanded number of educations and things going on in our world (Mages anyone?), the current duel engine wouldn't handle it very well.