Easternanza is here, with a number of changes to make the Robocraft universe feel a whole lot more seasonal! Also, a new Mad Orc sale! Get the new robot and three months of premium for only $6.85! 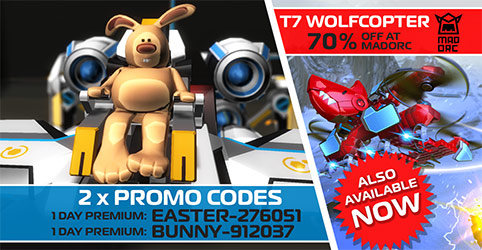 - Challenge Mode match-making of Platoons fixed, so Platoons are now placed in correct Tier
- Fixed issue where players in Platoons where sometimes being entered into the wrong lobby
- Fixed a bug which caused Platoon invites to lockup and stop working
- Fixed an exploit which allowed players to get higher Tier Robots into lower Tier battles
- Fixed descriptions of some of the cubes in the Depot, thanks to those who reported them to us
- Fixed an issue which stopped some Linux users from purchasing GC through Steam
- Rail Cannon audio now attenuates properly so you shouldn’t hear other peoples Rails from miles away

Please read this carefully, if you fly TS with a single Rudder you will need to adjust your craft.

We tracked down and fixed a bug known as the ‘ghost rudder’ bug which maintained full rotational stability of an aircraft using Aerofoils/Rudders even when it had been shot off. This has been fixed, so if you get your rudder shot off you lose rotational stability.

The Ghost Rudder bug fix also identified the reason that sometimes your aircraft became ‘stiff’ when steering after being healed. Essentially the rotational stability was being amplified each time an Aerofoil/Rudder was shot off and then healed back again. This would continuously stack making your craft get more and more stiff in rotation due to excessive rotational stability being applied.

If you add a few more rear facing Rudders to you TS you will gain the same level of rotation stability you had previously, but will lose that stability with each rudder lost in battle.

Thanks these Aircraft issues bothered me for a while now:)