I haven't posted any new D-day news in three months, during that time I've been slowly working to finish all of the Japanese ground units. I'm nearing the end of this task and currently have over 30 new units to show, I hope to post them all in the coming weeks and to start things off here are some of Japan's first tanks.

To see more information and photos click on the images to go to their Wiki pages. 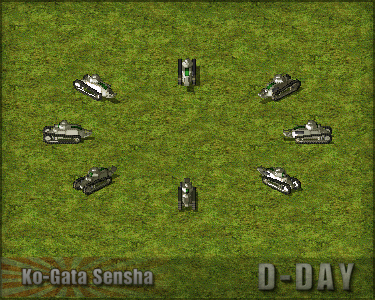 Like many countries Japan's first tank was the Renault FT which they bought 13 of from France in 1919 and named Ko-Gata Sensha, which means tank model A. They were initially given to the cavalry who were very impressed a requested more, however in 1922 the Imperial Japanese Army decided that only the infantry units will be allowed tanks so they were all transferred. In 1929 several of them were sent to Manchuria were they successfully participated in several clashes with Chinese forces. By 1932 they were becoming outdated and gradually replaced with new designs, so all of the remaining vehicles were given to the IJA tank school where they were used for driver training until they were worn out. 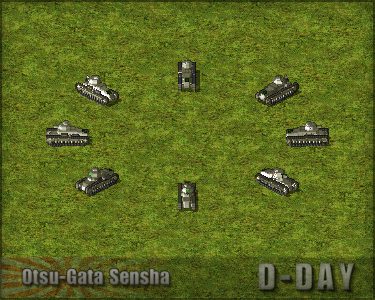 After the success of the Ko-Gata Sensha the Japanese sought to buy more modern designs from France, however the French were unwilling to sell there latest designs to another country, especially when they were all needed to equip their own army. Renault however was working on a new version of the FT17 called the NC1, which the French Army had rejected so they were eager to sell to Japan. After going through trials back in Japan the engine was found to be underpowered so it was replaced with a more powerful Mitsubishi diesel engine, the armour was also upgraded and the weapons changed to indigenous Japanese designs. They served in Manchuria and China along with the Ko-Gata during the 1930's, by 1940 they were still in active service but were soon replaced with new tanks. 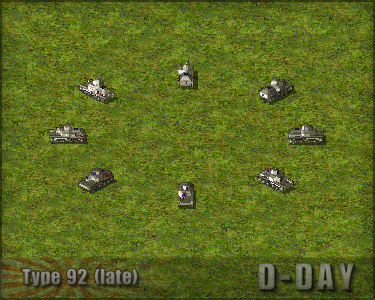 The Type 92 was Japan's first indigenous tankette, designed in 1931 for recon and infantry support with the cavalry. During that time though tanks were controlled by the infantry, to get round this restriction it was classified as an heavy armored car. exactly the same type of "reclassification" was also used in America with the M1 Combat Car. The Type 92 proved successful in China but tended to throw its tracks in high speed turns, to solve this problem the suspension and wheels were changed in later production models. 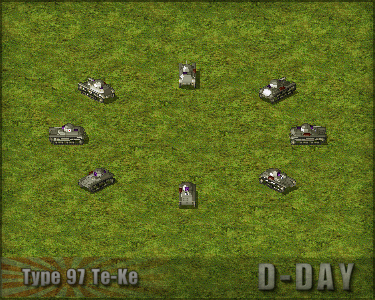 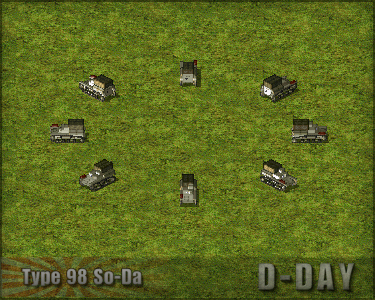 The Type 98 So-Da was an ammunition & personnel carrier based on the Type 97 Te-Ke, it could carry 10 infantry or 1 ton of cargo. 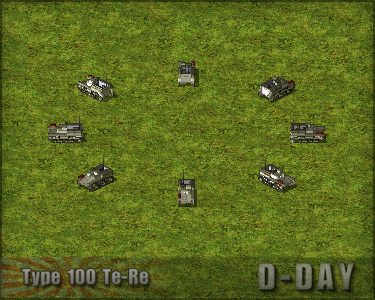 The Type 100 Te-Re was a artillery observation vehicle based on the Type 98 So-Da, the rear compartment that was usually used for storing cargo or troops was instead fitted with a large radio and observation equipment. Using these it would find and relay targets to artillery positions, then observe were the shells hit and give corrections.

Ingame the Te-Re works as a scout that can call in artillery strikes from off map.

This mod is not ok, a lot of bugs.

That's why it is a Beta.

I just learned a lot about the evolution of Japanese tanks. This is pretty interesting.

The information presented here is practically the same for nearly all pre ww2 countries tank production trends and after world war 2 broke out in full a tank arms race saw a trend in larger and heavier tanks as each nation tried to counter their rivals advancements in armor effectiveness.

Looking forward to the final version =)