A preview of the new E-50 Panzer, and a discussion of the mod's future.

Well, before anything, let me first say that the E-50 is finally in game and almost totally complete, it just needs some texture adjustments and a wider turret base. Currently, it uses a texture provided by Rain and Van Adrian, as well as a few vanilla textures. Some parts of the model, like the main body, are modified relic models. That said, here are some pictures of the machine in game: 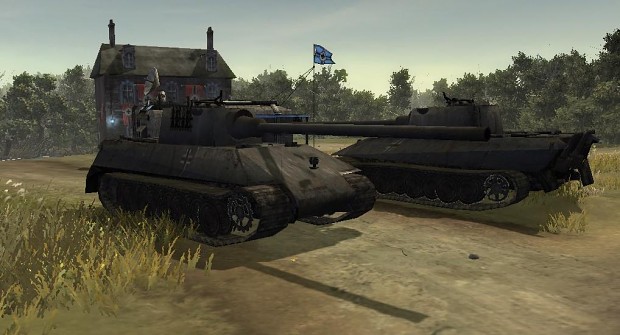 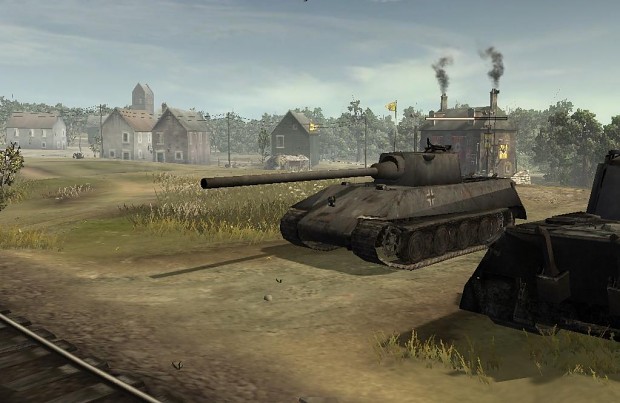 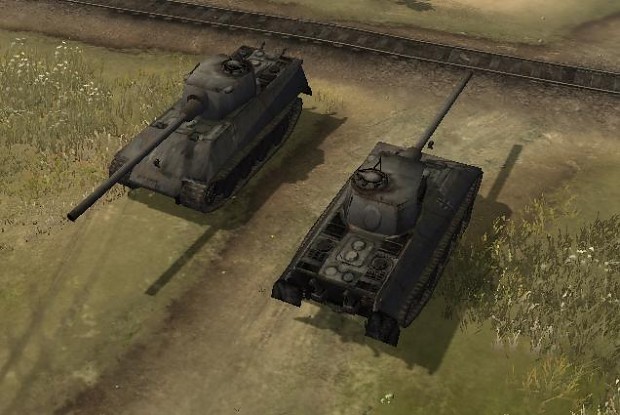 The E-50 operates as an extremely powerful Main Battle Tank, packing the punch of a King Tiger in a more mobile package. It lacks any hull or coaxial MGs, but easily overcomes this setback, especially when accompanied by the exceptional soldiers of the Panzer Elite. Panzer Elite Commanders may research technologies which make this tank's production faster and cheaper, until it is able to destroy the Reich's enemies through numbers as well as skill. Allied Commanders will need to use their early game advantages to pressure the Panzer Elite so that it cannot afford to upgrade its production, or they must prepare to face waves of increasingly cheaper, but still deadly, tanks.

Getting this model in game has been a pain for me, as well as a learning experience. It may interest some of you to know that I completed most of this model several months ago. The reason it sat around for so long, is because I got tired of the modeling and animation problems it had been having, so I decided to start working on the Sieg and EM-2 Rifles, as well as the Centurion tank. All three of those models are complete now. The Centurion MKI (the MKIII still needs to be completed) and EM-2 are both animated and in game. The reason the Sieg and Centurion haven't been shown yet is that I'm still working on their textures. Don't worry, they will be displayed upon their completion.

The main point I'm trying to make here is that I move from project to project when I hit a roadblock, usually so I can think about the issue and solutions to it while doing something else. This is why it has been taking me so long to how new content lately, aside from my computer trouble and academic slaving. Anyway, I'm still working, and with any luck, a beta with four factions (maybe even six of them) can be released this year. The old plan of releasing with just two factions was abandoned because there were too few new units in game to warrant a release.

Now then, here are my near-future plans, and a list of models I will be building for the Axis forces:

Before this, though, I think I will start showing some of the work done by other modders that is being added to 1949 which will expand and improve it. Look forward to quick image updates of some neat new stuff produced by modders who are probably a lot more talented than me.

Until our next meeting,
Lord Wiffleby

and the schmalturm was impossible to fit into the PZ.IV as it was.

It wasn't impossible to fit, the chassis had just reached the point where it would not be able to support its weight, especially when skirts came into play.

That said, my proposal was to create an upgrade to give all the Panzer IVs a new and improved chassis (nothing specific yet, but that seems to be the plan) which would allow for mounting the Schamalturm as well as other improvements.

If you can make it plausible, unlike WoT where they just went "screw it" and put a shmalturm on the panzer IV with no explanation, I might be Ok with it.

if you're going to go through all that trouble and spend all that money just to upgrade the gun on your IVs you might as well just replace all the IVs with Panthers, because by upgrading your chassis, turret, and gun all you're doing is creating an expensive, underpowered Panther with less armor

I hope you understand that it costs more to make new Panthers (which by this point in time shouldn't even be in production, replaced with the Panther II and later, the E-50) than retrofit old, reserve Panzer IVs with better a turret, suspension and gun (maybe even a new engine, no promises there though :X). This is actually the Legion's main method for acquiring better tanks, retrofit what we already have in reserve, or what we can get for cheap. Also, new chassis means other new variants, don't you think? I mean have you ever tried mounting an 88mm gun on a Panzer IV?

@Woozle, if you examine the stats for the Panzer IV-Schamalturm currently found in WoT you will find that it is actually an upgraded chassis (the PzKpfw-IV-Ketten Ausf. G), the standard Panzer IV using either the BW Ausf. G or Ausf. H. Not particularly important, but WoT does in fact pay attention to detail, few people notice it though. Now whether that chassis is historically correct or not is another matter...

And I hope that you understand that completely rebuilding an existing design to fit equiptment for which it was not intended is not only wasteful, but stupid. Considering that such a refit would not even give you the same level of performance as a design which was from its conception built to handle this equiptment.

By the way, I'd just love to know how much it costs the Jerries to produce new Panthers. In 1949. In an alternate universe. As opposed to a design that never made it off the drawing board.

In all seriousness though, this is LW's mod, and in this alternate reality setting he's got he can pretty much add whatever he wants. I just thought I'd give my 0.02 about what I thought of one design. Lets not bite each other's heads off over it.

There are three reasons for creating a new Panzer IV type:
1. From a game design standpoint, the Wehrmacht has too few new models, which is why it will receive this unit.
2. Now That I have made the turret and animated it, I can add it rather easily to other vehicles.
3. Adding more powerful guns to outdated tanks has a historical precedent. Admittedly, the Panzer IV would need some more modifications (perhaps more than necessary) to put a new turret with an 88mm cannon on it, but the design is easy enough to produce, and unique enough in execution, for me to use it. Besides, it will make a great addition to the Legion's patchwork vehicle reserve. So yes, the AR benefits outweigh any practical problems that would obviously arise from this project. I'm trying to keep this mod somewhat realistic, but not by sacrificing having a little extra variety.

P.S. I think I heard a Panther actually cost about 80,000 Reichsmarks (cheaper than the PIV), I dunno how much a new transmission and turret cost (and maybe a new engine), but it would probably be about 50% of that, I think, though I cannot be sure.

that turret is to blocky for e-50

@modfreak22
IMO it is acceptable for a vehicle that was never produced in RL.

really nice, great job bringing out such a rare tank into CoH

Nice. It feels a little thin though, maybe make it 5% or so wider? I know stretching models can be a little tricky, I work with models as well.

I'm working towards unlocking the E-50 in World of Tanks, about 1/3 of the way there.

Great update, man! Hope, we will see mod in the nearest future :)

When will come out this modification? This looks very good. I am looking forward, sorry for my bad english, I come from German land ^^