Today's version increment goes up only by one notch to (v.0.1.8.58). That's because I've been working on the same feature without committing the code once

After introducing water collection in the last version, you can now use water to cook a wholesome dungeon stew. The cooking pot introduced several updates ago can therefore be used to cook using any kind of food resources, water and wood to heat up the pot. Only when these three resources are combined will the pot produce the hearty stew. However, if you add just wood to the pot, then fire will automatically start burning and producing light as a side effect. The wood burns much much slower than in the furnace lasting much longer since less heat is needed to cook as opposed to smelting. To load the pot with resources, select them and then right click on the pot.

The following screenshot shows the new Cooking-Pot Frame that opens when you select the cooking pot. There you can see what kind of resources you have already loaded into the pot and once each slot contains at least one item, then the pot will produce 5 stews every so often. Each stew has a different amount of Food-Points and that depends on the type of food you put into the pot: Meat will make a much richer stew than just nuts or mushrooms. 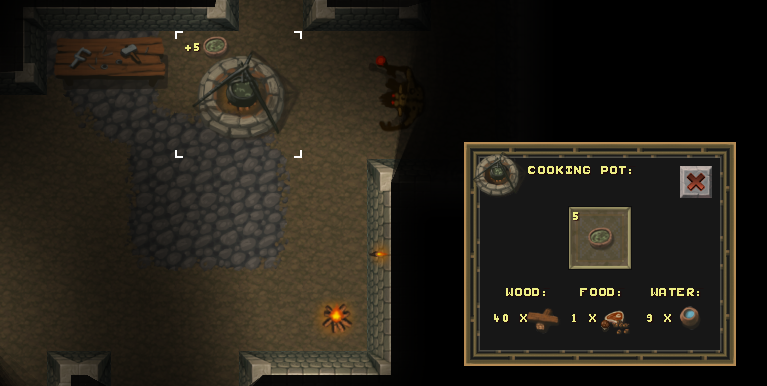 There are still some kinks and bugs I believe but for now I want to test it out and find the right balance.

Till next time and...

If you haven't tried it yet, download and support Dungeon Colony here!

Hi, nice little addition, I'd like to give some feedback:

- Right now the only viable strategy is to have the Master tank the bandits while the minions hit from safety. However this leaves him exhausted and without mana so research is hard. I think we need earlier access to red gem so we can make more expendable minions.
Otherwise I have no idea how to not lose when the tougher enemies come.

- the UI needs work. a) a way to deselect an inventory item without moving it
b) better selection of enemy to attack, with proper indication that he is targeted.

- Give us a way to pause the game and be able to craft items and give orders. Right now valuable time is wasted and it seems I'm always under attack.

I retract what I said about the red gem, you can get them pretty early. But I have no idea how to arm them with projectiles so they can use the slingshots.