Back to the Engine. This update doesn't bring much new content but many engine upgrades. It also changes some aspects visibly, scaling objects to the world. Many game controls have been re-tuned and improved. Tile have been sub-divided to allow more control to the player. Enjoy!

(This is a re-post of my blog: Dungeoncolony.tumblr.com)

I have been waiting for this moment a long time and I am happy to be able to post a new version again (v.0.1.8.150). As you will read, this version caused many bugs, and bugs seemed to appear exponentially. But most of them are now fixed and the engine has become more stable.

In the past, I had been releasing a lot new game features without tending to some other important game engine needs. Finally, I began tackling them a few months ago. The engine upgrades had been on my to-do list for quite some time, and I now regret not having started work on them earlier because the main issue here was that they concerned changing much of the core engine, which in turn affected almost every element, feature and game content created thus far. The only regret, really, (and my learning experience passed on to other game devs) is that of time and taking longer than needed, but nonetheless, it was tremendously fun to make the changes and see the engine improve upon it. As an independent developer however, and if you are one you will most likely agree, life often comes in the way of the thing you’d like to work on. For me, it was personal family matter, my day-time work, of course, including tight deadlines, but also a much needed break and a vacation to go back home to Europe and recharge the creativity batteries and get a bunch of new inspiration from some amazing landscapes and medieval structures. If you have been on my contact page, you may have noticed a picture of me there, in front of a castle. During my vacation, I finally hiked again to that same castle, a place of inspiration to which I used to go to constantly when I was younger.

A big apology to all Alpha testers who have already constructed big dungeons and saved them to the server: Anything saved before v0.1.8.150 is incompatible with the new engine; the changes in the game engine made it impossible (or way too much work) to be still compatible with the new engine. In the past, I tried to avoid that as much as possible, however, since this is still Alpha, and the main architecture of the engine is still not complete, this is something that is unavoidable and will still happen in the future.Below is a rough summary of all the primary engine changes that were implemented since the last release.
The main objective was to improve three core features:

The game was originally based completely on large tiles, which also governed movement, object placement, object triggers, collision and much much more. The upgraded engine required granulation in tile size that affected nearly every class in code. Back when I started Dungeon Colony, the first thing that I defined was the tile sizes. Here is the first screenshot I made after a few hours of coding the game. 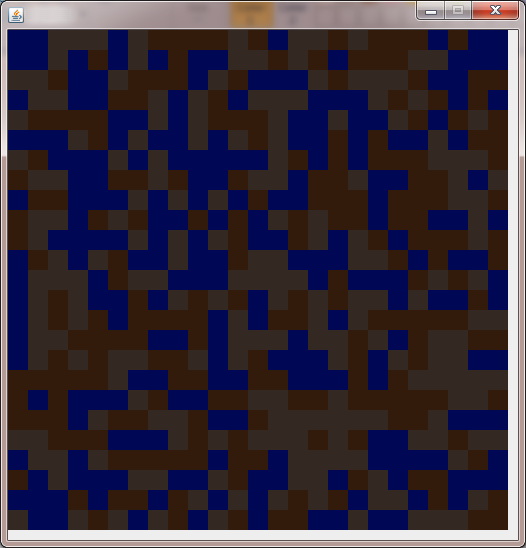 These are the different tile materials (stone, water, ground). The new engine is much more defined and can handle arbitrary sizes, removing the tile contraint and opening up amazing new game object possibilities than before. Size matters and brings new strategies to the player with regards to where objects are placed and so forth.

Reducing the tile size constraint also allows objects to have sizes that are bigger or smaller than a tile. For example, in terms of collision boundary, a rock is now around 8 times smaller than it previously was. This also reduced the selection boundary, the visible white rectangle that you see around a selected object on the map.

So far, I have never had that many bugs at once and with careful iteration, I managed to get the game back into a working shape, but I still need your help to find any remaining bugs left uncovered, especially when it comes to saving a game. I believe that there are still some bugs left that don’t save objects properly.

I moved to a new web server which caused the website to malfunction for a few days. The only problem was the registration page which is now fixed again. I am also trying to decide on a community forum and looking for different services. If you have a preference, I’d like to hear from you. The website is written in .Net, so something that is compatible would be good.

I would greatly appreciate your feedback, comments or suggestions. You can reach me via twitter or check my contact page. Finally, if you haven’t tried it yet, you can download the game free at Dungeoncolony.com. Support is always very much appreciated.