This update includes an Easter Egg: A new creature, the Queen Spider! Also new in this version: All the work the has been done to Dungeon Rooms!

I've just uploaded a new version. This one includes all the work i've done on Dungeon Rooms so far! But first, there's an easter egg too. I've added a new creature that is joining the spider family. This one is the Spider Queen!

The Spider Queen is 4 times the size of it's fighter class. And it is much much stronger and faster. So far you can add the spider from the Level Editor. Later, there will be levels with the spider in it: 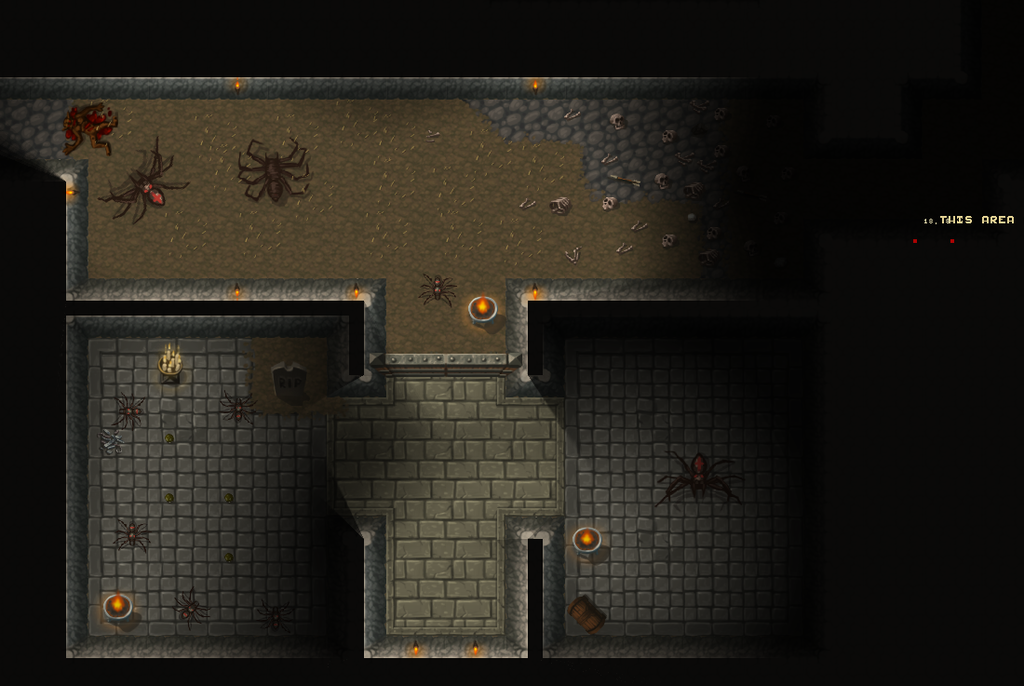 Check out this gif animation of the same level:

I've continued to work mostly on Rooms. (Check out the last two posts (One & Two) if you want to read more about the beginnings of rooms.) There are now 3 types of rooms, I will add more types later, but the 3 types that I start with are the most important rooms to keep the economy of your colony going. Every other room type thereafter is an add-on. Those 3 rooms are the Lair, Pantry and Treasury: 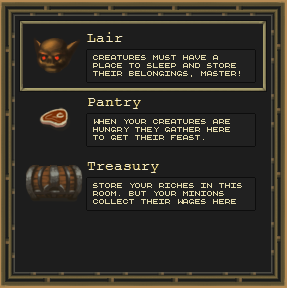 The Lair is the room where your a minions will live. Minions will sleep in their room and use it to store their goods. The pantry is where minions get fed and the treasury is where they get their wage.

In today's release I've added the logic to place objects inside a room. What that really means is that any objects that are located in a room tile, will be considered inside that room. Having the ability to track what objects are in a room allows me to set room requirements to guide the player into crafting certain furniture items to be placed in the room. For example, the lair will need a bed for the minion to sleep on and a chest to store gold.

- Adds Spider Queen to the Level Editor.
- Begins with Dungeon Rooms. Work in Progress:
- Creates 3 new rooms: Lair, Pantry, and Treasury.
- Can create, delete, merge and split rooms.
- Renders rooms on map if the Room Tool Button is selected.
- When hovering the mouse over the map, then the color of the room shows (faintly).
- When-ever a minion walks over a Lair room without owner, and if he is owner-less too, then he becomes the new owner automatically.
- Adds logic to remove room owners when a room is deleted or when the owner dies.
- Saving and Loading Rooms is possible.
- Shows room info when hovering.
- Shows room colors on brush when painting rooms.
- Adds inRoom Room property to all objects.
- Adds ability to add objects to rooms.
- Adds ability to assign a room a specific object requirement.
- Sets requirements for the Lair room.
- Removes invoice game activation option since it never worked in first place.

Nice to see your fast progress! Good luck with the rooms! :)

Thanks... I'm done with phase 1 of the rooms. Next I'll improve the dungeon economy (which needed the rooms to be done first)