Lots of news since our last update. We've opened the voice acting casting call, tentatively named a release date and taken lots of pictures of the work in progress Cylon Basestar.

We've been a little quiet again the last couple of months. But work has been coming along quite nicely internally. The first piece of news is that we can say now what sort of date we are aiming for. Right now we'd like to get Shattered Armistice out by the end of May. Whether we'll make that date is dependant on a lot of things going just right but that's what we're trying to do.

Secondly we've opened up our voice acting casting call. If you'd like to hear your voice in the game (and have the talent to act a part) then check out the details on this thread.

Lastly, we've got some pictures of the WIP Basestar for you. The Basestar you may have seen in previous videos was never meant to be the final version. It was a rush job made so that the mission designers could get to work (and also so that we'd have something to show off). The plan had been to improve and finish that one off but unfortately the modeller in charge of doing that was unable to do so due other commitments and the task was passed to another modeller who preferred to start from scratch.

As a result we have screenshots of the brand new model. Modelling is complete so only UVing and texturing remain. 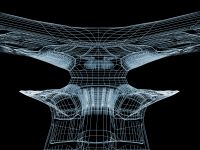 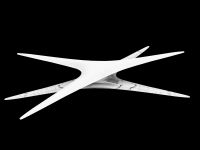 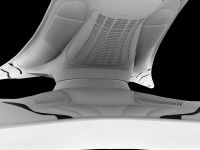 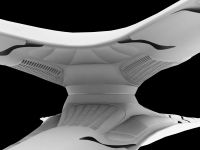 That's all for now. Hope to see you for the next update and with luck, maybe we'll see some of you online playing the game with us in May.

That basestar looks quite muscular :P

Looking forward to May for more than one reason now!

I don't think you need the game, don't go off me though.

You don't need Freespace 2 at all. Everything you need in order to play the game will be in the download.

I know it's extremely hard for you to approximate, but if you could any way that would be awesome, how big do you think the download will be? A couple of Gig? That would be my guess seeming as it is a stand alone game.

And also, so you don't cut your selves short for the massively impressive work you are doing, i would reccommend setting up a paypal donation on your Official web page, I know i would definitely pop a donation in there as would many. You don't get such an awesome game like this for free anywhere else.

Nice! Now that BSG is over we need this game! Though, since a couple of seasons fighting Cylons is not en vogue anymore and there are good and bad Cylons...
...hted how they ruined the show, but I loved season 1+2, when Cyclons were stilll Cylons and fighting was still frakking.

Great! Love space sims and by the level of detail on that ship, I think it's gonna look great with textures. Looking forward :)

That is some great work! Look forward to the final version.

OK ive got one question... IF it will be released at the end of may, what will be included in this version? everything like "done" or just a few benefits of the final?

would be nice if i can get an answer

We're not doing a Demo/Final release thing. The idea is to instead release packages of ships and missions whenever we have them. So the first package will be small since we've had to concentrate on the stuff which we probably won't be changing like the interface in order to clear the decks for future releases to just be about ships, missions and code improvements.

However you will get a Battlestar, the Cylon Basestar, several RTF ships and most of the fighters you've seen so far.

Starting to think this may never come out. That would be a shame too.
You guys have done a fantastic job from what I've seen.. Plz update the release date if you can.