Go behind the creation process for Drug vats in the game, and how they work in Unity. There's also now a Trello Board which you can follow development with!

While fatigue is a mechanic in Pit Fighter Tycoon, it unfortunately affects me as a human as well. The gap between DevLogs is due to exactly that; so I’ve written some thoughts about that over on my website.

Planning for the Future

Along with a planned return to monthly DevLogs, I have created a Trello board, where you’ll be able to see what I am working on at the moment. You can find that here!

I’ll be using it to keep track of everything as I move towards the next major milestone – Feature Complete!

When I initially announced this project on Reddit, there was a significant amount of interest in how I learned to make the game itself. I’m hoping to shed some light on the art and UI side of things in this blog! If you’d prefer to not know how the game works, maybe skip this one.

Everything in the game has been built in Unity. While my art tool of choice is GIMP2 – as it is free to use (and superior to Photoshop for pixel art, in my opinion anyway).

This is the Training Interface, it’s currently a work in Progress so colours and design are subject to change. 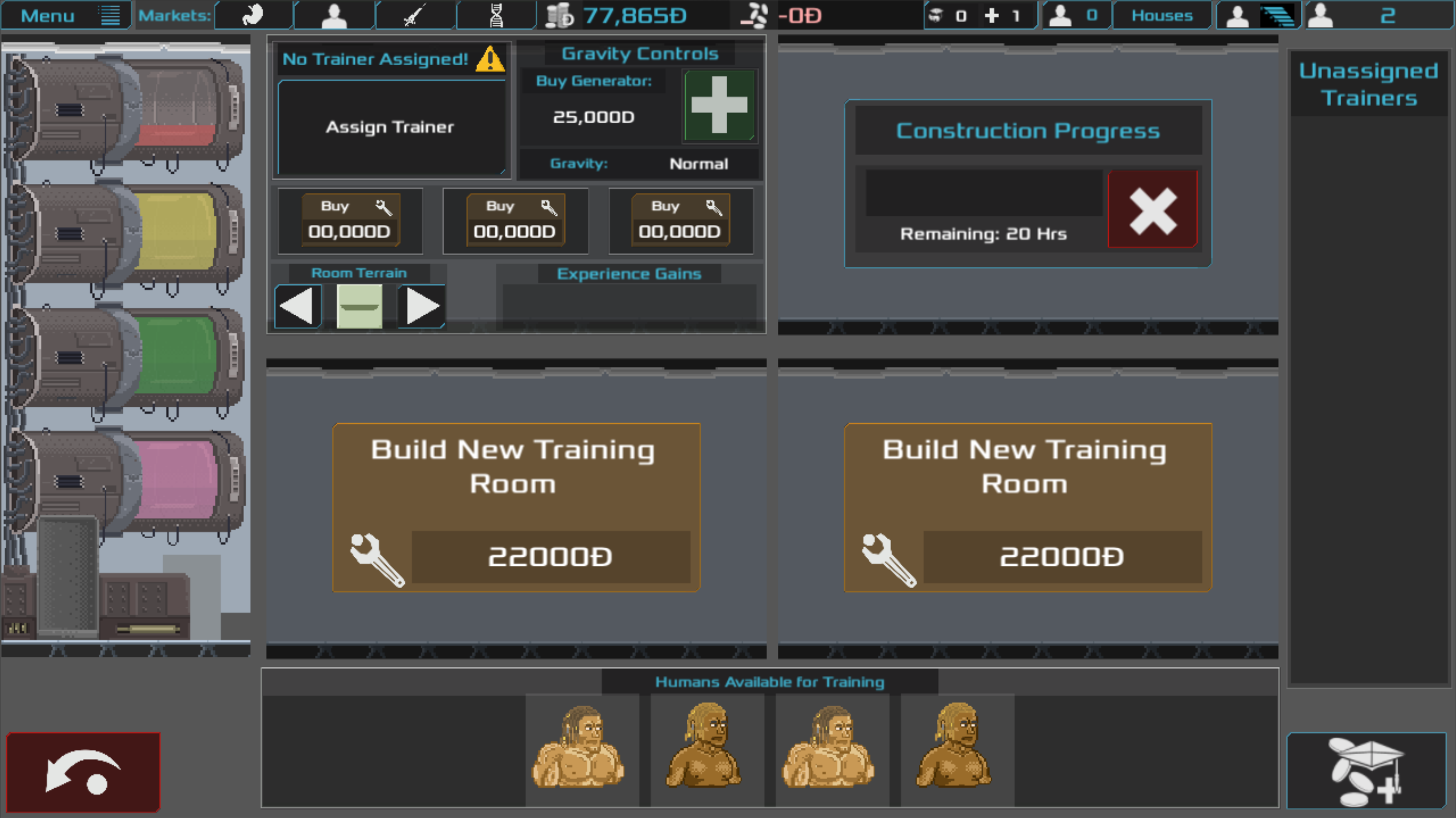 Most of the art here is placeholder for now. However, on the left side of the UI there are a series of Drug Vats. These will allow the player to prescribe drug regimes to their slaves, potentially killing them. I’ll write more about the mechanics when they are finished in the next DevLog!

Each of those vats is a UI object within Unity, which contain a number of image objects within them. At the top level, they just have an empty shell, which is done so that they scale properly with different screen resolutions. However they consist of a number of sub-objects, which is where all of the art is. 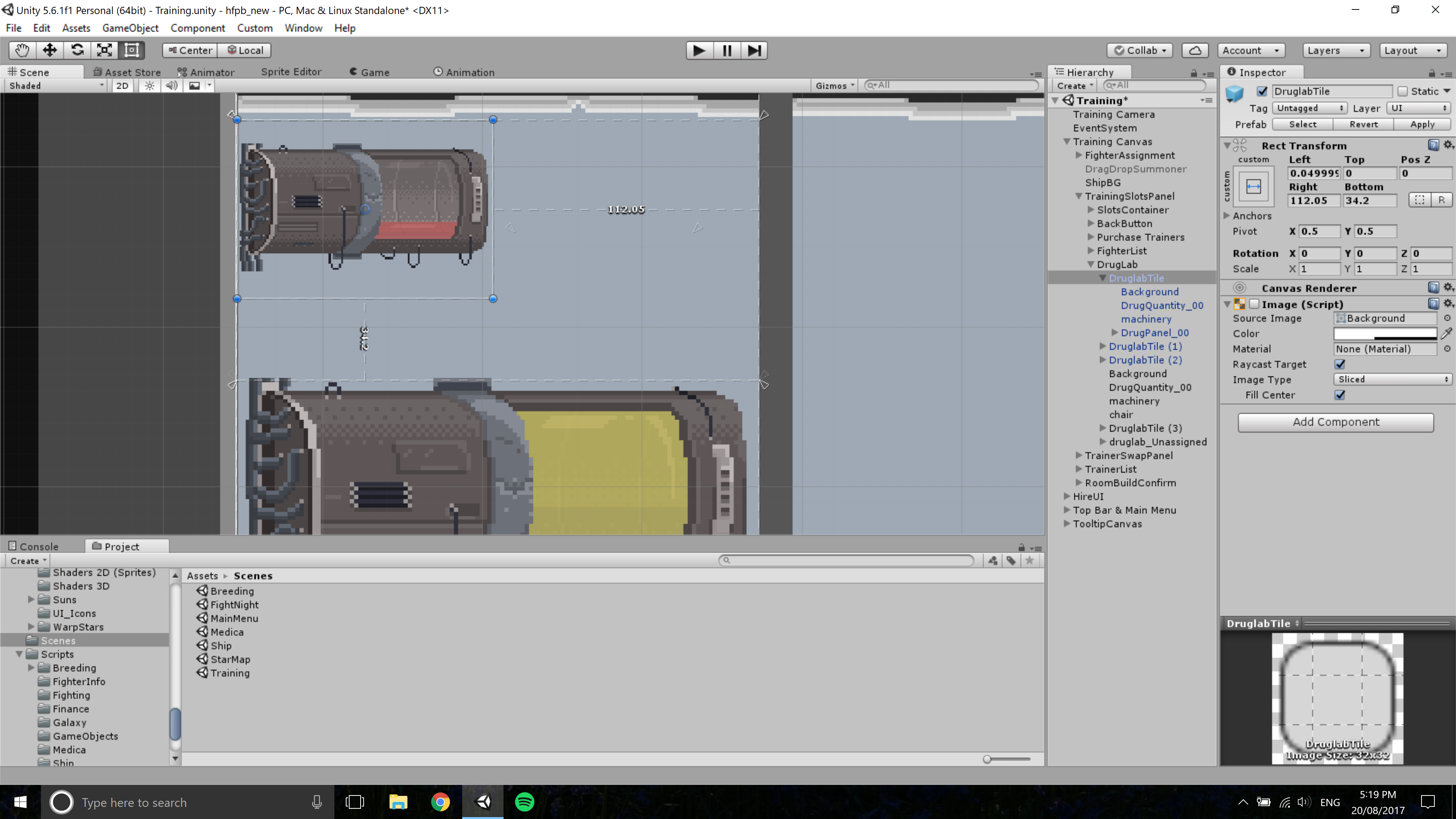 Through trial and error I’ve found that using the Stretch setting along with anchor points seems to work best for UI Scaling. 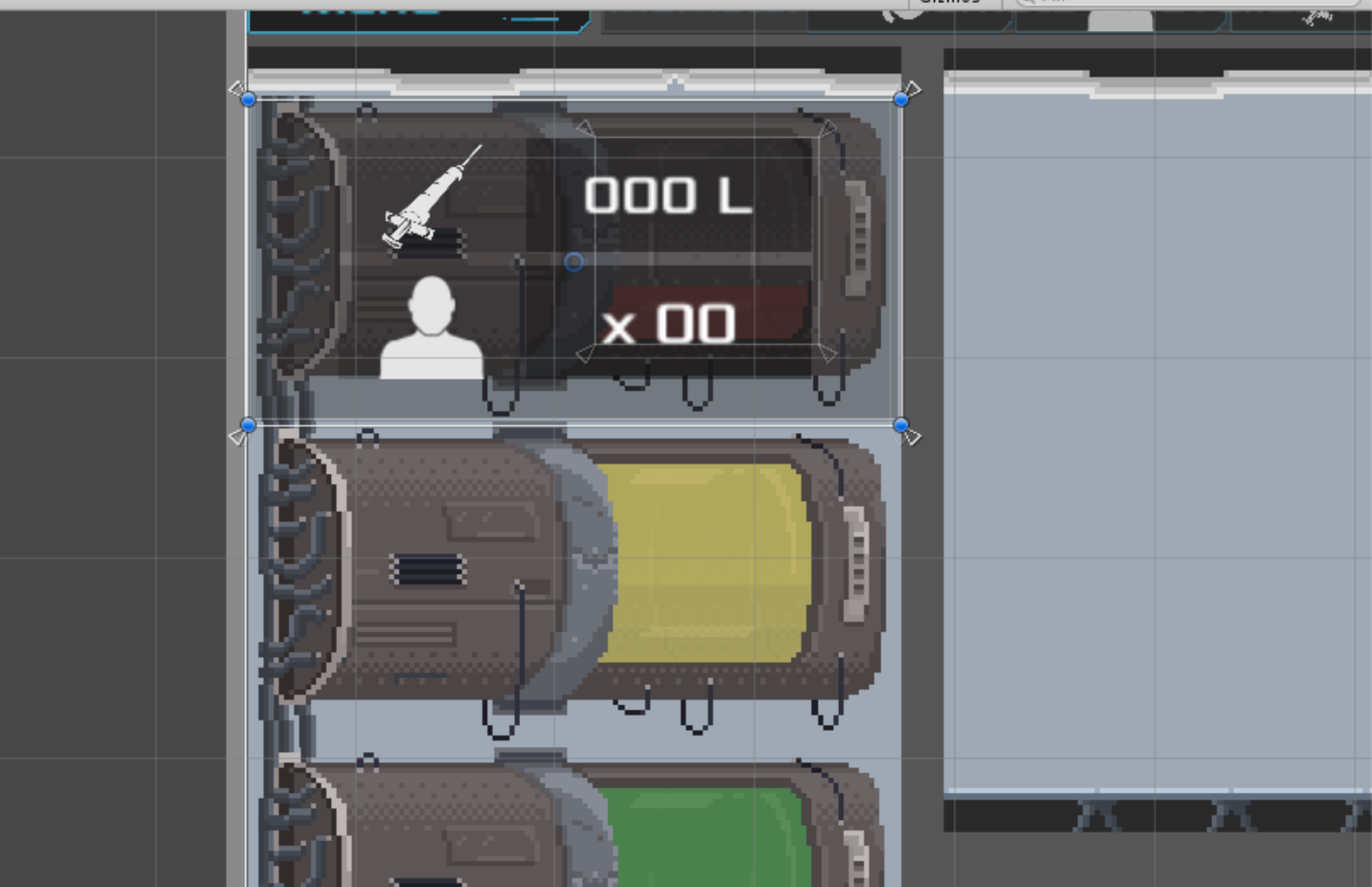 This game is very UI heavy, mostly due to the nature of it's genre. There's never a single 'right' way of doing something, just more and less appropriate/efficient ways.

Before creating nice looking art, you need to figure out the size and composition of the final image so that it actually looks right in the game itself. So, start with a rectangle, or square and place it directly in the scene. You can then figure out what size and shape your art should be.

The chair down beneath the drug vats started life as a maroon rectangle, then I began figuring out the shape and shading. 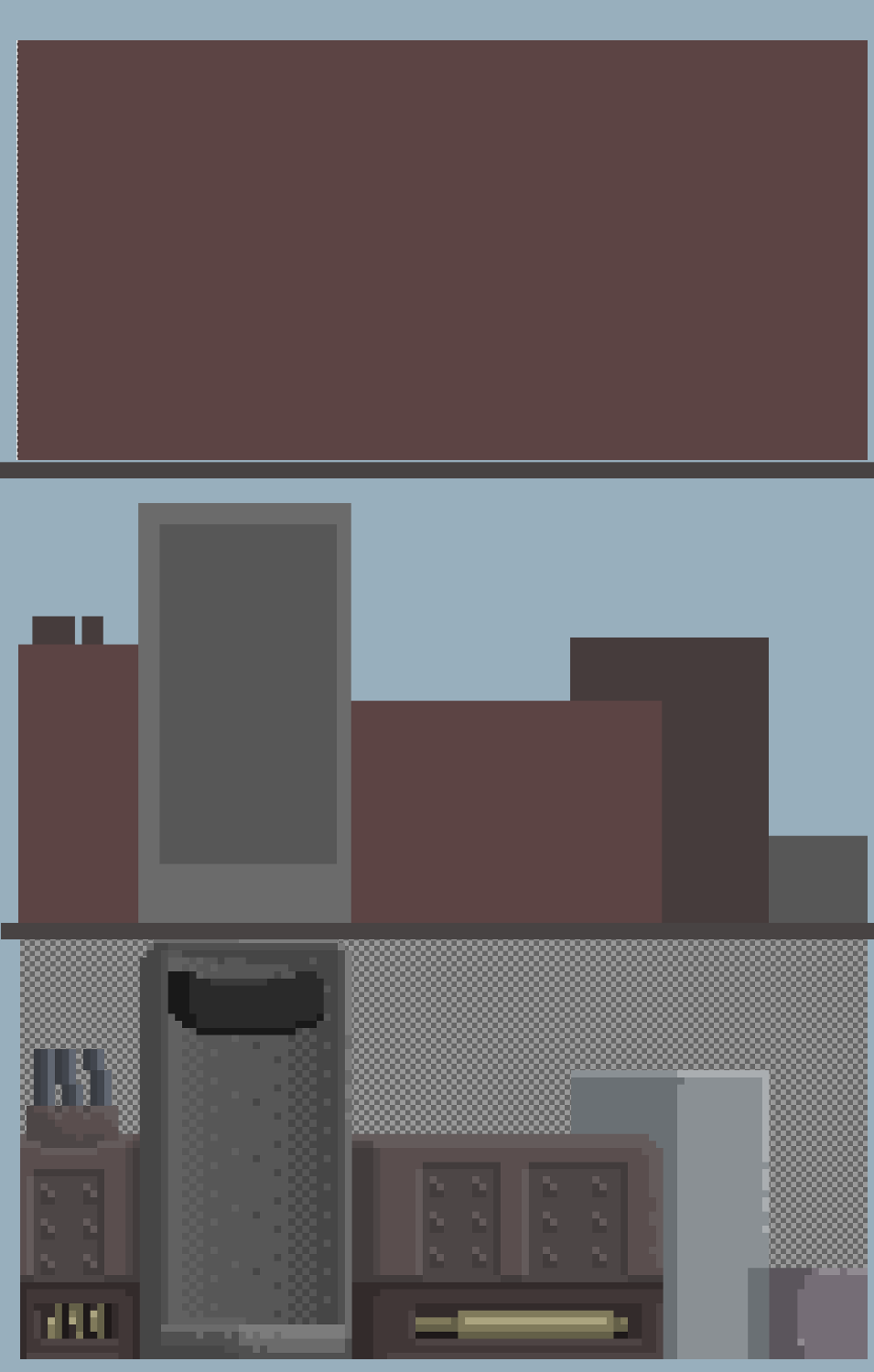 The drug vats themselves also started as a plain object, so that I could quickly and easily mess with composition. 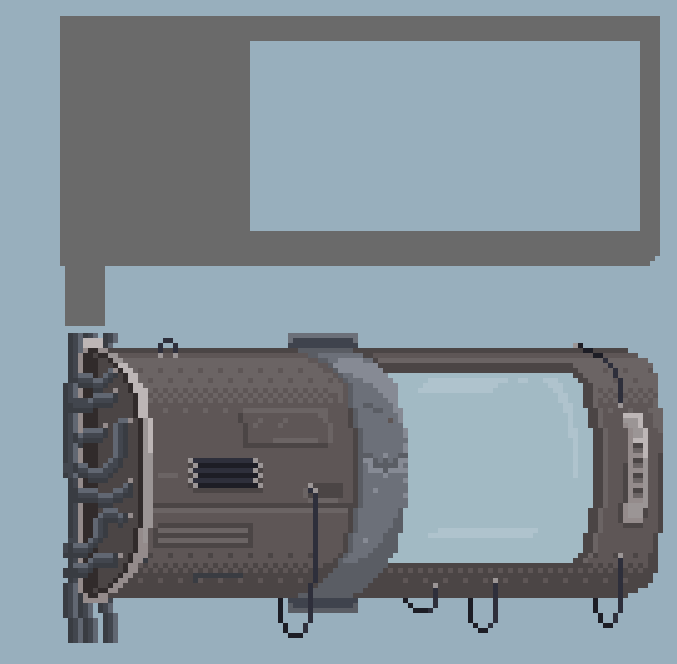 The biggest technique for adding depth in Pixel Art is Dithering. You can read a solid overview on that here: Spriteland.com

I’d strongly recommend making use of layers as much as possible. It allows you to break a complex object, down into more easily completed parts. You can also take bigger risks, as you’re safe with the knowledge that you can turn off a layer that simply doesn’t work with the image. It will also leave you better prepared for breaking up an art asset in the game itself.

The individual parts of the drug vat look like this: 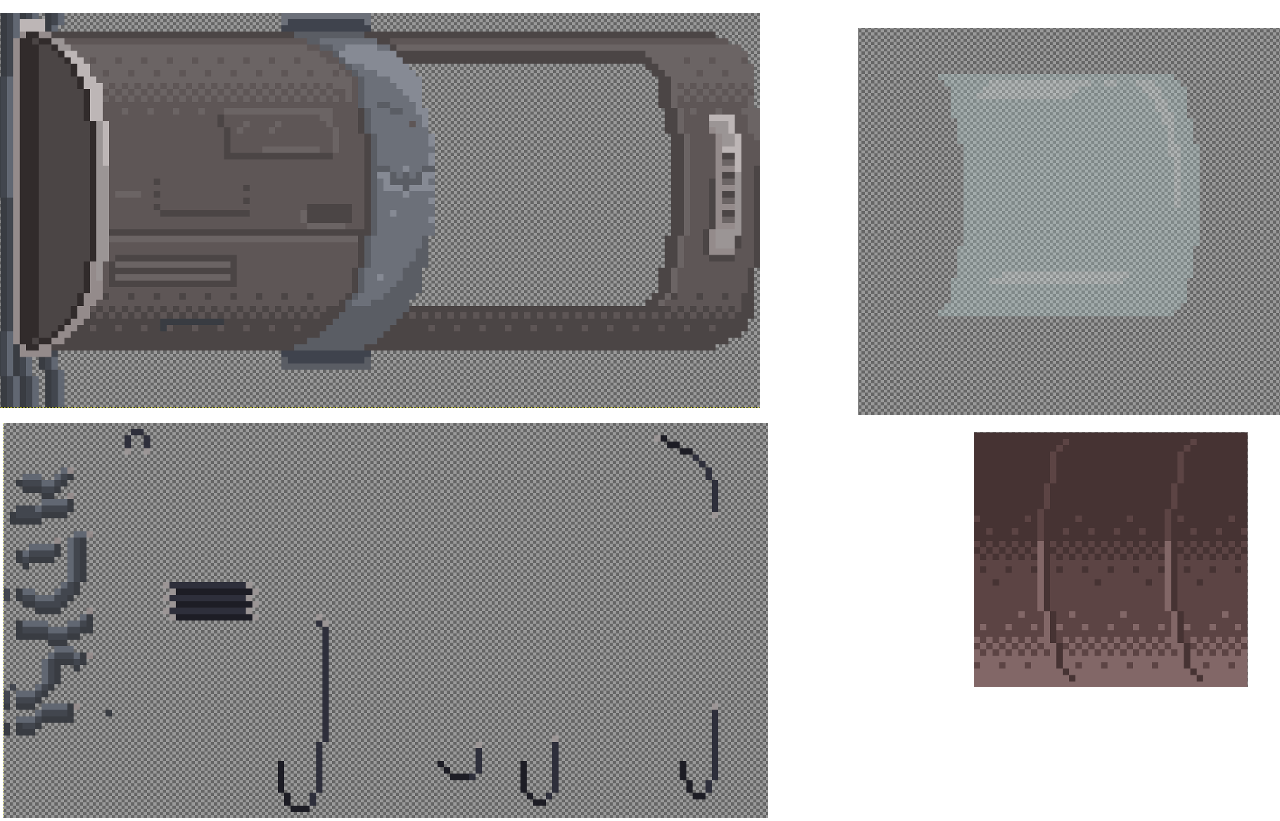 The background and liquid within are separate objects within the Unity Hierarchy as well, which will allow for a simple visual effect of the tanks filling up. It really all looks quite different when it's disassembled!

That's it for this Blog! Next time I will explain the mechanics of training itself, and how they impact the game. In the mean time, why don't you check out the Trello Board here: Trello.com