devil Theory: Alpha is now available for all to download. Please enjoy this challenging Solo RPG!

In devil Theory: Alpha, you play as Rebecca Delgado, a young girl trying to make a living during times of war. The game is strictly a solo RPG, meaning you control Rebecca and Rebecca alone. Fights are fast and frantic, requiring skill to defeat the enemies (up to 5 enemies in one battle) in each battle. Underneath the gameplay is an in-depth story told in the perspective of an older Rebecca, who is currently on the side of an enemy nation. Slowly, players will discover how this girl goes from a straggling run-away, to a soldier working for a malicious nation.


I do not own any of the music used in this game. Gameplay mechanics, music, sprites, and tiles were provided by Enterbrain, the wonderful contributing members of RPGMakerVX.net, and Bluelaguna.net.

The story centers around a woman named Rebecca. She visits the cell of Lynn, her ex-captain, and tells her that she will be executed tomorrow morning by none other than Rebecca herself. To comfort the dumbstruck Lynn, Rebecca tells a story of her past, something she is not very happy to share.

19 year-old Rebecca narrates her story while you play as her 15-year old self.

In the world of Azriel, humans have long exhausted oil as a resource. The world was close to a global panic, when finally, a new resource, a resource phenomenally better than oil, electricity, or any resource we use in our everyday lives, is discovered. This resource was called Valmite. Valmite was a special material that had been accumulating underground for thousands of years. The four major countries of the world had taken advantage of the Valmite's power and excavated almost every Valmite site in existence. Azriel is now a highly advanced civilization, with technology that can surpass anyone's imagination.

Now, only a single Valmite site remains. Dubbed the Valmite Mines, an all-out war broke out for ownership of these mines. Though the war ended with a truce, it did not last for long. Sekai, the country that proposed the truce in the first place had broken it, and now war is occurring once more with only two of the four main countries participating this time. Those countries are Avalon and Sekai.

Rebecca Delgado: 15 years old. Hails from Avalon. Because of a recent traumatizing event and the outbreak of another war, Rebecca ran away from her home country to find peace, as she knew she could not do a thing about the current situation. She arrives at a neutral country, Dolce, and is given shelter with the help of Captain Gabe. However, she soon finds that running away won't help at all and slowly gets involved in the war she was trying to avoid.

Captain Gabe: 25 years old. Hails from Dolce. Belonging to a country that had announced itself as neutral in the war, Gabe had no worries until he found that the leader of Dolce had plans to launch a sneak attack against Sekai. With the help of Rebecca, he attempts to prevent this from happening so his country won't be a victim of retaliation.

Kensei Yuuga: 17 years old. Hails from Sekai. Not wanting to follow their King's ideals any further, Kensei and his family defected to Dolce to find better lives. To their misfortune however, they arrive in Dolce a day after Sekai's malicious actions, and become the targets of Gabe and Rebecca because of their suspicious time of arrival.

Battles are fast-paced thanks to ziifee's Spin Wait Gauge System. The twist is, the enemy is the one who has to wait in order to attack. You, the player however, do not. Once your gauge fills up at the start of battle, it will not go down even after performing an attack. You will be able to line up attacks one after another. Sound easy? It is in fact, NOT. Your lack of waiting does not mean you can go trigger happy. Enemies may take a while to attack you, but they hit HARD, so you must make sure to activate your Barrier (Defend) in order to lessen damage. When you are sure the enemy is finished attacking, hit them back! Then defend...then hit back! It's a rinse and repeat process, but it keeps you on your toes, especially when mobs increase in quantity. Keep in mind that when "Barrier" is selected in battle, it will activate the second you hit that button. The command menu will appear again, but you will still be in Defense mode until you use an item, or attack. Once you use an item or attack, you will have to select Barrier again to defend.

You are SOLO in battle at all times, but no worries. You can exploit enemies' elemental weaknesses to delay their attacks and make battles more manageable. 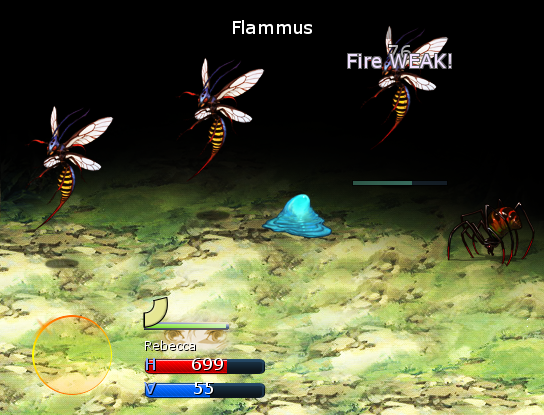 There is a Generator in your inventory that functions as a mobile shop. You can buy and sell items easily just by going into your menu screen instead of going to a shop every time. 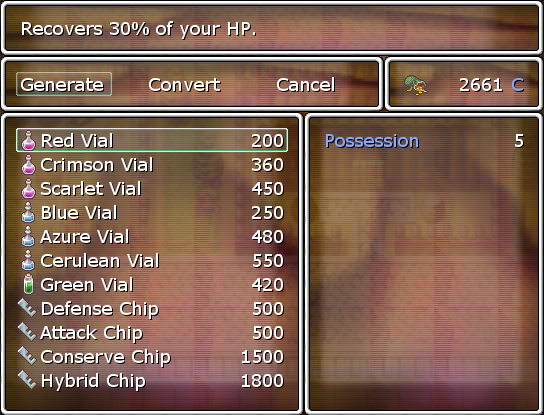 The EZ Grill can make nutritious food for you, provided that you gather the right ingredients first. 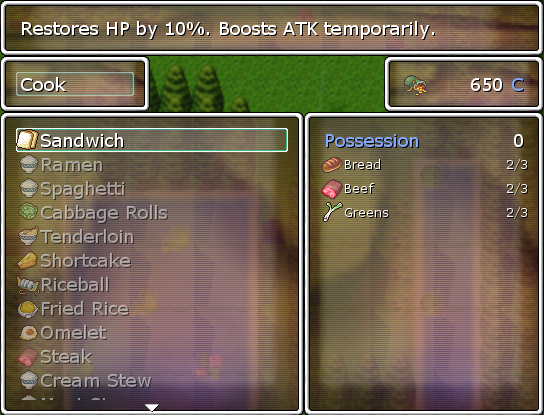 No Leveling System exists in this game. Instead, you will be using the Growth Chart to enhance your abilities with money earned through battles. 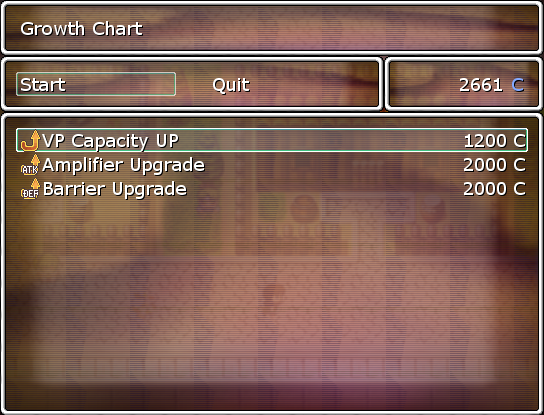 Rpg Maker ;) none the less it looks intresting