This time we take about our new secret world domination plans (we are germans you know!). No just kidding! A new unstable release has been upload, we have a new nice plant shader and we introduce Lisa!

We found several errors in the current unstable release. So we uploaded a new version to Steam. Changelog:

If this version works well we will upload it to the default branch.

Our modeler who also studied biology had the idea to improve plant rendering. The problem with the leafs is that in the real world the light passes through them. In the old version this was not the case. This has now been changed. We wrote a special plant shader which simulates this behavior. Here are some screenshots: 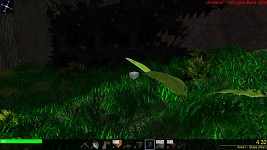 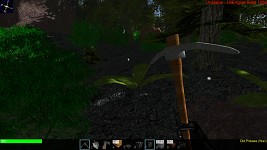 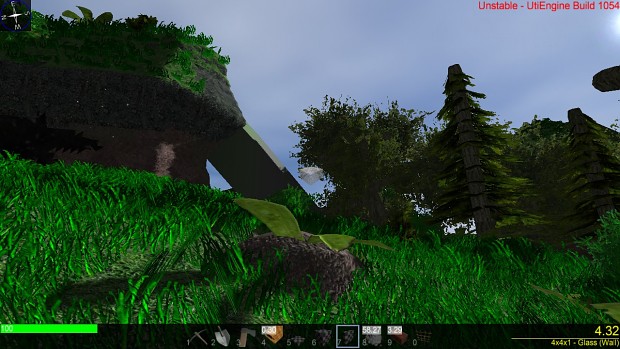 Our modeler also optimized the bear. Ok personally I must admit that I always had the impression that this wasn't a bear. It looked like a pig for me. And the reason for this was that the neck was to long. This has been corrected. And we also added collar bones to the bear and optimized the skeleton. I personally find it crazy that such small details can hugely affect the appearance of a model. Here are some screenshots: 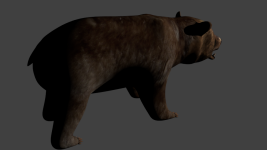 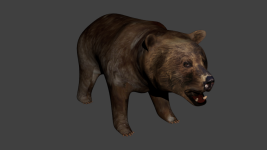 The skeleton for the bear is now finished. The armature was rigged yesterday. And today the bone weights where updated. Hmm, without good bone weights the movements of the bear look really …. unhealthy :-)

Last time one player asked if we will update the arm in the first person view soon. We want to do even more. We decided to create a complete character for our game and add third person support. For this we used MakeHuman to create Lisa.

I thought that it would be easier to create a good looking character. The first experiments looked like a bad plastic surgery. After this problem was solved we checked out several armatures which are available for MakeHuman characters. At first we used Rigify. But with this system we could not control the mouth or the eyes. So we now sticked to the basic MakeHuman armature. Here is a screenshot: 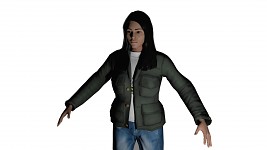 The clothes are basical from MakeHuman. We had to change the T-shirt and the hairs as they produced depth buffer artifacts.

We have to admit that we do not know much about her. We can only conclude some things which we see in the game. She seems to have the ability to resurrect herself when she dies. That of course also means that she is perhaps ageless. And she is then not a normal human being. Perhaps she uses nanotechnology to achieve this but this has yet to be revealed. And we do know nothing about her motives. In the current version of the game she is wearing black gloves.

We also checked out the possibility to use motion capture for the animation. A jump animation was successful applied to Lisa.

And we also searched the internet for additional assets to improve our wild life. We found a good deer and some other animals. But if we can we will create our assets by ourselfs.

The HDR rendering also makes progress. The basic pipeline is implemented. We are currently working on the basic+glare pipeline. But we did not do any bug fixing. Yeah, GPU debugger. This is not so much fun. There is also a bug in the shadow rendering algorithm which we also should find. So much work ...

We nearly finished the final design. I do hesitate a little bit to start with the implementation because when the design is not correct the code can be trashed. So I borrowed some books about design patterns from the library. I think we will use a similar design as the I/O system in todays OS kernels. The reason for this is that we want to allow multiple threads to access the world matrix. So we can use the full power of todays multi-core CPUs.

Yes we also continued with this. The network description for the entity class is finished. Now the player and the world class will follow. That is part 1 of 5 of the multiplayer implementation.

As we mentioned in the previous posts we are creating a test map. This time we improved the castle. Check out the screenshots: 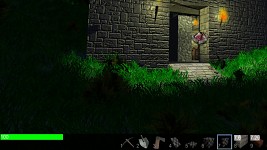 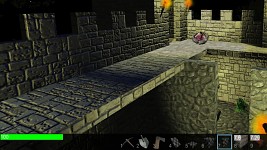 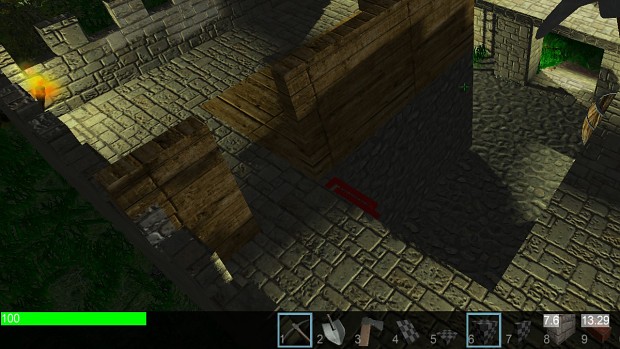 We created new entities which can be used in the creation of scaffolding: 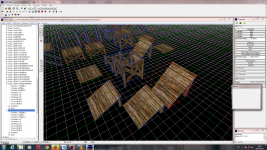 We also created a new linux pipeline in a virtual machine with Ubuntu 12.04 LTS. This is the same version which Steam uses. This will also ensure better portability with other Linux distribution. We also created special versions of the shared libraries. They will now be shipped with the game. This means it won't be necessary to install additional libraries if you want to use this game.

We know about Depth Map based SSS. But it is not needed here as the leafs are very thin. But for humans we will perhaps use this technique.